I could swear that I had been to Parrish Family Vineyards before for a dinner they hosted for the Cab Collective. However the property on Adelaida Road was new for me as it was for everyone else, only having been opened this past year. It nagged at me for about a nanosecond, then I was quickly caught up in everything this new discovery held for me. (One of which was seeing former SCVer Denise Criste living the dream, having moved to Paso and now working in the tasting room at Parrish!) 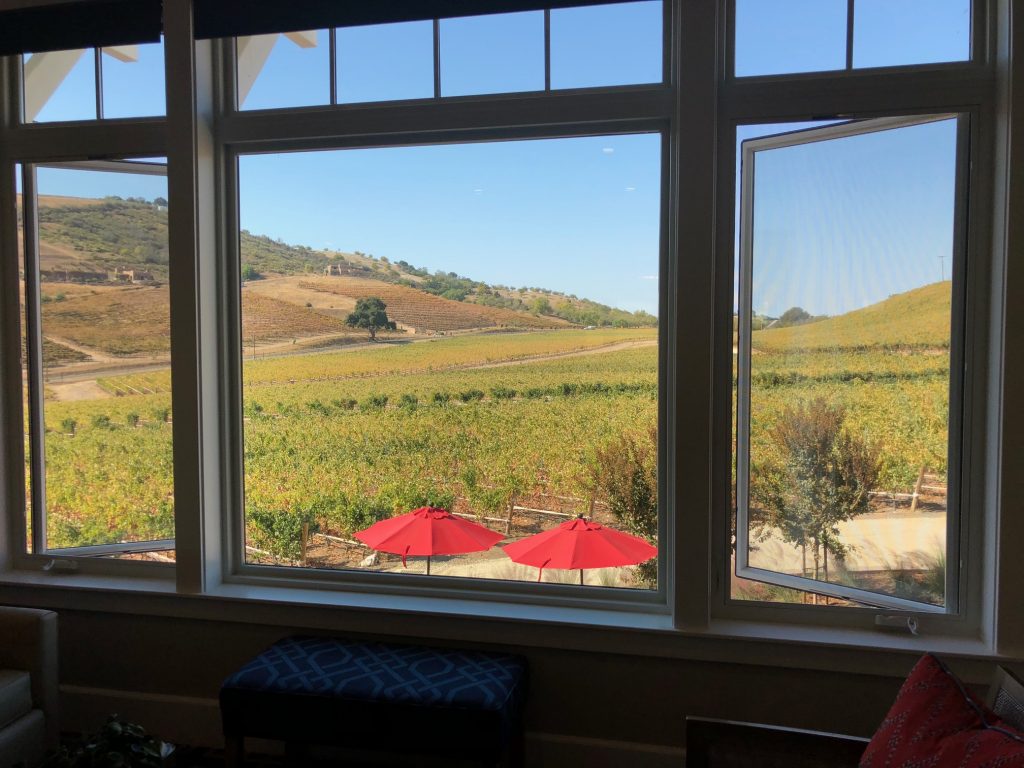 Took some photos of the calcareous stonework that contributed not only to a large wall but also to the terroir of the wines, and some of the bright red umbrellas – that could be seen from the road below – that sheltered many inviting groups of tables on the grounds overlooking vineyards.

The tasting room was welcoming. With many different cushiony seats to choose from, we learned that this would be a theme throughout. There were member’s only rooms, meeting rooms, dining rooms adorned with leather seating, balcony seating – the inside and outside seating options seemed endless. We learned that many people would move from one spot to another to enjoy their tasting, or to linger over a bottle for part of their day, some even circling back to Parrish for a second visit the same day as they are the only winery on Adelaida open until 6pm.

Membership options began with as little as a four bottle allotment and allowed for nearly monthly gatherings where you could reserve the exact spot you wanted to sit – I could definitely see a draw for a growing numbers of members.

We were shown a wall of photos and memorabilia that flanked both sides of the entrance to the tasting room that every guest will pass through. These items told a bit of a story of Earl Henderson, the grandfather of existing owner David Parrish, who had a love for golf (there is a small putting green for you to partake in the game if you so desire) and began cultivating grapes before prohibition.

David, before taking the mantle, was known for his work in trellising. At one point he had 24 patents for different trellis types for different fruits. He has seven active now. The winery made their first vintage in 2006. Coppola, L’Aventure, Clos Solene and others buy up their grapes. Learn more about Earl Henderson and David Parrish here.

While we toured and learned about Parrish we tasted through some of their wines. Bought a couple of bottles for home as well: