The San Francisco Competitions Double Gold Tour gives wine and spirits professionals a unique opportunity to taste the Competitions’ top winners and to discover the next trending tastes, styles and varietals we’ll be seeing in 2016… 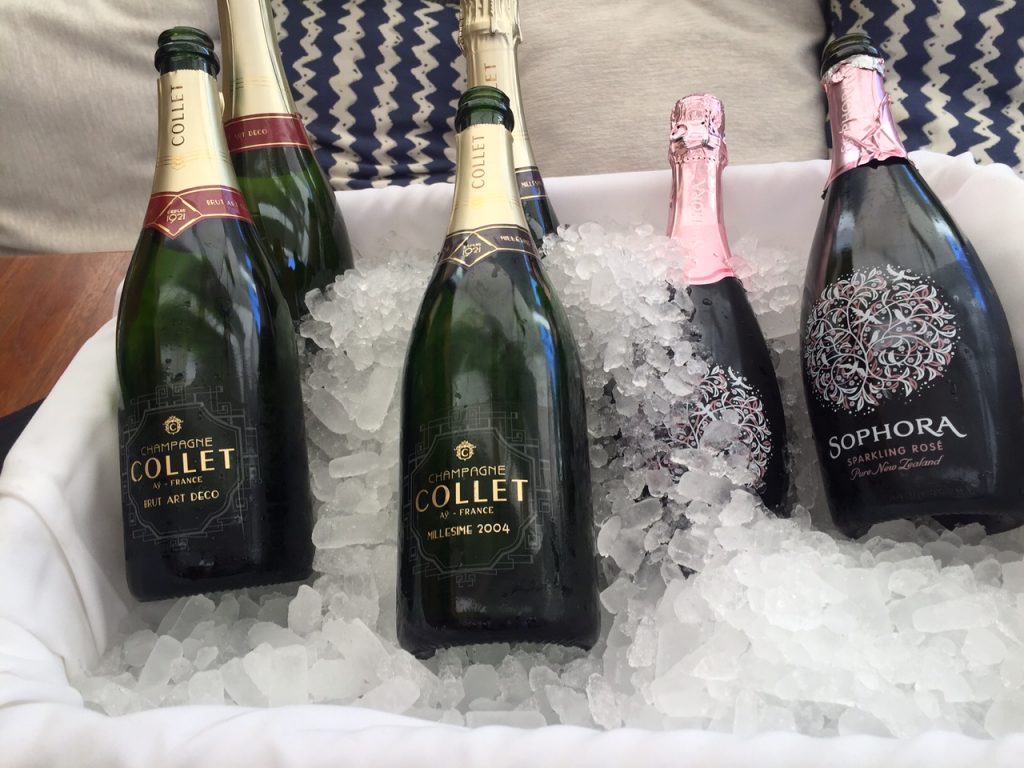 And with that said your trusty wine and spirits reporter headed over to Ocean Prime in the center of Beverly Hills to spend the better part of an hour investigating which of the Double Golds I thought our readers might like to try. (Warning: Some of these wines and spirits may not yet be available in your state.)

The “Perlis Team” from Eve’s Wine 101 was also covering the tasting. Michael and Karen were there to taste and make notes primarily on the wines, while I put my focus on the spirits…and a little vino too. This is my report, please keep in mind that this was a walk-around tasting so I was juggling pen, paper, camera and a glass so my notes are somewhat sparse:

Desert Dry Gin, AKA Commerce Gin. Arizona, USA. https://www.facebook.com/AZDistilling?fref=ts Loved the list on the back of what was added to this most interesting gin: Cardamom, Coriander, Cumin, Cinnamon, lime zest, Lavender, apple + eight more botanicals all from northern Arizona. Well done. Best thing I tasted all day. 98 Eve pts.

Shui Jing Fang Baijiu, Sichuan, China. Killer aroma and flavors, and the presentation, beautiful etched glass bottle set in it’s own wooden stand, set them apart. From the website: Baijiu is distinct because of its use of distilling yeast during the distillation process. It is also the only one of the four top distilled liquors to use solids in the fermentation process. 97 Eve pts.

Tepoz Silver Tequila, Jalisco, Mexico. I had to agree with the coasters they were giving out with a taste, they read “Fit for a God.” This triple distilled 100% agave silver tequila was, and I’m not kidding, the smoothest tequila I have ever had. 95 Eve pts.

Wemyss Malts 12 Year Old “The Hive” Scotch, Speyside, Scotland. After tasting this blend of 16 different single malts I wanted to try their two other single malt blends that were also medal winners. Too bad they weren’t there to taste too: Peat Chimney from the Islay and Spice King from the Highlands. 91 Eve pts.

Lagavulin 16 Year Old Single Malt Scotch, Islands, Scotland. I always think of my husband when I have a peaty scotch like Lagavulin. He calls it an “angry scotch” as he would have a glass after a particularly rough night at the fire station. There was nothing angry, except for the peat, in this scotch. Very smooth and welcoming. 95 Eve pts.

Nohrlund Strawberry Rhubarb Vodka Cocktail, Bottled Cocktails, Aarhus, Denmark. All three drinks from their cocktail program won medals and I was happy to taste, along with the Double Gold Strawberry Rhubarb, the Sea Buckthorn (Google that, I had to), Rose Hip and Rum and the Elderflower, Ginger and Gin. My favorite was the latter, and it reminded me a little of a Moscow Mule. The strawberry had such nice fruit, like a puree, I can see why it won the Double Gold. A collective 90 Eve pts.

Bauchant Liqueur, Product of France, “a blend of fine cognac and orange essence.” The gentleman that was tasting alongside of me thought it fit for a Margarita. I told him I like to use something this fine instead of vermouth in a vodka Martini. Either way you pour it it’s very fine stuff. 91 Eve pts.

TAO Vineyards, 2013 Cabernet Sauvignon, Los Angeles, CA. Well. This L.A. wine, come to find, is from a very small vineyard in Agoura Hills and can be found, possibly along with up to six of their other wines, for tasting at the Cornell Winery and Tasting Room. I was charmed by this Cab and will try and seek them out to taste their full lineup. 90 Eve pts.

Get a look at the labels via this 1-minute YouTube too.

Haven’t done a “round-up” article in a long time. That’s where I ask pals on … END_OF_DOCUMENT_TOKEN_TO_BE_REPLACED