Lucky for me winemaker Dusty Nabor, of Dusty Nabor Wines, is pals with Sculpterra winemaker Paul Frankel – in fact Nabor buys his Bentley Cabernet Sauvignon grapes from Frankel – and Nabor graciously offered to see about getting me an interview and a behind the scenes tour with Frankel. 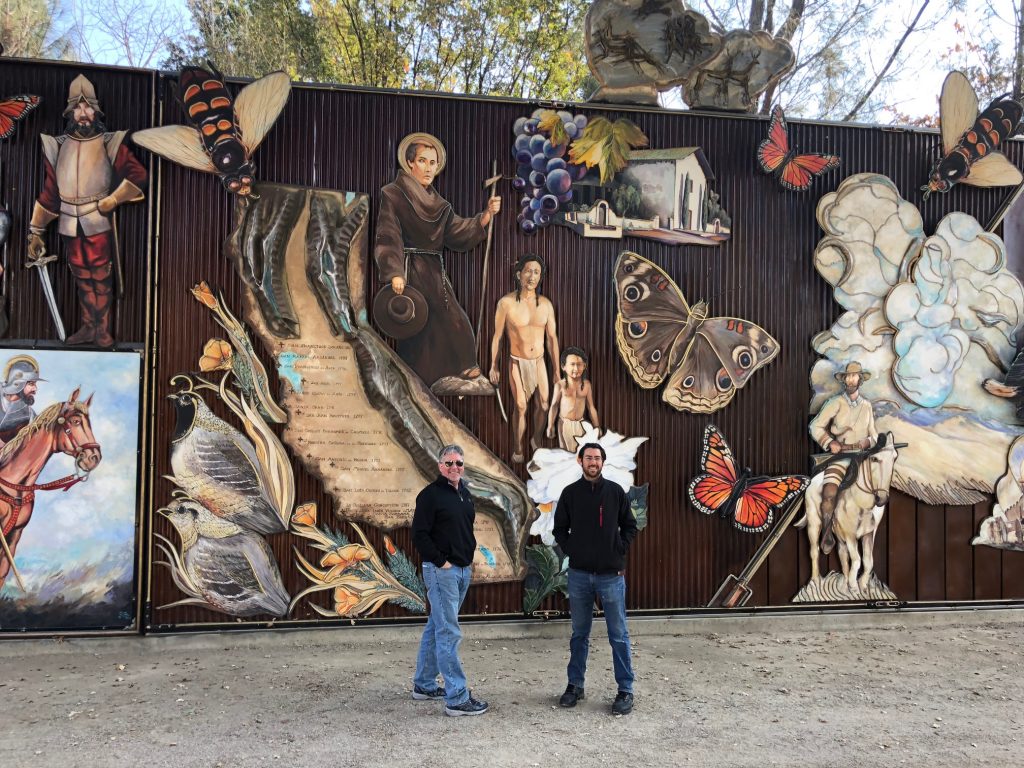 My husband and Frankel in front of the many metal art pieces at Sculpterra.

When we drove up to the winery, its reputation as a sculpture garden preceding it, I made a point to tour the grounds a bit and photograph anything I hadn’t already seen before. It’s quite an impressive sight, and I believe unlike any other winery in Paso or anywhere else.

We met up with Frankel who filled us in on some of what we were seeing. There are metal sculptures, railings, a new several-feet-tall “photo album” mural just getting ready to be filled in, racks and poles for bicycles and horses – predominantly created by Bob Bentley. More about the art and artists can be read here: http://sculpterra.com/our-art/

Frankel grew up at Sculpterra, and lucky for his father, he was bitten by the wine bug when he attended Cal Poly. Frankel said you have to love farming and winemaking. His father, Dr. Warren Frankel, is currently in India working as a medical missionary with the “His Healing Hands” organization.

The vineyard was planted in 1993, beginning with 90 acres, then they purchased 160 more. There are now twelve varieties of wine grapes under vine, and pistachio acreage as well. There is also a vegetable garden and fruit trees.

Viognier does well here, according to Frankel, and is their best selling white wine. Primitivo is the most popular in their blends, and their Port is well liked too. Harvest began on September 11 this year and ended on November 1st.

Their biggest issue: squirrels. Frankel believes there are thousands of them on the property. The have tried bombs, traps and even shooting. Now they have hired a person for the sole purpose of managing the squirrel population.

Interesting aspects on the winemaking: Frankel uses bed sheets instead of lids during fermentation. He believes the technique prevents volatility and too much alcohol in the resulting wine. They can do 10-20 tons a day for de-stemming. A lot the wines have a percentage of new oak influence. Frankel’s been at this since he was 21 and is now 26, “I enjoy the labor and (a winemaker) needs to be young. If you’re passionate (it all) works well.”

Frankel left us at the door of the tasting room and we were aptly cared for by Iddy (Isabel) Shirley. Tasting notes were once again provided, some of which I added to. These are the wines I especially liked in the tasting:

Notes of apple, peach and pear – quite refreshing!

I agreed: apple, peach, nectarine, white pepper. I could see why this was a favorite.

Eddie liked this one a lot. Notes of tea, cherry, clove and mint.

Brambles, blackberry, smoke, clove and chocolate. I loved the lush fruit and long finish. This was a top pick for both of us.

The grapes are grown below Bentley’s workshop, near where the winery is located some distance from the tasting room. Liked the brambly quality. Another favorite of Ed’s.

Besides blackberry I found it gamey and earthy, and it turned out to be my favorite wine in the tasting.

Loved this for its rich dark fruit.

Ed is not a port fan but he enjoyed all of the wonderful chocolate flavors in this one.

A few weeks ago I received an email from Naushad Huda, the “Voice of Modern Wine … END_OF_DOCUMENT_TOKEN_TO_BE_REPLACED