Both Linne Calodo and Denner had been recommended to us over the years to visit, but if you’ve been paying any attention to the growth in Paso Robles you know that there are now hundreds of wineries to choose to visit. In my earlier article on Parrish Family, as well as this one, it was the first time in all of our visits to the area we were not seeing any wineries we had visited before. Everyone has their favorites, and I myself felt guilty about not seeing some of mine on this trip, but I do it all for you, dear reader, so that you can explore something new as well.

So on a cool Saturday morning we set out to both for predominant Rhône blends and both by appointment only. 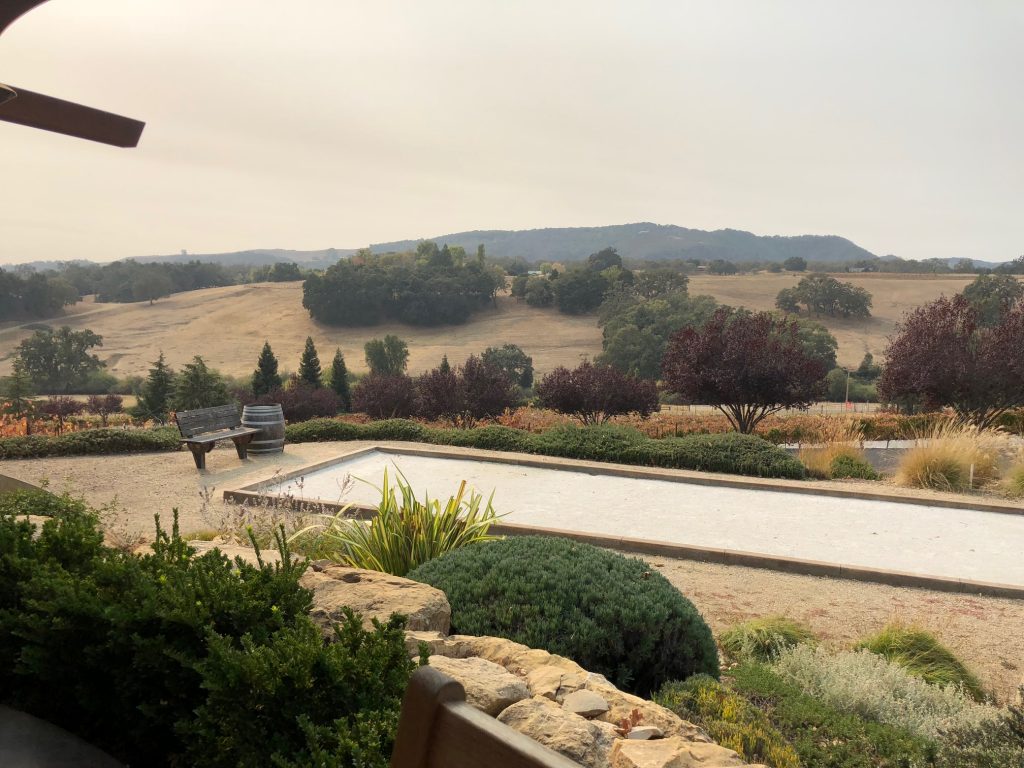 Linne Calodo is on the corner of 46 West and Vineyard Avenue, so it’s extremely easy to find. A short drive up the hill and you’ll find a medium-sized tasting room for guests that would like to either sit or stand through a flight.

Greeted with a menu of what we would be tasting – we knew it was ours as our name was printed on it – and a trio of red wine glasses.

We were expertly taken care of by Meghan Ball – Meghan is a new mom so she has taken a short break in her duties as assistant winemaker this year to take over as the Director of Sales. Meghan explained that guests were welcome to bring food to have for an outdoor tasting, there is sometimes live music upstairs that is enjoyed by tasters downstairs, couches and sitting areas are often used by members – as club members have always been the wineries exclusive buyers.

Linne Calodo owner and winemaker, Matt Trevisan, had switched his interests from airplanes to biochemistry – and started out with Justin Winery in 1995, the same vintage year that Wine Spectator awarded Justin Isosceles with a 100 point score. 1998 was Trevisan’s first vintage for Linne Calodo. Beginning with a 500 case production they are now at 5,000 cases. The vineyards are primarily dry farmed, all estate, they make eight to ten blends a year with four or five released twice per year, with an additional white and rose.

(I have no tasting notes on these wines as we were too busy chatting with Meghan all about the winery. I enjoyed everything, with a special nod to the 2016 Nemesis that had been opened 24 hour earlier. Meghan commented that the “first and last glass” of this particular wine “is a totally different experience”.)

Denner, just up Vineyard Avenue about ten minutes from Linne Calodo, has a large parking lot and several welcoming areas to taste both inside and out, a bocce court, trees, flower gardens and vineyards are all within view. We were told to take any seating area and chose a nice tall table outside to take in the sights.

Our entertaining and educational sommelier Yule from the Ukraine presented us with six wines to taste, and allowed us time with each before returning with a new wine. What we learned and tasted:

We began with a 2016 100% Viognier that I thought had perfect fresh fruit with a medium acidity. I also agreed with the provided tasting notes that described notes of orange and lime. Yule explained that this wine, and some of the others, had spent their months aging in large “cigar” barrels. I was familiar with these for their odd shape compared to the standard shaped barrel. Yule also explained that they allowed for less oxygen to reach the wine, and I presumed the large shape would also provide less oak notes in the nose and flavor.

Next we tried the 2016 Grenache with 81% Grenache, 9% Mourvedre, 9% Syrah and 1% Roussane. While our tasting notes described the wine as having aromas of cherry and raspberry I also found chocolate. The wine is all estate fruit, fairly dry, well balanced, and left me with hints of cherry cola on the palate.

Ron Denner, the owner of the property, started out being told that he wouldn’t amount to much by his father as his grades in his early school years were lacking. Between his college years, military service and owning more than one business – two involving moving dirt (the latter being the winery) Denner more than proved his father wrong. The wine named Ditch Digger is a shout out to that memory. The wine we tasted, the 2016 vintage, again an all estate wine was 50% Grenache, 25% Mourvedre, 5% Counoise and 5% Cinsault. While the tasting notes mentioned black licorice, strawberry, botanicals and spice my own palate found it to have also notes of crushed cherry on the nose and darker fruit on the palate. This wine had spent 16 months in neutral 500L and 600L oak puncheons – three times bigger than a standard barrel – allowing for less oak on the flavor.

The next wine, the 2016 Dirt Worshipper, had a great story for its namesake, and proved to be our favorite wine in the line-up. Lets start with the brief story: Yule got down on bended knee to show us what it looked like when the workers were planting the grapes that would eventually make up Dirt Worshipper, and you probably may have guessed it, yep, they looked like they were praying. The 2016 vintage was 97% Syrah, 2% Roussanne and 1% Viognier – and why use a white wine in a red blend? And why so little of it, would it make any kind of difference? Yule explained that the small percentage of white Rhônes would act as a stabilizer for their Syrah to maintain its color. Cool. I agreed with the tasting notes that showed white pepper and blackberries on the nose, and espresso and blueberries in the palate, I also found it very creamy. I also wrote down what I overheard another guest say, “If this is ditch digging we can agree he struck gold.”

The 2012 Syrah, with it’s gold ribbon on the bottle, was considered more of a library wine that can age longer due to more tannins. With notes of violets, blueberries, and white pepper on the nose and with the addition of espresso on the palate – we were in agreement with the tasting notes on our menu.

A final wine added to the lineup was the 2016 Sacred Burro of 100% Carignan. In this wine, Yule explained, the vineyard had been head trained, and since the grapes are susceptible to mold up to 80% of the fruit was cut off to allow only 20% for wine. In comparison, if left alone there would be 20 tons of Carignan harvested to an average of five tons for Cabernet Sauvignon. He further explained that without the head training, the mold could takeover other parts of the vineyard. As we went in for our taste – the wine was described as having rose petal and raspberry notes (I also found dark cherry) it would be easier to discern these aromas if we rolled our glasses, and then see if we could sniff the raspberry or cherry on the near side, and the rose botanical on the far end. It seemed to work. Something to try at home!

Note: I didn’t explain the time in oak for all of these wines, share their Vinous scores or the pricing. You can email me if you want further details: Eve@EveWine101.com or peruse their Facebook or website pages:

A few weeks ago I received an email from Naushad Huda, the “Voice of Modern Wine … END_OF_DOCUMENT_TOKEN_TO_BE_REPLACED