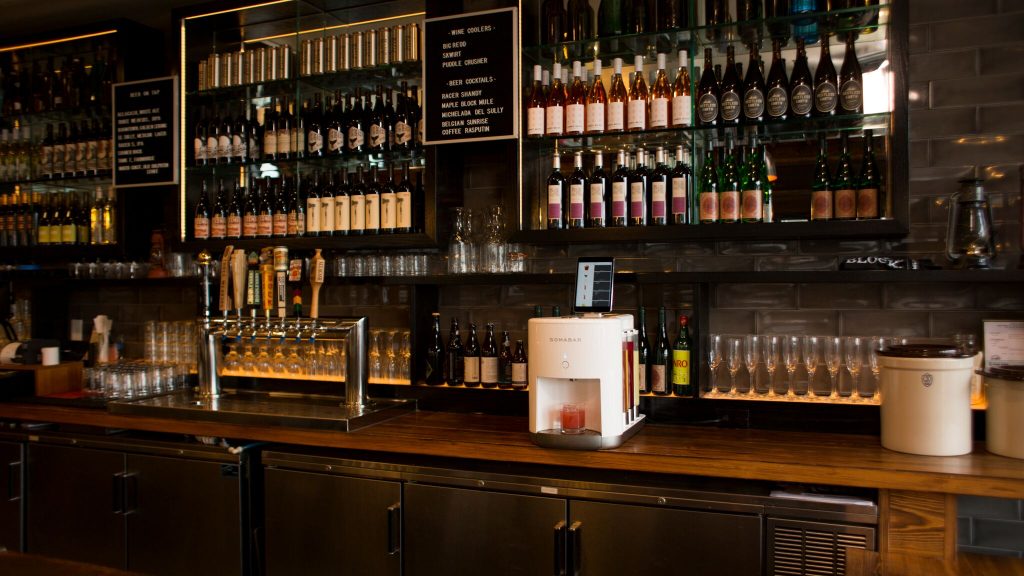 For a restaurant, that question is followed by a myriad of answers. Labor for starters. Most restaurants do not have bartenders or mixologists as installing a cocktail program can be a massive undertaking in terms of both time and resources. Liquor licensing is another. Full-liquor licenses in California can cost upwards of $500,000. Finally, there is waste and spoilage that account for 25% of inventory loss on every drink sold. The cocktail, formerly the highest profit generator for a restaurant, is facing stronger and stronger headwinds. Yet a Los Angeles-based startup is hoping to change all that with its public launch at select Gelson’s premium Wine Bars.

Somabar® is the world’s first robot bartender created for beer and wine bars and restaurants. After three years of development, Somabar announced the commercial debut of its robot bartender at the 2018 Western Foodservice & Hospitality Expo, where it was awarded the show’s highest honor; Best Product of the Year.

Why wine bars and restaurants? Restaurant and wine bar owners are familiar with endless regulation, yet liquor licensing and rules for human bartenders are among the most costly and complicated. Regulations vary by state, and costs can be dizzying, especially in areas that strictly limit the number of active licenses. In parts of New Jersey, the cost of a restaurant full liquor license has reached $2 million, yet even this mind-numbing number is becoming less rare as license-costs in cities such as Los Angeles and San Francisco continue to escalate.

Somabar’s mission statement is to help restaurants with wine and beer licensees (called a “type 41” liquor license in California) navigate this bureaucratic minefield with its robot bartender. Somabar specializes in beer and wine licensed restaurants that typically do not have a bartender nor a full liquor license. The beauty of the wine and beer license lies in the fact that they are unrestricted in number by the California Department of Alcoholic Beverage Control, can be issued in a matter of weeks and cost as little as $500. And Somabar helps wine bars and restaurants make the leap from serving just beer and wine to serving highly profitable cocktails at minimal effort and cost. Operating under a restaurant’s beer and wine license, Somabar utilizes ≤ 24% ABV low-proof spirits such as agave wine and soju to mirror traditional cocktails like the margarita and cosmopolitan, and uses over 20 other low-proof varietals to craft practically every other cocktail imaginable. Somabar is also a master mixologist, with a growing library of thousands of low-proof cocktails, each created in less than 10 seconds, with no additional staff training required. Existing waitstaff (or any employee) can pour consistent and professional cocktails at the touch of a button. Somabar empowers restaurants to reduce their pour costs to under $1 per cocktail, while such cocktails’ average sale price ranges from $5 to $18.

Somabar launched at select Gelson’s Wine Bars in December and is now being made available to all Los Angeles area restaurants with “type 41” wine and beer licensing. You can see Somabar for yourself at the Gelson’s Premium Wine Bar at Westfield Century City Mall as well as Gelson’s Manhattan Beach and Silver Lake locations.

About Somabar:
At Somabar, our mission is to empower restaurants, bars, hotels, and public and private venues to serve thousands of different professional cocktails, each in seconds, at a dramatically lower cost and without the need for significant training or set-up. Somabar was founded in 2015 by Dylan Purcell-Lowe and Christopher Hameetman, who have since built a team of industry leaders to bring such vision to fruition. Somabar is located in Los Angeles, California.