I’ve known Rick Pratt, owner and winemaker for the new Entourage label by Two Papas Wine, for a few years now as he and his wife Teresa are one of the wineries that participate in Sunset in the Vineyard. 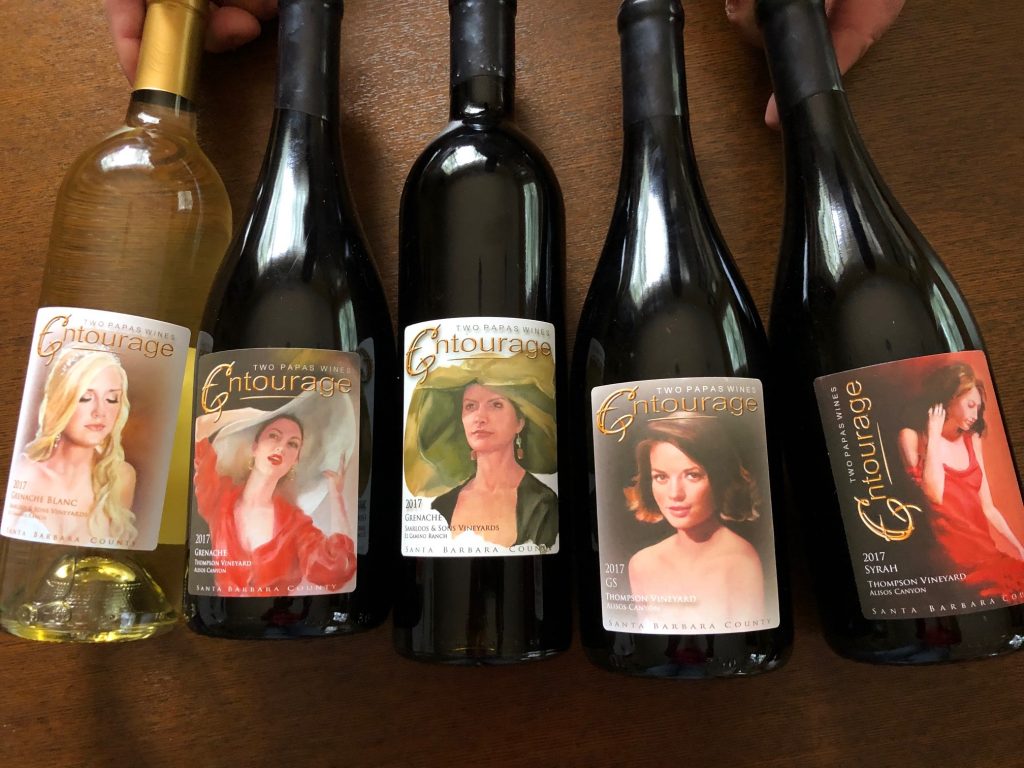 I’ve come to learn that Pratt’s wines are made from all Santa Barbara County grapes, that he makes the wines at Flying Goat Winery in Lompoc, and besides the event I mentioned you can also find his wines at Marston’s, Buellton Wine and Chili Fest, Santa Monica Fest and Sierra Pelona Wine Fest.

Pratt makes 240 to 320 cases per year of five varietals. Current releases (tasting notes below) are from 2017: Grenache Blanc, two different vineyards for two Grenache, a Grenache Syrah blend and a Syrah. Next up and in barrel now are the 2018s: all the same except that instead of the Grenache Syrah blend Pratt will be releasing a Grenache, Syrah, Mourvedre (GSM) blend.

Most of the grapes come from the coveted Thompson Vineyard. Not to be confused with Thompson green table grapes, grapes from the Thompson vineyard are known to be the top Rhônes in the state, possibly in the country, according to Pratt, which he says are also wine critic Robert Parker’s favorite.

Even my fellow wine writer has reviewed Pratt’s wines and said, “…with Two Papas Wines, we may have a King of Grenache here in Santa Clarita.” Rusty Sly, February 1, 2019 http://www.slystateofwine.com/article

Tasting (Collective notes made with the Wine-y Women Meet-Up group. Some of their descriptors are in quotes. Aromas and flavors separated by;)

Grapefruit, fruit cocktail, tangerine and a hint of stainless steel; Green apple, dried apricot, lemon-lime, medium acid and that bit of steeliness. This was my favorite.

Pratt commented, “I love wine and talking about wines, just want to cover my expenses.”

(A note on the pretty ladies on his labels: The one with Natalie Wood on it has been granted permission for reuse, the others are models, including the lovely blond that is the Pratts’ daughter-in-law and the brunette in the large green hat is their daughter.)