From the Scotch Whisky Experience in Edinburg, Scotland I had learned, “There was a moment, a hesitation, when those single malt fans, like myself, paused and thought, heck that master distiller is doing an incredible job. We need to give blends more credit! Single malt Scotch whisky wasn’t as popular as Irish whiskey until the master distillers created blends.” 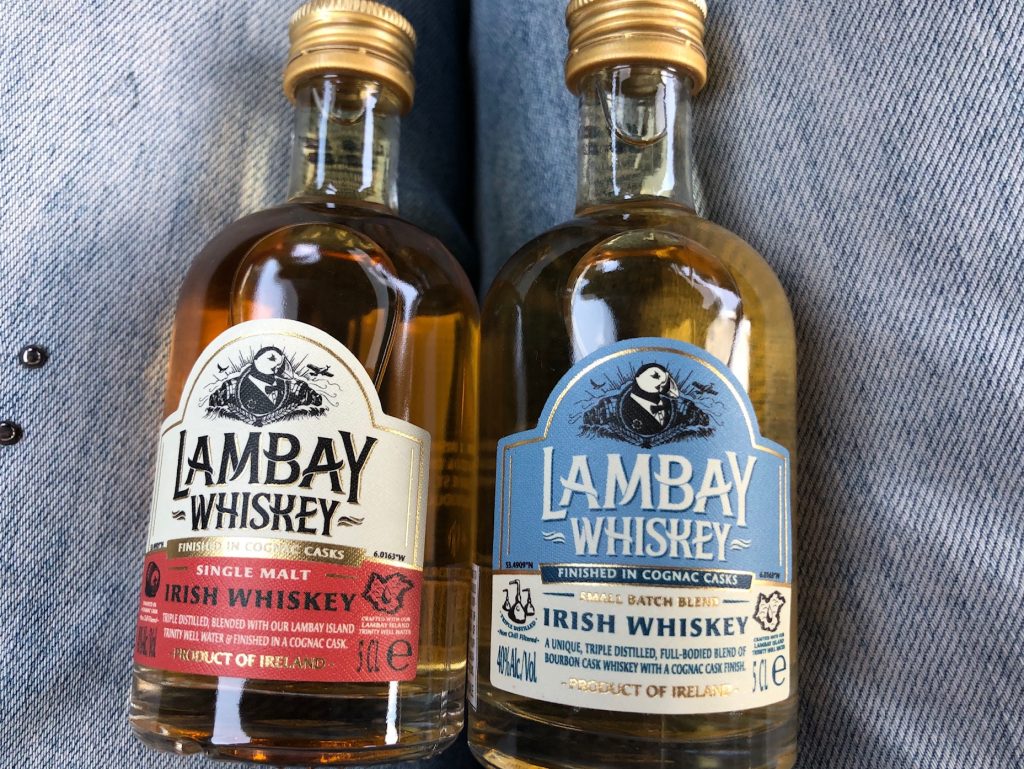 This “a ha” moment, in learning that Irish whiskey was by far more popular than Scottish whisky gave me great pause. In my own tastings of whisky from both areas I found Irish whiskey slightly sweeter than the Scottish counterpart, but then again I haven’t had as many Irish whiskeys compared to the number of Scotch whiskeys I’ve tried.

Recently I was offered two from Lambay Whiskey to sample. (Note: if the whiskey is made anywhere other that Scotland they must use, for the time being, the spelling with the e.) These are my tasting notes on two single dram samples I was sent, both finished in Cognac casks, sampled with my Neat whisky glass:

Flavor: slight burn on the palate but not enough to need water, walnut, hazelnut, butter, dried apricot, and with a spicy long finish. Nicely balanced. Would enjoy this with smoked oysters or vanilla ice cream, depending on my mood.

Aroma: more fruit on the nose than the blend with banana, apricot, orange and pear, followed by a little tropical fruit like kiwi, jasmine – or some other floral component – milk, toasted almonds and oak.

Flavor: sweeter than the blend, spicier too, darker and deeper with flavors of toasted oak, not the fruit I found on the nose with the exception of banana, dried leaves, cigarette on the finish. I felt about this whisky like the way I’ve felt about some wines: I get a real big kick when the nose is so different from the flavor. Just makes me want to spend more time savoring it. Would enjoy with cheese and charcuterie and something with dark chocolate for dessert.

Two distinguished families, a new kind of Irish whiskey, and the island that inspired it all.

Lambay Island is a peculiar paradise, a mere three miles off the coast of Dublin. Lambay, a veritable odyssey of oddities, is also home to a herd of grazing cattle, an improbability of puffins and an even more improbable troupe of red-necked wallabies.