SOLIGHETTO – The UNESCO (United Nations Educational, Scientific and Cultural Organization) Assembly has officially declared the Prosecco Hills of Conegliano and Valdobbiadene the 55th Italian “World Heritage Site”. The declaration was made at the 43rd session of World Heritage Committee in Baku, Azerbaijan. 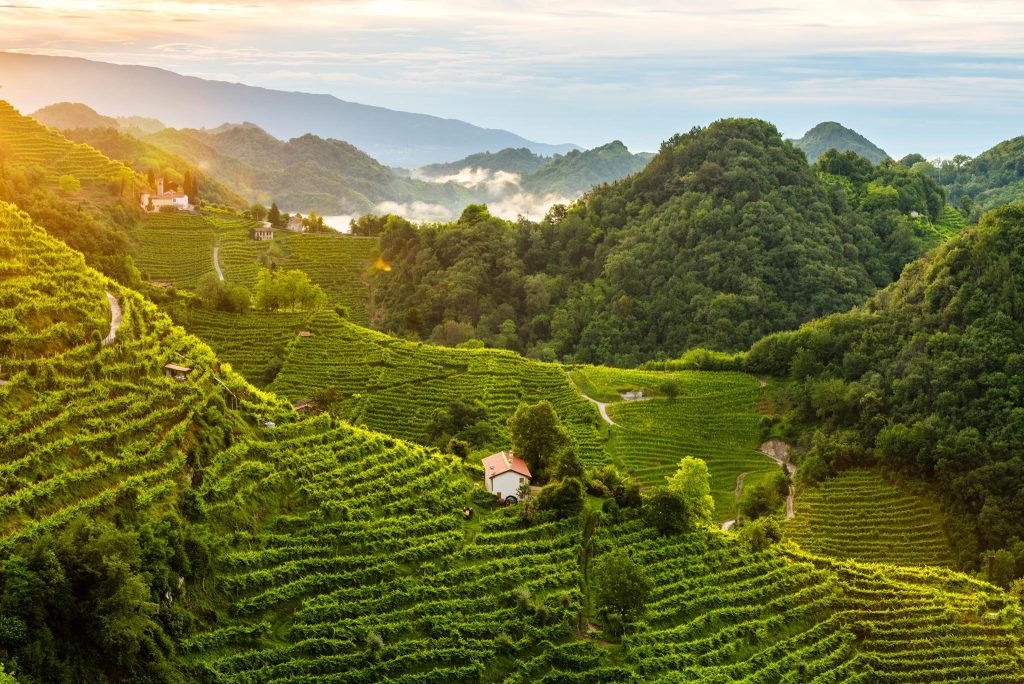 Innocente Nardi, President of the Consortium for the Protection of Conegliano Valdobbiadene Prosecco DOCG, expressed “our profound satisfaction and immense joy at the declaration of the Prosecco Hills of Conegliano and Valdobbiadene as a World Heritage Site. In Baku, the Unesco World Assembly bestowed upon our hills this coveted recognition, thereby making them the 55th Italian site to be protected and safeguarded due to the uniqueness of its cultural landscape. It is thanks to the work carried out by an exceptional team led by the governor of the Veneto Region Luca Zaia, with the contribution of the competent Ministries and impeccable work of the scientific committee (chaired by Mauro Agnoletti) and not least, the support of the Italian UNESCO Delegation, that we have achieved this goal. Speaking of goals, this recognition should not be seen as a destination, but merely as an important step on a journey towards enhancing the cultural, artistic, and agricultural heritage of this small area, known for its principal product, Conegliano Valdobbiadene Prosecco Superiore.”

The nomination process lasted ten years (in line with the average wait-times experienced by other registered sites). The process saw the emergence of a solid cohesion amongst the interested parties within the Prosecco Hills of Conegliano and Valdobbiadene, from the various municipal administrations and trade associations, to the local entrepreneurs, right down to the area’s residents. Nardi said, “It is this enthusiasm and dedication that has enabled us to achieve our objective.”

Nardi credited the producers that make up the Consortium of Conegliano Valdobbiadene Prosecco DOCG as the driving force and soul of the nomination every step of the way. “Right from the beginning, and throughout the entire nomination process, they never wavered in their belief in the uniqueness of our landscape, with its vineyard-embroidered hills and inaccessible slopes that require such hard and entirely manual labour.
buy nolvadex online buy nolvadex online no prescription

It is the commitment of generations of wine producers working in the vineyards, forging the ‘patchworks’ that we see today, as well as the characteristic ‘ciglioni’ [small plots of vines on narrow grassy terraces] which distinguish our viticulture, and therefore our territory, that has led to UNESCO recognition.”

Nardi added, “As of today, it is the responsibility of us all, but first and foremost that of the Consortium for the Protection of Conegliano Valdobbiadene Prosecco DOCG, in harmony with the newly established site management association, to focus on the conservation and maintenance of the registered landscape assets, while paying particular attention to the UNESCO guidelines for their protection and enhancement for future generations, in accordance with the objectives aimed at achieving balanced and harmonious economic and social development.”

The objective of the UNESCO honor involves the sustainable development of the registered area, which will be made possible thanks to a management plan drawn up in agreement between all relevant private and public institutions within the region. For years, the theme of sustainability has been visible in territorial government plans – thanks to the collaboration of entrepreneurs, wine producers and public administration along with the coordination of the Consortium for the Protection of Conegliano Valdobbiadene Prosecco DOCG – for the protection of the local environment and its inhabitants.

Top of the list for the Protection Consortium and the parties involved is the controlled development of tourism in the territory. In fact, particular attention will be paid to tourism because of its positive economic impact, while also focusing on how to sustainably manage the impact of increased travellers to the region.

The Hills of Conegliano and Valdobbiadene is the 10th site in the world to be registered under the category of “cultural landscape,” and is characterized by three unique attributes, based on different geomorphological and cultural characteristics, compared to the other eight territories (Alto Douro,Portugal; Tokaj,Hungary; Pico Island,Portugal; Lavaux,Switzerland; Langhe Roero and Monferrato, Italy; Champagne, France; Burgundy, France; Saint-Emilion, France; Wachau, Austria). All ten of these sites are “evolutionary cultural landscapes, visible results of the interaction – a vital, constantly evolving interaction-, between man and the environment.”

“I am extremely proud because UNESCO recognition is confirmation of the unique value of the Hills of Conegliano and Valdobbiadene landscape, fruit of man’s work in harmony with nature,” concluded Nardi.

About the Consorzio di Tutela del Conegliano Valdobbiadene Prosecco Superiore DOCG
The Consorzio di Tutela del Conegliano Valdobbiadene Prosecco Superiore DOCG is the private body, founded in 1962, that guarantees and controls adherence to the production regulations for D.O.C.G. Conegliano Valdobbiadene Prosecco Superiore. The sparkling wines produced on the hillsides between Conegliano and Valdobbiadene, in the Province of Treviso, obtained Denominazione di Origine Controllata status in 1969 and the Denominazione di Origine Controllata e Garantita in 2009. The production zone includes 15 municipal areas: Conegliano, San Vendemiano, Colle Umberto, Vittorio Veneto, Tarzo, Cison di Valmarino, San Pietro di Feletto, Refrontolo, Susegana, Pieve di Soligo, Farra di Soligo, Follina, Miane, Vidor and Valdobbiadene. The Consortium, whose current President is Innocente Nardi, has its headquarters in the village of Solighetto in Pieve di Soligo. It groups together 185 sparkling wine producers and includes all the categories in the production chain (vine-growers as well as vinifying and bottling companies). It operates principally in three areas: protection of the product, its promotion, and sustainability of production. It carries out these tasks both in Italy and abroad, promoting knowledge of the product through educational activities, the organization of events and relations with the press.

VERONA, ITALY (PRWEB) - The CourseJuly 2022 marked an exciting foray into the UK … END_OF_DOCUMENT_TOKEN_TO_BE_REPLACED