“When I first met Matt Kettmann a few years ago, he was pretty laid back, but very engaged with Santa Barbara County wine. He turned on a new level of commitment to the wine region when he decided to write a book with photographer Macduff Everton, longtime chronicler of the area with candid, off-center, fun, and telling images. This is a great and precise exposition of a great and abundant wine region, Santa Barbara County.”— Jim Clendenen, Au Bon Climat

Santa Barbara, CA – Unlike Northern California regions like Sonoma and Napa, where countless pages in numerous books have waxed on about their people and places, Santa Barbara wine country is decidedly lacking in books about the region, with just a handful published over its entire modern history. That’s changing this year with the publication of Vines & Vision: The Winemakers of Santa Barbara County, an intimate yet sprawling 632-page study of more than 100 wineries and vineyards in the region by writer Matt Kettmann and photographer Macduff Everton. 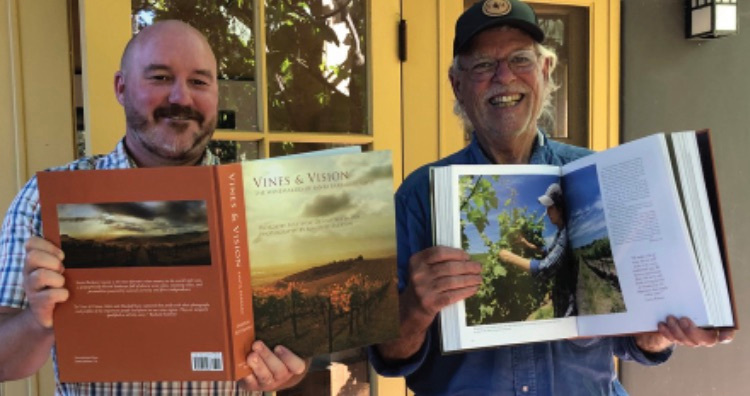 Santa Barbara County winemaking pioneer Richard Sanford (Founder, Sanford Winery, Alma Rosa Winery) who penned the book’s forward, says, “In Vines & Vision, Matt and Macduff have captured that pride with their photographs and profiles of the important people and places in our wine region. They are uniquely qualified to tell this story.”

“This felt like an opportunity to do my part in showing others what makes our region so honestly special, from the unique geography to the colorful characters,” says author Matt Kettmann (editor at The Santa Barbara Independent and Wine Enthusiast), who’s been covering the region as a journalist since 1999 and reviewing more than 150 Central Coast wines every month since 2014. He collaborated on the project with renowned photographer Macduff Everton (National Geographic, Conde Nast), who has photographed the area’s winemakers and vineyards since the early 1990s. After working together on Around the Table, a book about The Lark, a popular Santa Barbara restaurant, the two plotted out plans for a wine book over pints of Guinness in the fall of 2017.

“It’s been a longer than expected haul,” says Kettmann of the process. “We’ve spent almost three years corralling grape growers and winemakers for photo shoots, interviewing so many of them again, and, in some cases, hanging out for the first time.”

The results are riveting reading, with winemakers, farmers, and vineyard workers sharing their stories in ways that are often unexpectedly candid. While exploring the vineyards, Everton made fast friends with the many Spanish-speaking workers, as he’d spent so many years of his career covering the Maya people of Mexico, as detailed in his book The Modern Maya Incidents of Travel and Friendship in Yucatán (Univ. of Texas Press).

“Macduff made an immediate and deep connection with the hundreds of farmworkers who do the hard work in the vineyards every day and began shooting portraits of them as well, toting a portable backdrop along to every visit,” explains Kettmann. Those efforts expanded into a separate chapter called “El Buen Equipo,” or “The Good Team,” which features those farmers as well as people in every other role required to bring a vintage to market, from PR pros and marketing executives to wealthy proprietors.

With over 100 chapters, Vines & Vision: The Winemakers of Santa Barbara County focuses on the people, places, history, geography, and diverse culture in one of America’s leading wine regions. It shines a bright light on both familiar and famous faces from the region, as well as the industry’s often unsung heroes; the laborers, farmers, office workers, and numerous others who are vital to and instrumental in taking each and every vintage to market. Because of its comprehensive nature, Vines & Vision will be the primary reference text for this region for decades to come.

Lane Tanner, whose eponymously named brand was synonymous for years with the Santa Maria Valley appellation, says,  “Macduff and Matt’s new book is not only a definitive informational source, it delivers seriously fun facts that I have never seen in print before! Super cool read!”

“In a culture increasingly marked by quick sound bites of information and abridged attention span, we seldom have the privilege to experience thorough investigation and discovery,” says winemaker Greg Brewer (Brewer-Clifton, diatom, Ex Post Facto). “Vines and Vision is one of those rare examples which demonstrates a metered pursuit to portray a multi-faceted representation of Santa Barbara County winegrowing. The diversity of this landscape is only rivaled perhaps by the variety of its people which requires not only patience but also a keen eye to carefully uncover.  Through their tireless efforts, Matt Kettmann and Macduff Everton have done just that to produce a stunning work which harnesses the intensity of the topography and intimately captures the passion of those working within. The trust and intimacy that they have forged with everyone in Santa Barbara is shared throughout each and every page of this significant work that will forever hold a vital position in the history of this unique area.”

The book also includes essays on the history of the region (bolstered by Everton’s treasure trove of older photos), an exploration of Santa Barbara’s unique geography, descriptions of each appellation, and coverage of an entire growing season, from pruning to bottling. Featuring intimate portraits of winemakers, the book is very personal in nature, driven by the people and places that make Santa Barbara wine country so special.

“This insightful book captures the essence of Santa Barbara County’s soul,” said sommelier and winemaker Rajat Parr. “Matt Kettmann and Macduff Everton dive deep into the terroir of the region and showcase its trailblazers. A groundbreaking resource for the Santa Barbara wine country.”