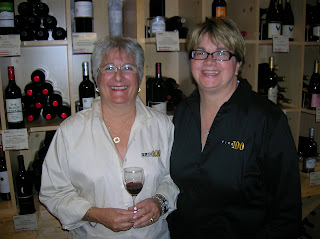 While my editor, Michele Buttleman, learned about what people were Savoring on the menu and which venues they were Strolling through, I got to do what I do best: Sip the wine from Santa Clarita finest merchants along Town Center Drive during the new Soroptimist’s first fundraising event benefiting Sheila R. Veloz Breast Imaging Center:

John R. Kelley, of Raven Oaks Vineyard’s, poured 2001 Cabernet Franc and 2001 Syrah in the cool interior of Bella Sport. Both varietals were grown in the Sierra Foothills of Northern California. Vino 100 owner Lil Lepore, alongside John, served the aptly named Hope Chardonnay and Shiraz. Hope wines give 50% of their sales, twice a year, back to charitable causes, and Lil contributes as well. We enjoyed all of the wines while Peter “the Goose” Goosens strolled over and helped fill in.

Lee’s Wine Bistro patrons were handed stemless wine glasses for their choice of three from the four varietals offered: a unique Wolfgang Gru-Vee Gruner Veltliner white wine from Austria, St. Francis Chardonnay, Kenwood Pinot Noir and Kenwood Meritage. The Gruner Veltliner being the perfectly crisp apple I needed in the heat of the day, followed by the pleasant bouquet of the Meritage.

Loose Goose wines sparkled beside the elegant jewels of Ro, Ma in the Goose’s large logo goblets. April Price chatted while pouring a delightful King Frosch Riesling, then a Stonewood Chardonnay, Leona Valley Cab, the count-on-it smooth Silkwood “Red Duet” with its blend of 50% Cab and 50% Shiraz and finally a Craneford Allyson Parsons Shiraz that April knew I would love.

Salt Creek Grille’s Greg Amsler was on hand to help serve a Coppola Chardonnay, Pepi Pinot Grigio and a Sterling Cab. The Pepi Pinot Grigio, new for me, was delightfully refreshing. The Sunday Brunch crowd didn’t take notice of the new crowd of wine drinkers eavesdropping on their live band, and live WAVE radio coverage, that promised to go as long as the event.

Valencia Wine Company, always doing it right, didn’t stick to the plan of offering 3 tastes. Guy Lelarge, on his normal Sunday off, shone in what sippers Pam and Rich Jaffke thought was an intentionally matched sapphire blue silk shirt and watch…it must have been the wine. We were offered no less than 10 pours of everything Tobin James Cellars had to offer: Merlot, Cab, Syrah, James Gang Zinfandel, Liquid Love alongside Handley’s Gewurztraminer, Pinot Gris, Pinot Noir, Chardonnay and Riesling.

Wine 101 reader Kathy Crone said she met winemaker Toby James when she was pregnant. He told her that she would have stayed pregnant forever if she drank Liquid Love. So that’s what she did today, with all of us, pregnant with wine.

At 4:30 the raffle held at Ro, Ma got started. Guy bought one ticket and headed over to check it out with everyone else. He was surprised to win a trip for 4 to a winery, and in front of everyone, Guy realized that he didn’t need to win and gave it back.

That’s what it’s all about. 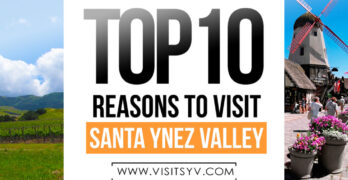 (SANTA YNEZ VALLEY, Calif.) — When it comes to travel trends for 2022, midweek … END_OF_DOCUMENT_TOKEN_TO_BE_REPLACED