Sydney, Australia (Newswire.com) – ​​Vino-lovers rejoice, the world’s most awarded wines and wineries have been revealed in the much anticipated release of the 2017 World Rankings of Wines & Spirits (WRW&S) Report.

Released annually by the World Association of Wine Writers and Journalists (WAWWJ), the report is a definitive ranking of the world’s most awarded wines, wineries and wine regions. The ranking is the only one of its kind to benchmark wines on a global scale.

“The annual list aims to reward the efforts of the World Wine Companies who compete and demonstrate consistency across the numerous wine shows around the world,” said WAWWJ Chairman Leonardo Castellani.

“Out of 700,930 wines evaluated in the competition, 150 wines received the prestigious accolade for ‘Wine of the Year’. This is the main distinction of the WRW&S and is only given to those wines that receive 125 points minimum over the course of the year.”

Of the competing countries, France, USA, Spain, Italy and Australia rounded out the top five.

Commenting on being named the ‘Most Awarded Winery in the World’, Mitchell Taylor, Third- Generation Winemaker and Managing Director of Wakefield Wines said:

“International wine competitions and rankings like the WRW&S are proof of just how exciting Australian wine is becoming internationally. Through our tastings and events across the country, we’ve found US wine drinkers to be very open and interested in trying wines from all over the world.”

The WAWWJ compiles the rankings in the report by totaling the trophy and medal results from a selection of 80 international wine shows around the world. These shows make up the top wine competitions from the more than 495 competitions around the world, with competing wines from more than 5 countries. The results are then tabulated and scored independently by the WAWWJ and posted to the organization’s website each year.

The 2017 World Ranking of Wines and Spirits Report

After four decades in the Clare Valley, Wakefield Wines remains proudly family-owned and run (and a founding member of Australia’s First Families of Wine). The vision to build Australia’s most successful family owned wine company was set by Bill Taylor who, in 1969, purchased land with his brother John and father Bill Taylor senior by the Wakefield River in Auburn. This vision has been nurtured and expanded by the next generation, Mitchell, Justin and Clinton Taylor, who all have key roles in the organisation. Wakefield challenges world standards through its progressive practices, most evident in the family’s commitment to bottling all wines from the 2004 vintage under screw cap, the first major Australian wine company to do so. Wakefield ability to meld tradition and innovation results in regular recognition, both in Australia and on the highly competitive world stage. In September 2009, Wakefield Eighty Acres range became the world’s first 100% carbon neutral wine range in accordance with the international standard for lifecycle assessment ISO14

New York, NY – Attention, wine lovers: the Wines of Brazil have made their way to the U.S. and are ready to take the country by storm. Internationally celebrated for its soccer players and its Rio Carnival, Brazil is also home to a variety of flavorful wines that will delight American consumers in search of young and fresh wines, at great value for money. 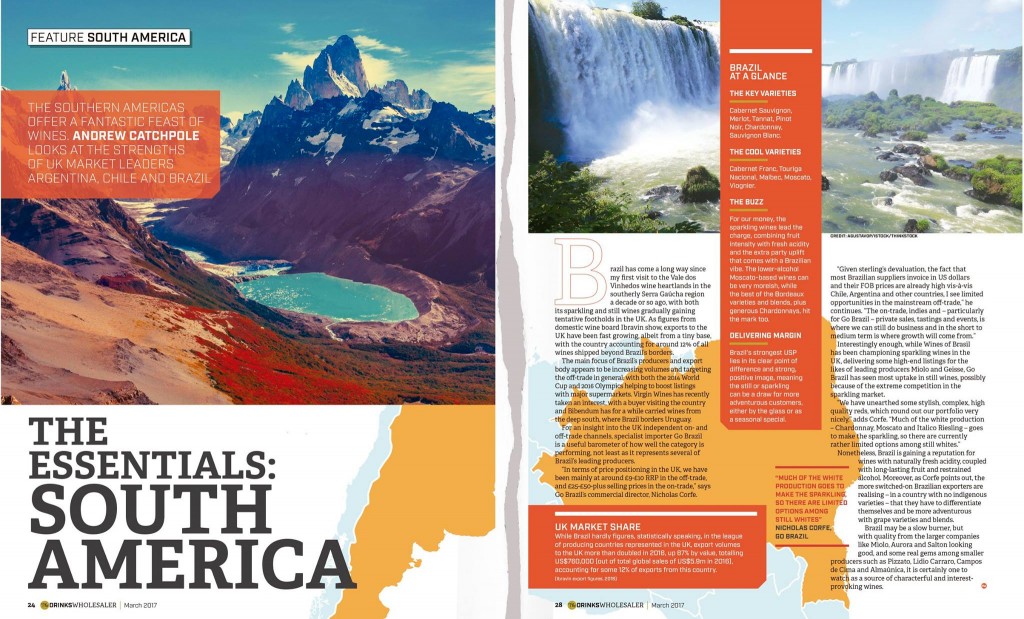 In a region known for its at times excessively powerful wines, Brazil stands out for its production of lighter, friendly and easy-drinking wines. Brazilian wines offer a surprising and high-quality alternative to your usual wines choices, being generally pressed from the varietals you love: Chardonnay, Pinot Noir, Merlot, both still or sparkling. Embodying the soul of the country, Brazilian wines are lively, aromatic and colorful, and will be the life of the party!

Shake up your habits and pop a Brazilian sparkling wine for your next festivities. Characterized by an exceptional acidity and freshness, they are ultimate crowd-pleasures. Many of the producers follow the méthode traditionnelle – the same as Champagne – Brazilian sparkling wines are mainly produced from Chardonnay, Italic Riesling, Pinot Noir and Muscat. Aromatic and vivacious, they can be enjoyed on their own as an aperitif, or with all kinds of every day food such as sushi and light salads.

Brazilian reds will delight every red wine lover: from fruity to earthier reds, the region is home to a palette of vibrant reds pressed mostly from Merlot and Cabernet Sauvignon, which produce elegant and structured wines. With lower alcohol contents than similar New World wines (around 11-12.5%), they can be sipped during the day, without fears of headiness. The wines’ aromatic flavors combined with mild tannins make them a perfect addition to the dinner table: fresh and young, they will not overwhelm your meal’s flavors. Sip them with a BBQ-grilled meat to feel like a proper Brazilian enjoying a churrasco, the country’s iconic ember-grilled steak.

A look inside Brazil

There are six wine regions in Brazil, covering an almost 2,500-mile distance along the country’s eastern border. 90% of the wineries are in Rio Grande do Sul, the state located in the southernmost part of Brazil,  bordering Uruguay. The state is also on the same latitude as Argentina and South Africa:

About Wines of Brasil

The main mission of the Wines of Brasil project is to promote the quality of Brazilian wines in the international market. To achieve this goal, its work starts within the wineries, providing producers with guidance on how to export, which results in promotional campaigns in different parts of the world, including the participation in wine fairs and direct contact with trade agents and opinion makers.

The Brazilian wineries produced for the export market over 2.2 million liters and commercialized to 36 countries from January to December 2016. The exports to the USA market have increased 34.64 % in 2016.

Not familiar with spirits from Ukraine? No worries, neither am I, which made it … END_OF_DOCUMENT_TOKEN_TO_BE_REPLACED