George M. Taber, made famous in the wine world for writing about how Napa winemaking beat out France in the infamous Judgment of Paris tasting, has a new offering, it would seem, for those of us thwarted in our wine buying by the current economic woes felt nationwide, in his book A Toast to Bargain Wines.

For me, having been blessed with a well-stocked cellar, and unsolicited wines to review, I have to tell it to you straight right now: I’m not buying [ yellow tail ] after reading this book, but I was amazed to learn so much about the maverick winemakers behind the popular brands, the up and comers and some behind-the-scenes stories…enough so that I wanted to give you a sip: 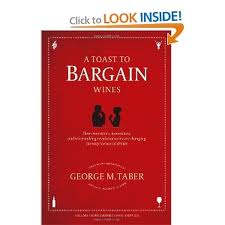 Glen Ellen, which happened to be my wedding wine in 1986, was one of the first wineries to list the grape variety name on the label (ours was the Chardonnay) and is credited, among a few other wines in the 80s, when diners stopped ordering a glass of white wine and began to ask for a glass of Chardonnay.

And a few interesting words about wine judging.:  Taber writes that a study by the Journal of Wine Economics showed that out of over 2400 wines entered in more than three wine judging contests, 47 percent received gold medals – but 84 percent of those never received another award in any other contest.  Several conclusions were drawn, but, of note for me as a wannabe judge: the contrast by the Lodi International Wine Awards – where judges are given more time to evaluate each wine and are not allowed to speak to others.

You should be able to find Black Box wines at Cost Plus World Market (on the Old Road in Stevenson Ranch for locals) that has done well with its own tally of 15 gold medals and some scores up to the high 80s from the Wine Spectator.  Personally, I like the box, grew up on the Franzia in my twenties, but if you have kids in the house, don’t bother with the box.  (And while I’m on the subject, lock your liquor cabinet and cellar.  I haven’t had a problem yet.)

In the use of descriptors, Taber quotes Coco Krumme of the Massachusetts Institute of Technology, in an interesting rule: “Expensive wines are described in terms indicating authenticity or exclusivity (versus accessibility), fullness of flavor (rather than lightness), and specificity (versus generality)…”

I mentioned the [yellow tail] brand earlier.  A lot of money has been made on inexpensive wines produced in bulk.  I’m happy about that as I want my industry to continue to flourish.  Taber spends quite a bit of time on our Aussie neighbors and their inexpensive results in winemaking.  In my humble opinion, inexpensive wines from many new world areas besides Australia like Chile, Argentina and Spain can be just as worthwhile.  Sometimes wine prices reflect more the price of real estate than it does good tasting wine, like Napa prices verses Paso Robles.

China has become the 6th largest wine producer – though most is not exported YET, give them time Taber basically says – and the 5th largest consumer.  I want a road trip.

The last 100 pages or so of the book is dedicated to a break down, per grape variety, of Taber’s top bargain wines.  His blind tasting system, and dedication to the task ( twice weekly blind tastings, overseen by his wife) produced lists that were not wholly unexpected…and helpful to a grocery list shopper as most can be found on the wine shelves in the local supermarket, with additional nods to “splurge” wines much in the same way Natalie MacLean recently listed hers in the last book I reviewed, Unquenchable, A Tipsy Quest for the World’s Best Bargain Wines.

His ending section, on specific wineries by area to try, was a nice education for the novice or aficionado, as everyone can always find something new to drink when they are open to learning. 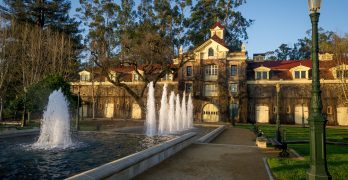