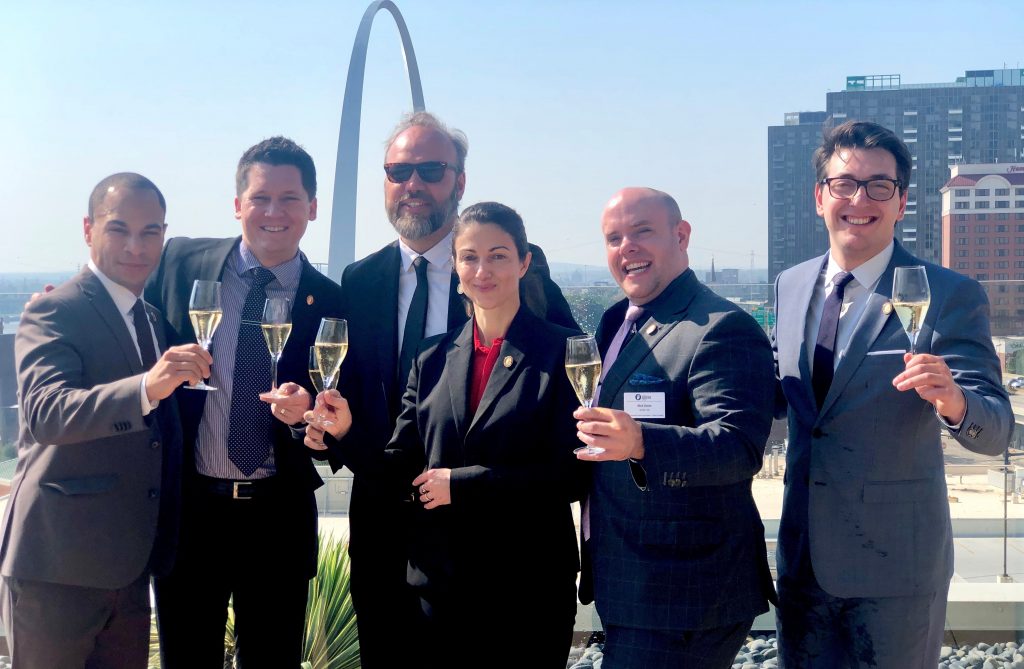 Recently 150 individuals from 22 states and Canada attempted the Master Sommelier Diploma Examination proctored by the Court of Master Sommeliers, Americas. The seven noted above, successfully displayed mastery and met the qualification to be awarded the title Master Sommelier. The results were announced at the Krug Reception on September 11th at the Four Seasons Resort in St. Louis, Missouri.

“The examinations are an opportunity for our candidates to shine as they demonstrate their mastery of our beverage service industry,” said Devon Broglie, MS, Chairman of the Court of Master Sommeliers, Americas. “It is inspiring to see their dedication to rigorous study and preparation on display during the examination days.”

Following the celebration of our new members, Broglie reflected on the challenges facing the organization and thanked the Examination Committee for its tireless work to provide a rigorous, exacting and fair examination consistent with the Court’s peerless Master Sommelier credential.

“We have made great strides to become a stronger organization over the past year,” Broglie said. “We have improved the security of our examinations, strengthened our ethical principles, and we continue our commitment to leading the industry with integrity as we celebrate new Master Sommeliers and mentor all those still striving to attain the goal.”

ABOUT THE COURT OF MASTER SOMMELIERS, AMERICAS

The Court of Master Sommeliers sets the global standard of excellence for beverage service within the hospitality industry with integrity, exemplary knowledge, and humility.

The Court was established in England in 1977 to encourage improved standards of beverage knowledge and service in hotels and restaurants. The first Master Sommelier Diploma Exam to be held in the United States was in 1987. The title Master Sommelier marks the highest recognition of wine and spirits knowledge, beverage service abilities, and professionalism in the hospitality trade. Education was then, and remains today, the Court’s charter.

WASHINGTON – The Wine Origins Alliance (WOA) recently praised the passage of a bipartisan congressional resolution, S. Res. 649, that recognizes the uniqueness and value of American Viticultural Areas (AVAs). The Senate resolution, introduced by Senators Roy Blunt (R-MO) and Jeff Merkley (D-OR), acknowledges the distinctiveness of American wine regions and the contributions they provide to the U.S. and global economy.

“Missouri has a rich history in winemaking dating back to German settlers in the mid-1800s,” said Blunt. “Today, the wine industry contributes more than $3.2 billion annually to the state’s economy. Missouri is also fortunate to have the very first federally-designated American Viticultural Area in the country, which is located in Augusta, Missouri. I am pleased that my colleagues joined Senator Merkley and me in supporting our nation’s wines, wineries, and wine-growing regions across the country.”

“Oregon wine country is one of the most beautiful and productive regions of our state,” said Merkley. “Our delicious pinots, Rieslings and more create jobs and fuel our tourist economy. I am happy to recognize the wine industry’s incredible contributions to Oregon and the United States, and will continue to be a strong ally and customer!”

The WOA is a unified global force in the winemaking industry dedicated to raising awareness about the importance of location to winemaking and protecting the integrity of wine region names worldwide. Its members include 24 winery and grape-growing organizations in nine countries spanning North America, Europe and Australia. In March, the Alliance released a consumer survey that found 94 percent of American wine drinkers support laws that would protect consumers from misleading wine labels. The group also released a short film featuring winemakers explaining how the complete environment of a wine region’s location makes their wines unique.

“Every wine region around the world produces wine that is impossible to duplicate anywhere else, and I want to thank Senators Blunt and Merkley for their leadership in introducing and securing the passage of this resolution to recognize that special places make unique wines,” said Harry Peterson-Nedry, representative for the Oregon Winegrowers Association and Willamette Valley Wineries Association.

“We appreciate the efforts of Senators Blunt and Merkley to pass this resolution,” added Dr. Peter Hofherr, Chairman of the Missouri Wine and Grape Board and Chairman and CEO of St. James Winery. “In doing so, the Senate has demonstrated its commitment to the U.S. wine industry and the quality regions that produce unique wines.”

The global wine market is currently worth an estimated $342.43 billion and expected to grow 5.1 percent by 2023. In the United States, the wine industry directly employs more than one million people and supports nearly 300,000 jobs. Additionally, U.S. wine regions host more than 43 million tourists each year, supporting 375,000 jobs and generating nearly $18 billion in tourism expenditures.

“The introduction of these resolutions demonstrates the increased attention paid by the U.S. Congress – and the American consumers they represent – to the value of wine regions and their great impact on a nation’s economy,” said Maxime Toubart, winegrower and co-president of the Comité Champagne. “We are proud to work with U.S. wine regions and others from Europe, Canada, and Australia, to ensure that our wine region names are protected for the benefit of consumers and not abused.”

For more information about the Alliance’s activities, visit origins.wine.