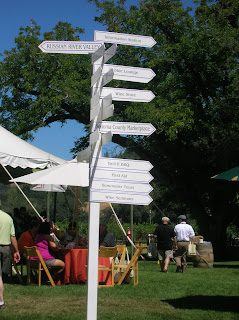 Del Dotto Vineyards offers two different caves to tour in Napa Valley: the Historic and the Estate. The Historic was one of the first built in Napa, hand dug in 1885, and believed to create wines “more voluptuous and opulent than wines aged in modern facilities. With up to 45 different flavors of highly rated wines it has been voted #1 wine tasting by world wine critics!”

That said I thought more people may have visited the Historic caves, I know I had seen some press on it, than the newer Estate caves. I wanted to see for myself why a cave tasting would be the best way to spend a day in Napa. Having had barrel tastings in the past I thought I was prepared. Not a chance.

My husband Eddie and I were greeted by Del Dotto’s conversant winemaker Gerard Zanzonico. While I was reluctant to leave the ornate tasting room, I was drawn into the caves by the flicker of the Venetian glass chandeliers and marble floors.

“We sell our wine by bottling it, as it’s sold, from the barrel our guests tasted it from,” began Zanzonico. “And being the only winemaker besides one guy in Italy using clay pots, we are unique in Napa in providing a tremendous encounter for the consumer.”

Zanzonico, a UC Davis grad, has experience spanning over 30 years. “I don’t make wines by committee; I do it all.”

“In one barrel I may try different yeast, in another, different oak, one from the east side of the vineyard, and another from the south, one barrel was made from 8 grape clusters while others may contain 22 to 26. All in all we have 54 different wines from 2006 alone. So here you get what you like from your own taste buds.”

At this point in the tasting I was writing blindly on my note pad, saturated with semicircular red wine stains. Zanzonico used a large glass wine thief (I told you in a previous column that this is like a turkey baster) to draw out the wine from the barrel and into our glasses. I tried my hand at it, fearing I would break the thin glass vessel, so once was enough.

I poured out so much wine I felt guilty, while Eddie kept the pace with Zanzonico, I had a column to write and had to maintain some objectivity.

We worked our way to the back of the caves and behind an ornate black rot iron gate to where the clay pots were stored. I was getting excited about trying something I hadn’t never tried as well as being drawn into my surroundings. In another time it would have been a monk tasting the wines; not a blond from Santa Clarita.

You really had to just hold your nose above the glass to smell the aroma, first taste: clay. Zanzonico encouraged us to swirl and try again: less clay. Third swirl: the beginning of an interesting wine.

I marked my favorites and fantasized about having a barrel, or clay pot, of my own one day. But only if Zanzonico is there.

It has been awhile since I attempted to taste more than the 54 wines Zanzonico poured the day before, but Eddie and I once again faced the challenge for Signal readers.

Sonoma Wine Country Weekend, held this past Labor Day, was anchored by a plethora of wine and food. Tented tasting areas were devoted to different Sonoma valleys: Alexander, Dry Creek, Russian and Sonoma.

I really wanted to take the Reidel “Sensory Evaluation” class but we missed it. We wanted to do the MacMurray Ranch tour and learn how actor Fred MacMurray made the ranch his home; too late. And of course I wanted to eat and drink everything too; simply impossible. Looking back I recall two different gazpachos: one with watermelon and the other cucumber. And my favorite appetizer of the day had to be from local restaurant, “the girl & the fig”: warm fig and walnut crisp.

But, during the heat of the day, somewhere between the tents for Alexander and Russian we simply just had to sit and recharge. We watched a few minutes of the Steel Chef Competitions before settling in for a hands-on lecture in the “Crush Pad”.

Members from the Sonoma Valley Vintners board showed us the de-steming and crushing process for the first phase of winemaking. Remarkable to us was how grape juice alone, without added yeast, became denser and more interesting in the process.

The “Bubble Lounge” that we noticed at the entrance we visited on our exit. I had dumped my Sangria snow cone into my glass, nibbled on a few elegantly crafted hor d’ourves and crash landed onto a waiting couch. It was downtime.

The stats: Over 4000 attendees attended the weekend events, which grossed a total of 1,570,705 to benefit charities. More than 120 wineries and 60 chefs offered their wines and foods for sampling in the 29th year of this event. Seminars, freshly harvested grape tastings, hands-on winemaking, and a top chef competition gave visitors a sampling of the diversity and quality of Sonoma County. The success of Sonoma Wine Country Weekend 2008 is far reaching and will be anticipated as a highlight again in 2009.

Every year I reflect back on the best wines I’ve enjoyed the past year, and … END_OF_DOCUMENT_TOKEN_TO_BE_REPLACED