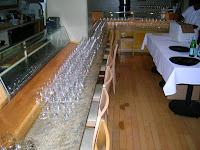 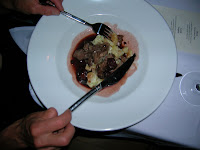 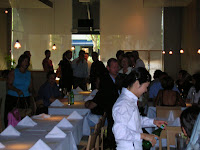 We are lucky in Santa Clarita to be blessed with many sushi bars offering all forms of spicy rolls to match with hot sake in the winter; cold sake in the summer.
But there is only one here that boasts a wine list with not only over a dozen Sakes, champagnes, dessert and port wines, but also the unexpected: over 70 bottles of red, and over 40 of white wines. Each shows the vintage date and an amazing 45 are available by the glass.
I would tell you that this is not a food review blog, it’s a wine review. But, a little segue if I may, the menu is incomparable. Some of my favorites are the minimum daily offerings of at least 4 different Toro (Hard-to-find at most sushi bars, this belly section of different tunas is the most buttery of all sushi to me), anything with a Miso reduction sauce and, they are known to have the best cuts of steak in town. Yes, it’s a sushi bar. Google it: Maru SUSHI, Towne Center Drive, Valencia.
So, back to the wine. Our server told us that the executive chef, Jason Park, offers a tasting of every new wine when added to the menu. I have ordered and enjoyed the following, listed in ascending order of price starting at $14 a bottle on the white, $36 on the reds, *’d were server recommendations the last time I was there, **are both. And keep in mind this is only a section of the list:
Reds:
2005 Ravenswood Zinfandel
2006 Estancia Pinot Noir
2005 Rodney Strong Pinot Noir
2005 David Bruce Pinot Noir
2003 Markham Merlot
2004 Twomey Merlot
2005 Wolf Blass Shiraz Gold Label
2004 Stag’s Leap Petite Syrah
2004 Spencer Roloson Tempranillo *
2003 Mount Veeder Cabernet **
2004 Groth Cabernet Sauvignon
2004 Cloud View Cabernet Sauvignon *
2002 Brown Estate Cabernet Sauvignon *
2000 Beringer Private Reserve Cabernet Sauvignon
2005 Caymus Cabernet
2002-2003 Silver Oaks Napa & Alexander Valley Cabernet
2004 Joseph Phelps La Mistral (our house wine, see previous post)
2003-2004 Opus One
Whites:
2004-2006 Chateau Saint Michelle Gewurztraminer, Semillion, Chardonnay and Riesling
2006 Chimney Rock Fume Blanc
2005 & 2006 Ferrari Carani Chardonnay and Fume Blanc
2005 Wold Blass Chardonnay
2005 Geyser Peak Chardonnay
2005 Stag’s leap Chardonnay
2004 Simi Winery Reserve Chardonnay
Sake, Champagne, Port and Miscellaneous:
Sho Chiku Bai 300 Ginjyo
Kikusui Junmai Ginjyo
Hakutsuru Plum Wine
Sho Chiku Bai Nigori (unfiltered)
Dom Perignon 1998
Taylor Fladgate
So there you have it. And you have to go to see how well it pairs with the Park’s nightly menu. You will never view sushi bars the same way after just one trip through Maru’s doors. I’ll flip you a Toro over it. (Their website links to my last article on them and the event the photos from above were taken: http://www.maruvalencia.com/press/0707-thesignal.pdf)