Discover  wines from pioneer regions born in the early 1900’s when vineyards started to stretch throughout California right before prohibition..  Explore other wine areas, which were simultaneously being protected by appellation systems, such as the French AOCs.


Indulge  in tasty pairings with artisan ‘historic’ cheeses from the old continent directly imported by Nicole’s Gourmet Food in South Pasadena..  unveil -among others- Brillat-Savarin cheese created in the 30’s and named after the famous 18th century Revolution supporter and French gastronome, Jean-Anthelme Brillat-Savarin..  Cheeses will be served with bread made in the traditional Parisian style by La Maison du Pain..

Spice-up  the evening with the outstanding and absolutely delightful palate of Grand Cru chocolates from Valrhona, founded in 1922 by a French chef pâtissier from the Rhône valley, in the small town of Tain L’Hermitage, a wine-growing district near Lyon..  Tempt your taste buds with chocolates from the best cocoa plantations around the world..  including Madagascar, Dominican Republic and Ecuador..

Meet up  with passionate wine & gourmet food experts who will guide and assist you throughout the soiree..

Listen  to The Dustbowl Revival..  “a Venice-based folk-blues orchestra that merges old school gypsy rhythms with bluegrass, gospel, jug-band, jump blues and the hot swing of the 1930’s to form a spicy roots cocktail”.

Enjoy  breath-taking night views on downtown’s historic core from the Los Angeles Athletic Club’s rooftop patio..  and experience a flashback in the early 19th century from their (newly renovated) luxury guest rooms atop the Club.. 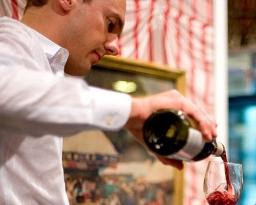 About the man behind LA Wine Tasting, Jean-Baptiste

Having a huge passion for Wines and Spirits, I have been working in this industry for more than 8 years now, both in France and in the U.S.

In 2000, I  worked for ChateauOnline.com in Paris.  I was there a wine consultant for premium clients, in Europe and overseas, helping them to build up a wine collection.

In 2001, I worked in marketing for Moet Hennessy Louis Vuitton (LVMH).  As a product manager for Hennessy Cognac, I contributed to the launch of Fine de Cognac on the European market.

End of 2001, and for two years, I was hired out by the Champagnes Piper and Charles Heidsieck (Remy-Cointreau Group) in Reims, France.  I was working as a Brand Manager for Charles Heidsieck and launched new products both for the European & U.S. markets.

Since October 2004, I have been hosting educational wine events in Los Angeles area.  I have been also representing a boutique wine distributor targeting high-end hotels & restaurants, wine bars, wine & gourmet stores in all South California.

The World of Wine is a great way to meet GREAT people and YOU are now part of it… CHEERS!!