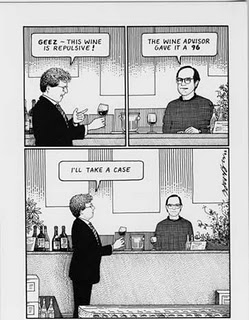 For years I have had comments thrown at me about the wines that I drink along with hearing the proverbial statement from people that, ” Two-Buck Chuck is fine for me.”  This statement is then followed by the comment, “…and  Two-Buck Chuck has won awards.”  So what is Charles Shaw doing to produce Two-Buck Chuck to such a quality that it wins awards over some very  good wines?  Are his wines that great?  The fact is, Charles Shaw has won two awards.  The first was in 2002 at the International Eastern Wine Competition with his 2002 Shiraz receiving the double gold medal over 2,300 other wines.  His second award was in 2007 with his 2005 California chardonnay which was judged Best Chardonnay from California at the Commercial Wine Competition of the 2007 California Exposition and State Fair.  Was the bottle that was judged really Two Buck Chuck?  Was there a problem with the judges used for this event as they are supposed to be certified and qualified for such events?  To judge wines a person must pass a test to prove they can identify several wines, their faults, etc., before they become a judge.  Judges in the California State Fair are people that are involved in the wine industry and are all considered wine pros of sorts.  Is Two Buck Chuck really not that bad and go toe to toe with some fairly reputable small wineries?

Two Buck Chuck is produced and bottled by Bronco Wine Corp.  Bronco buys up the cheap excess grapes from vineyards where the supply is exceeding demand and get these grapes at a rock bottom price.  The fact that they are buying cheap grapes from multiple vineyards is where bottle to bottle consistency comes into play.  We all know that terrior, harvesting and processing of grapes from the vineyard to the winery has a tremendous effect on a wine.  The grapes purchased by Bronco exclude high quality Napa Valley grapes as the cost per ton would be too high to allow the $2.00 retail price per bottle to be maintained.  Most of the grapes for Two Buck Chuck are purchased from the California Central Coast where there is excess and the cost is extremely cheap.  So what this means is the wine you are drinking comes from many different vineyards.  I have always said the big problem with producing wines at this volume and price is consistency and quality and have read that Charles Shaw has produced and shipped more than 2 million cases of wines to Trader Joe’s in the first four months of this year.  The same number of cases sold in the nine months it was on the market in 2002, according to the Wine Market Report.

So how did Two Buck Chuck come through as a winner over wines that were being meticulously crafted in very small quantities by vintners?

1. Did the judging system fail?  If the number of wines being judged was extensive perhaps their palates were shut down and they were unable to evaluate the wines correctly.  Did the judges choose the Two Buck Chuck as a compromise by the judges based on ambiguities in decisions over a few of the better showing wines?

2. Maybe the judges chosen for this wine varietal (Shiraz and Chardonnay) either did not like that style or were inexperienced with them.

3. Maybe the sample Identification numbers were changed by accident.  This happened to me with a beer that I had entered in a competition.  I sent the same beer to two events.  One event said that the beer was contaminated and was judged poorly for clarity, aroma, etc.  The same beer at the other event took second place with high accolades.  Since these beers were from the same batch and judged on the same weekend it amounted to two possibilities:  Either the judges were looking at two different beers or the judging was flawed.

To acquire a better perspective on Two Buck Chuck, I purchased a bottle of 2009 Shiraz and 2009 Chardonnay.  I also enlisted the help of Vic Herstein from All Corked Up to help my wife and I to evaluate this wine.  I poured the Shiraz for Vic Herstein from a brown bag and told him to evaluate this wine honestly.  My wife, Vic and I put our glasses up to our noses and just looked at each other.  There was no fruit profile but a very funny nose that I really cannot put into words.  Next, we all tasted the wine and were met by a tart tangy sensation in my mouth.  It had no mouth feel and was thin almost like a Beaujolais Nouveau.  The flavor disappeared immediately (thank goodness).  None of us were capable of providing a clear description on the flavors of this wine.  Common fruit flavors for syrah/shiraz wines such as blueberry, blackberry, plum, peppery, etc. were nonexistent.  The wine had absolutely no structure or balance in our opinions. After our tasting, my wife wanted me to dump it out.  She didn’t want to even think of giving it to anyone, even if they weren’t wine connoisseurs.

So what happened at the competition where these $2.00 wines put on such a great showing?  This is not a question I could begin to answer as  I wouldn’t even recommend this wine as a prospective choice to drink for effect, it would make you sick before reaching a state of intoxication.  I guess there will be a few people that will find Two Buck Chuck a great deal for the person looking for a extremely cheap table wine.  If you find this wine enjoyable and are drinking for effect you can’t beat the $2 a bottle price.  For $24 you can buy a case and have a party, however, please don’t send me an invitation.  The fact that it is only sold at Trader Joes shows that it is also not a wine that will be a competitor on the shelf of your local wine bar. My feeling is that the awards given to Two Buck Chuck undermines the reality of good quality wines and good judging.  I say this based on my own tasting, though a different vintage.  Once I get up the nerve, I will open the Chardonnay which was deemed the Best Chardonnay from California.  My curiosity was not the only on the question of these awards.  I read articles where wine judges and connoisseurs have tried to recreate the test and Two Buck Chuck does not place at the top, however, it does place towards the bottom.  So please, do not throw the comment at me that it is a great wine based on two awards which in my opinion are questionable. You know the saying, “Beauty is in the eye of the beholder”,  wine is in the taste of the beholder.  As the other saying goes, “Two Buck Chuck is just not my cup of tea”.

Editor’s Note – me! – After Rusty wrote the above article he got this additional commentary from his pal Mike Kling, who agreed to be quoted verbatim:

I tried your wine tonight.  The first thing that I thought was that it was a little bit “tangy”.  Not being a “wine snob” I am not really familiar with Shiraz’ so I could not really compare it to anything that I was familiar with as I tend to like a Merlot and then a Cab.  So I didn’t know what to think about that sensation.  Then the aftertaste kicked in and I think it tasted rather metallic. What I had at home tonight was a Yellow Tail (Australian) Merlot.  I thought I would compare them.  I took the half a glass of the Shiraz and poured a glass of the Merlot. I would alternate sips as I was finishing my dinner.  Probably not very scientific or up to true wine tasting standards but I would always have a bite of potatoes before a sip of the wine so that anything left on my palate would be similar and not skew my thinking.  Then I tried mixing up the glasses to see if I could tell a difference and the metallic aftertaste would give it away every time.

Not quite conventional I know but you couldn’t convince me to go buy that stuff either before or after reading your article.  I have tried some inexpensive wines that I sell at my store, we have a exclusive label similar to $2 Buck that we sell for $1.99 most of the time (Bay Bridge) and a South American called Aconga that is rather inexpensive.  The Aconga comes in a Malbec/Cab blend and in a Chard/?? mixture.  It has been a while but neither of them was that bad.  Let me know if you want to do a tasting comparing the $2 Buck, and the other two and I will bring home a bottle of each red and you can judge them and let me know what to tell customers that ask.  Right now I just say, it is popular and sells well, without being committed either way and it is the truth.