A few weeks ago I got into a discussion with a vodka purist.  One of the ideas put forth was that most people tend to use vodka as a tasteless “neutral” spirit, with the least harsh being the most popular, as it lends itself to being deftly hidden away in popular cocktails.

But, in keeping with my “tasting wine is spiritual” philosophy, I thought it wise to dissect a few vodkas – without mixers – to detect some unique nuances And, of course, we had a few surprises. 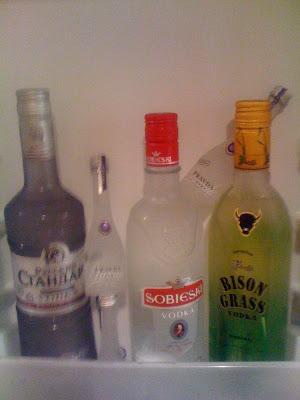 I invited Facebook friends Carrie DuShey, Dana Chernault, Jackie Clavon and Cathy Martin to join me.  I found some tasting sheets to use and did a little research.  For descriptors to help us I found these on the Internet, and repeated them many times that night: “Smooth, rough, sweet, floral, bitter, classic, burns, spice, fire, herbs, almond, grassy, vegetal, sharp, hot peppers, citrus, mellow, bitter, berry and perfume.”

The vodkas  (All hovered around the $20 range)

Note about the finish: In WSET training if the flavor lasted on your tongue after swallowing for a count of 1-3 it was short, 4-6 med-length, 7-10 long…or something like that.  We used the same method here.

It was our first vodka of the evening, and not destined to be our favorite, although Jackie liked the blue-jeweled mini bottles.


Sobieski Distilled from rye, from Poland.  Neutral aroma, sweet with a burn only on the  tip of our tongues, short – but welcoming – finish.  This was to be first runner – up in the unflavored category.

Russian Standard Platinum Distilled from Grain, from Russia – it’s the label above in Russian.

Note: There were two to choose from at Bev Mo, the Silver or the Platinum.  I asked and was told that this was the better of the two, and it was on sale for a little less than $20.  I also chose this one as on an Internet search it was said the most popular in Russia…but the Internet also said Russian vodkas come with pop-tops and are meant to be consumed in one evening.  Kind of like how we drink wine, but, I was wondering…is it drunk that fast due to its wonderful taste or…for inebriation purposes only?

Nice light citrus aroma, smooth, with some heat on the mid-palate.    Jackie was the first to say, “I could drink this straight.”  We all agreed, and many of us came back to it later to sip.

Now to the flavored ones:

Zubrowka Bison Grass-flavored I don’t know if you can tell in the photo above, but yes, there was a blade of grass in our vodka, and, the vodka itself was the color of old water “antique” vodka.  I printed out several pages of notes on the “bison grass, a rare aromatic herb grass that grows exclusively in the last remaining primeval forest in Europe.” But, all I could think was that a Bison poo-ed in this field, and on the grass, and most likely on the one blade that flavored what was now in my glass.

The aroma was a shock of sugar-sweet, like other flavored vodkas.  It was rough, high acid, and berry-flavored.  Left us wondering what else, besides the grass, was added perhaps, to mask what I expected to taste…?  Long finish.  Recipes for this vodka online called for Apple juice…well you can just imagine what I thought of mixing Bison Grass with a another yellowy-tinged drink.  No thanks.

Bacon Vodka The appearance, globs of white cellulite-looking fat particles clotting the top and floating around the bacon vodka, not pretty.  The cooked bacon itself had been “whitened” by the vodka and wasn’t exactly appealing either.  Carrie used my ONLY martini shaker to mix it up over ice for our tastes.

An aroma of cured beef and salt, thick on the palate and a short finish…that I couldn’t finish.  It met our Bison Grass vodka in the pour-out dump bucket and I never looked back.

Bacon Vodka Bloody Mary Well, I’ll say this for my multi-degreed collegiate friend, she can sure make a drink.  The recipe and picture are below.

The appearance was greatly improved – and hid the fat globs from my wimpy view – with beef jerky garnish and ice cubes.  The aroma had more spice, black pepper and became more “vegetal” with the mixings.  The palate was hot now due to the same above-mentioned mixers as well.

With this last tasting, vastly improved upon with the recipe, we could now appreciate the need for cocktails over pure vodka.  I think it’s up to personal preference as well.

To pair, the ladies being most helpful as they knew I still didn’t have a complete kitchen to work with, I had purchased Russian “Zakuski”- little bites to pair with vodka.  I looked over a list and chose some pickled items: stuffed grape leaves, olives, pickled garlic, pickled asparagus, skewered onions and an eggplant spread.

Carrie brought the bacon-infused vodka that we saved for last, and the makings of Bloody Marys (recipe below).  Dana made

goatcheese and jalapeño jam on crackers, cheese-stuffed dates and Scandinavian raspberry almondbars.  Jackie made bacon wrapped dates with pineapple.  And I forgot to ask Cathy to bring anything as she was a last-minute guest…but she brought her WSET education!
Next tasting: Rums!   I’m bringing Jack Sparrow… 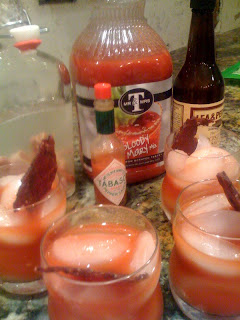 Bacon Vodka and Bloody Marys
Put 5 pieces of cooked bacon in a 750 ml. bottle of vodka. Seal the bottle andkeep in in the refrigerator for 3 weeks. The resulting product will look kindof scary but it will taste delicious.
Shake vodka in a martini shaker with Bloody Mary mix (juice), Worcestershire, hot sauce and garnish with beef jerky.
When I make them at home I also add somehorseradish and celery salt. Another nice addition is a salted rim made with acombination of kosher salt and Bacon Salt.

VERONA, ITALY (PRWEB) - The CourseJuly 2022 marked an exciting foray into the UK … END_OF_DOCUMENT_TOKEN_TO_BE_REPLACED