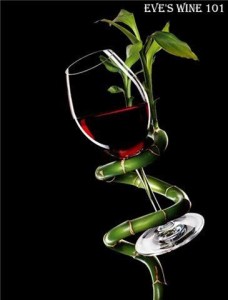 (My notes are in italics below.  And, full disclosure – Eddie made this, but at least that allowed me the time to make some notes on the wine!)

FOR THE SAUCE
2/3 cup beef stock (used one cup)
2/3 Cabernet Sauvignon (used one cup)
3 tablespoons seedless blackberry preserves
Kosher salt & freshly cracked black pepper, to taste
A handful of fresh blackberries, for garnish (Does anyone garnish?  I was lazy = didn’t.)

Pat the steaks dry with a paper towel and season generously with salt and pepper. In a heavy, ovenproof skillet, heat the olive oil over medium-high heat until almost smoking. Sear the steaks, on 1 side only, for 2 minutes until the meat begins to caramelize. Resist the urge to touch or poke at the meat so that caramelization actually has the chance to occur. You want your steaks to have that perfect contrast in texture, seared and crusty on one side, tender and juicy on the other. Without flipping the steak, transfer the pan to the oven and roast for a bout 7 minutes for medium rare (or when a meat thermometer registers 135 degrees.)

Meanwhile, in a small saucepan, combine beef stock, Cabernet Sauvignon and blackberry preserves. Bring to the boil, reduce to a simmer and allow the mixture to reduce by half. The sauce is ready when it becomes slightly thick and syrupy and can coat the back of a spoon. Season with pepper, but taste before adding any salt because canned stocks and broths tend to be a bit salty. It’s always better to err on the side of caution. (This whole reduction  process took us 90 minutes, so add some more time in for this.)

When the steaks are done, remove from the oven and allow them to rest loosely tented under apiece of aluminum foil for about 5 minutes. To serve, drizzle the blackberry Cabernet sauce over the steaks, scatter a few black berries on the plate and unleash the carnivore within.

Ed made a “sweated vegetables” (cooked a long time on a low heat) medley of celery, onion and mushrooms to go with David’s steak.  Very nice.  We also sautéed mushrooms, onion and butter as a steak topping.

The pairing for David’s steak and Blackberry Cab sauce:

(Disclosure: A gift from Ron and Kym Cappi.  THANKS!)

MOORESTOWN, N.J./PRNewswire/ -- Wines 'Til Sold Out (WTSO) has a new kind of … END_OF_DOCUMENT_TOKEN_TO_BE_REPLACED