Los Angeles, CA – Sideways The Play, adapted by Rex Pickett from his own novel, is the story of two friends – Miles and Jack – and their journey across the Santa Ynez wine country, on one last blowout trip before Jack gets married. Miles and Jack must face their uncertain futures…just as soon as they figure out how to survive their chaotic present. 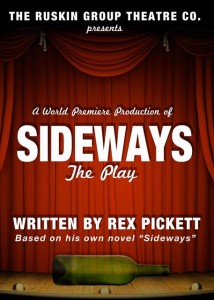 REX PICKETT (Playwright) is the author of the novel Sideways and its sequel Vertical.  He has written and directed two feature films, California Without End, From Hollywood to Deadwood, and numerous screenplays.  In 2000 the film of his short script, My Mother Dreams the Satan’s Disciples in New York (directed by Barbara Schock), won the Academy Award for Best Live Action Short.  In 2004, the Alexander Payne-directed movie Sideways, based upon Rex’s novel, was released to worldwide critical acclaim, winning over 350 awards from various critics and awards organizations, including 5 New York Film Critics Circle awards, 5 L.A. Film Critics awards, 6 IFP Independent Spirit Awards, 2 Golden Globes, and the Oscar for Best Adapted Screenplay.  It is enshrined with a plaque on the wall of the Writers Guild of America Theater as one of the 101 Greatest Screenplays in the history of motion pictures.  Rex is currently writing a pilot for HBO and a script for Barbara Schock called On Tour with Max.

“I hate the dispiriting nature of development – i.e. screenwriting, but the stage is a fresh vehicle for audiences to experience the original story.  This team at the Ruskin was so passionate about theater, so certain that ‘Sideways’ based on my novel — not the film — would lend itself to the stage, that this time the development process became truly rewarding.”

AMELIA MULKEY (Director) is a director in theater and film. She cut her teeth in filmmaking by working as a producing director’s assistant for several television shows including Saving Grace, Army Wives, and Lie to Me. Since then, Amelia has produced and directed several short films including Unicorn Girl, which screened at several festivals last year. She graduated Cum Laude with a degree in Art History and Theatre from Loyola Marymount University. Amelia has worked on several stage productions at San Francisco’s New Conservatory Theatre, and has been tapped numerous times to direct CAFÉ PLAYS, the popular Ruskin Group Theatre event which sells out monthly. Other stage credits include When the Speak of Rita, Bash,The Laramie Project, Denty Crisis, and Lend Me a Tenor. Most recently, she directed a critically acclaimed production of Arthur Miller’s A Memory of Two Monday’s at Ruskin Group Theatre, which received a Backstage Critic’s Pick, an Ovation Recommendation, and 6 nominations including “Best Director” from The LA Stage Alliance.  Amelia is currently in development for a new series, about the San Francisco burlesque scene.

RUSKIN GROUP THEATRE has been making an impact on the Los Angeles theatre scene with an eclectic mix of thought provoking plays, garnering numerous “recommendations” from local critics.  Ruskin’s Fostering Imagination program sponsors foster kids in theatre & film classes that produce several original shows each year.  The CAFÉ PLAYS, created by RGT are produced monthly and are the culmination of writers, actors, and directors who meet at 9am, where they are given a theme.  They then write, produce, and perform a show by 7pm the same day.  When celebrating their 8th anniversary, RGT supporters Ed Asner, Dylan McDermott, Chris Mulkey, Olivia d’Abo, and other industry celebrities joined to produce the Best of Café Plays (both shows sold out within hours).  Anthony Hopkins and Anthony Franciosa were some of the first teachers at Ruskin School of Theatre.

JOHN RUSKIN (Artistic Director) helmed the critically acclaimed production of Strange Snow at RGT.  His years of experience include studies at the Yale School of Drama, British American Drama Academy in Oxford, England, and the University of Colorado in Boulder.  In New York, Ruskin joined the acting faculty of the Neighborhood Playhouse at the request of Sanford Meisner (who he then apprenticed with) before moving to Los Angeles where he founded his own school of acting and a professional theatre company.  The company provides outreach programs to people in need with their “Healing Through the Arts” project.

MICHAEL MYERS (Producer/Managing Director) has produced more than 65 projects since 2002.  He recently directed the world premiere of Digging Up Dad and the critically acclaimed production of Faithful at RGT.  Mike is a co-creator of the Ruskin Group Theatre’s well attended CAFÉ PLAYS, the monthly offering of one-acts that are done in 10 ½ hours from conception to staging.  He serves as vice-chair of the Santa Monica Arts Commission.

MIKE REILLY (Producer/Production Manager) has a long history as a director/producer at the Ruskin.  Directorial credits include The Lonesome West, Cowboy Mouth, Lobby Hero, and Brilliant Traces.  Mike has over 20 years of experience as a producer, director and teacher, and he has been an integral part of the Ruskin Group Theatre’s producing team.  Recently, he co-produced the Ruskin hit shows Faithful, and the world premiere of Jesse Boy.

JASON MATTHEWS (Producer) is currently the inaugural Writer-in-Residence at the Ruskin Group Theatre. His debut full-length comedy Four Night Stand was produced in Spring 2010. Jason’s work has been produced more than 50 times nationwide, in playwriting festivals and readings, and exclusive one-act productions. An aspiring wine enthusiast, Jason met Rex at a Pinot Tasting, where they first hatched the crazy idea of adapting Sideways for the stage.

JONATHAN BRAY (Jack) has appeared with Frank Langella in The Father and with Nathan Lane and Sarah Jessica Parker for The Roundabout Theatre’s benefit performance of Once In A Lifetime.   Most recently he appeared as The Narrator in Craig Wright’s The Pavilion and as Valene in The Lonesome West.  TV credits include episodes of ABC’s Man Up and Showtime’s new comedy House of Lies. Jonathan stars in The Walkaround, a mockumentary about auto shows, set to premiere at the Indie Spirit Film Festival in 2012.

JULIA McILVAINE (Maya) last appeared at the Ruskin in A Memory of Two Mondays, and was seen as Duenna in their production of Cyrano. In New York, Julia appeared in Henry VIII at the Public Theatre’s NYSF, Pride’s Crossing at Lincoln Center, and Marsha Norman’s Trudy Blue at the Manhattan Theatre Company. For CBS, ABC and Fox, she has appeared in four television pilots, and movies for Hallmark Hall of Fame. Julia is a graduate of the USC School of Theatre.

CLOE KROMWELL (Terra) was seen as Roxanne in Cyrano and in the role of Teresa in John Patrick Shanley’s Italian American Reconciliation, both produced at the Ruskin.  Her film credits include the shorts Goodbye, Nice to Meet You, Dadlands, and the feature film Moustache.

HAMILTON MATTHEWS (Brad-The Boar Hunter) was last seen at the Ruskin in Arthur Miller’s A Memory of Two Mondays. He is an accomplished singer and studied vocal performance at the Westminster Choir College in Princeton, NJ.  He recently finished work in a production of Dark Side of the Moon with the Next Stage Theatre.

C.J. STRAWN (Designer) was set and costume designer at La Mama Theatre in NYC for playwrights and directors such as Sam Shepherd and Andrei Serban.  She toured with the company to work at The Royal Court Theatre in London, the Mickery Theatre in Amsterdam, and the Spolletto Festival in Italy.  C.J. has been a Production Designer in the film and television industry on numerous projects, and has worked for New Line Cinema: (4) Nightmare on Elm Street films, The Hidden, and many “Indi” films.