The L.A. Loves Alex’s Lemonade Culinary Cookout, hosted by Chef Suzanne Goin, partner Caroline Styne (Lucques, A.O.C., Tavern) along with Chef David Lentz (The Hungry Cat), returns to Culver Studios on Saturday, September 29, 2012 from 12 – 4pm for its third highly anticipated season. Neil Patrick Harris and his partner, E! News Correspondent David Burtka, will return as Honorary Co-Hosts  and Jimmy Kimmel, an outstanding champion of this fundraiser and member of Alex’s Lemonade Stand Foundation’s National Advisory Board, will reprise his role as Master of Ceremonies with Viveca Paulin Ferrell acting as celebrity auctioneer. The Presenting Sponsor for the culinary cookout will be Volvo Cars of North America. Goin, Styne and Lentz have again enlisted the support and generosity of their culinary friends around the nation who will donate their time and services to raise funds and awareness for Alex’s Lemonade Stand Foundation (ALSF) in their quest to find better treatments and cures for all kids with cancer. 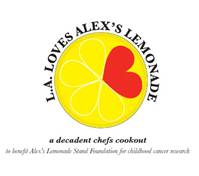 In addition to General Admission tickets of $175, L.A. Loves Alex’s Lemonade will offer a $1,200 premier ticket level including early admission, reserved seating and an exclusive Meet-And-Greet dinner the night before the event prepared by Nancy Silverton and special friends, where guests can meet the participating chefs. Added for this year,  special seating at reserved tables of 10 will be sold for $5,000 each, which includes entry and personal table service.

Children are welcome to accompany their parents to the Sunday festivities and those under 10 receive complimentary admission. Tickets for all levels are available for purchase online at www.lucques.com, www.thehungrycat.com or AlexsLemonade.org/campaign/la-loves-alexs-lemonade. All proceeds will benefit ALSF.

“What we’ve accomplished in two years is so gratifying. It’s a tremendous amount of work to produce, but the rewards of knowing that the money we’ve raised truly helps research for cures makes it worthwhile,” said Caroline Styne. “There are so many people that come together to make this happen; they work tirelessly to come up with ideas to make this year’s celebration better than the one before. And we do this because Alex Scott’s legacy inspires us to rise to the challenge.”

“The growth of the L.A. Loves Alex’s Lemonade culinary event since inception in 2010 has been nothing short of miraculous to watch,” said Jay Scott, Alex’s Dad and Co-Executive Director of Alex’s Lemonade Stand Foundation. “While the event may have followed in the footsteps of The Great Chefs Event, it has come into its own creating a relaxed atmosphere on the west coast where the culinary cookout continues to make a difference for kids battling cancer.”

For information on how to become a sponsor, contact David Brownstein at Alex’s Lemonade Stand Foundation, (610) 649-3034 or David@AlexsLemonade.org.  To view a video montage of the event from past years, visit http://www.inventunique.com/sizzles/alexslemonade/montage_cut2.mov

***All chefs have graciously donated their time, food and talent to the cause for this event***

Every year I reflect back on the best wines I’ve enjoyed the past year, and … END_OF_DOCUMENT_TOKEN_TO_BE_REPLACED