Throughout my travels, I have stayed in some luxurious as well as unique hotels. By far one of my most interesting haunts is Helsinki’s Glo Hotel Art. Set in a 1900s Art Nouveau castle, and in the center of the city’s Design District, the interior of this colossal structure is no less imposing. The hotel’s modern art collection is a popular must see with both Finns and tourists alike.The hotel’s lobby has long been a popular meeting place for “Helsinkilainen,” Helsinki natives, to  relax with friends and enjoy a drink in the Glo Lounge Bar. 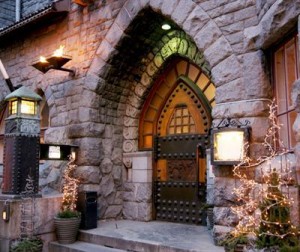 Today I am joined by friend and fellow sommelier, Ella Korhonen, in the castle’s cellar restaurant, Glo Art Kitchen. The hundred-year old establishment offers some of the finest Nordic cuisine in Helsinki.

“Well Gregory,” Ella paused to survey the appetizers that graced our table.” I hope you are ready to eat and drink like a Finn.”

Our table had been set with some deletable edibles. Our assortment of appetizers  included fried vendace, a local fish eaten whole. Vendace is considered a delicacy by the Finns. Kaalikaaryleet, cabbage rolls, palvikinkku, smoked ham, viilii, a yogut-like fermented milk product,  legipajuusto, cheese served with cloudberry jam, ruisleipa, a dark and fiber-rich rye bread which is a staple part of the Finnish diet, and of course, my particular favorite, mushrooms. Finns love mushrooms and various species grow in abundance in Finnish forests.

“Gregory,” Ella called for my attention. “I was curious, you often visit Helsinki, what was it that initially brought you to Finland?”

“Two things, actually,” I paused in fond reflection. “The first was curiosity.”

“During Soviet times, American companies were not allowed to film in the USSR, and Finland often doubled as the backdrop.”

“Kippis,” Ella toasted. “Hanoi Rocks is also a perennial favorite of mine.”

Our first selection was a most interesting liqueur called Lakkalikoori. The two major Finnish  distillers, Chymos and Lapponia are part of the Swedish-based V & S Group. What exactly is Lakkalikoori? “Lakka” means cloudberry in Finnish. These vitamin rich berries can only be found growing wildly in the moors and marshlands of the northern Scandanavia. Lakkalikoori, or “Lakka,” is produced by soaking the berries in alcohol from two to six months until sweetened. The final alcohol content of our richly golden spirit is 17%. The orange raspberry-like berries produce a spirit that is delicate and bitter-sweet in flavor. On an even more interesting note, though Lakka is typically served neat, it has become fashionable to add it to coffee.

“It is more my custom to enjoy Lakka with my coffee,” Ella flashed me a coquettish smile.

“Jump start the morning,” I said with a wink. “A caffeine cocktail on steroids.”

Our next selection was another popular Finnish spirit known as Salmiakkikoskenkorva, or Salmari, as it is affectionately known, is a pre-mixed type of vodka cocktail. With it’s introduction in the 1990s to Finland’s drinking culture, Salmari caused a minor revolution. Before the 1990s, Finland had a very thin and stratified cocktail culture. A single episode of “The Simpsons,” changed all that. While at Moe’s Tavern, Homer Simpson created a cocktail he christened, the “Flaming Moe.” The drink consisted of cough medicine amongst other ingredients. Finnish drinking establishments began serving a similar concoction of ammonium chloride (salmiakki in Finnish) and based candy. It became a trendy drink that was favored by the Finnish youth of the day and became known as “Teenager’s vodka.” 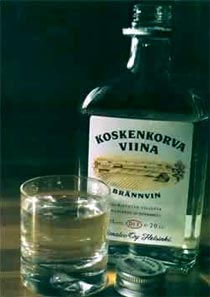 “Knowing your love for licorice,” Ella’s eyes crinkled softly. “I thought you’d find this Salmari produced by Koskenkorva, interesting to your palate, and at 40% alcohol, strong enough.”

“I like the black licorice notes,” I paused to to lick my lips. “The cough medicine flavor seems to increase salivation.”

“The same mixture used in Salmiakki Koskenkorva is also used in local cough medicines,” Ella’s expression took on a much graver look. “There is an urban myth that a teenager once suffered a heart attack from Salmari abuse.”

“Not surprising,” my lips pursed into a smile. “The medicinal qualities can be over bearing.”

Our last spirit is simply called Viina. In Finnish, this translates as “hard liquor”, or “booze.” It is a clear alcohol distilled from barley. The original recipe called for a 200-step continuous distillation producing a near-unflavored  spirit of 38% alcohol.

Since our Koskenkorva Viina is intended for foreign markets, there is the standard 40% alcohol. Of course, Ella selected the 60% alcohol Viina. Kossu, as it is affectionately known, is at it’s best when served chilled. Koskenkorva also produces a vanilla flavored spirit distilled from rye. It is known as Koskenkorva Viina Ruis.

“I know the distillers are attempting to arrive at an almost neutral spirit,” I paused to savor my drink. “I do pick up just the slightest hint of flavor.”

“So do I,” Ella broke out into laughter.”Strong and even stronger!”

“Kippis,” I joined in her merriment.

“Gregory,” she called for my attention. “I have a gift for you.”

“I know you like our rock group, HIM,” she paused to add to my anticipation. “Tonight, we are going to the concert.”

MOORESTOWN, N.J./PRNewswire/ -- Wines 'Til Sold Out (WTSO) has a new kind of … END_OF_DOCUMENT_TOKEN_TO_BE_REPLACED