A thin cover of snow veiled the west Ukraine city of Lviv. Now that winter slowly gave way to spring, I once again found myself on the road.

A scant forty miles from the Polish border, this part of Ukraine has a long history of being conquered by other nations. Dating back to antiquity, various Slavic tribes ruled these lands for centuries. Since the Middle Ages, the realm was known as the Kingdom of Galicia. In 1772 the dominion was annexed by the House of Habsburg, where it remained under the control of the Austro-Hungarian Empire until 1918. After WWl, Galicia was absorbed by the Republic of Poland, and remained under Polish control until the end of WWll.

Since the beginning of the 20th century, Lviv was best known to the outside world as the home of the famous Baczewski vodka family. The celebrated spirits of this heralded domain found favor with the kings and emperors of Europe, and with the fashionable society of the day. 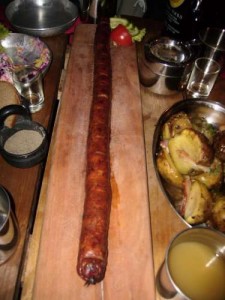 The first distillery dates back to 1782 and was founded in the Lviv suburb of Wybranowka. Even today, the distillery is recognized  as the oldest Polish plant of its kind.

Tonight I am meeting my friend and fellow sommelier, Darina Sienkiewicz. Darina was born in Lviv and knows its history. She is half-Polish, half-Ukrainian, and all about vodka.

The evening’s festivities began with a tasting at the immensely popular Kryjivka Cafe. This renown theme restaurant, whose name means “bunker” in Ukrainian, is guarded by costumed sentries from the period of 1943-1949.  It was during this era that the Ukrainian Insurgent Army (UPA) waged a guerilla war against Nazis, Poles, and the Soviet Union. 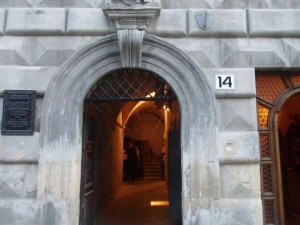 With a sound knock on the cafe’s wooden door, I was greeted through a peep hole, by a uniformed sentry.

“Heroyam slava, Glory to its heroes,” I bellowed.

This was my ticket to be allowed entry and passage beyond the guard. The inside decor  of Kryjivka is an intriguing and genial bunker. Adorned with grenades, rifles, and other antique weaponry, the cafe is a testament to the harsh realities of war.

“The cafe is dedicated to the memory of our heroes,” Darina greeted me tenderly with a kiss on each cheek. “We have a saying that to not visit Kryjivka, is not to have visited Lviv.”

We made our way to our table which had been filled with n assortment of zakuska, Ukrainian finger foods to compliment our vodka. The theme was along peasant lines, consisting of an assortment of goat and sheep cheeses, sausages, a cold mutton platter, and of course, black bread.

What is our first selection? I queried.

“You were among the first to take Perlova vodka to the States so I thought this the appropriate vodka for the evening,” Darina’s tone was one of enthusiasm. 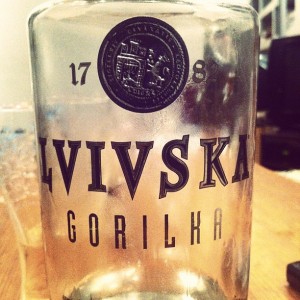 Perlova, aptly named Lvivska in Ukraine, is acclaimed by many as the country’s best vodka. Point in fact, the company is the most titled of all Ukrainian distilleries. Perlova, translates as “pearl barley,” and the company boasts the distilling of only the finest barley/wheat mash. These uniquely crafted spirits are an attempt to closely reproduce the great recipes of a bygone era … In honor of the Baczewski family, and the original opening of the distillery, Lvivska 1782 was recently released to an eagerly awaiting public. This vodka is filled with an interesting array of herbal aromas and citrus. It is dryish in character with medium body, and is 40% alcohol. Lvivska 1782 is an exceptional buy at $30.

“I concur. This is a very smooth vodka. It is soft on the palate, and flavorful,” I paused to collect my thoughts. “I also like the clean finish and the subtle heat that warms the cockles of my heart.”

Lvivska 1782 is marketed under the traditional name, “horilka,” the Ukrainian word for vodka. Recently Poland filed with the European Union to trademark the name “vodka” for only those spirits distilled from potatoes. Needless to say, this has ruffled a few feathers in vodka community. Nemiroff, one of Ukraine’s major vodka producers, considers their vodkas as liqueurs, and are now being marketed as such. In Poland, Gvori, one of the country’s most popular labels, has already begun to brand itself as a “gorzalka,” the traditional Polish name for vodka.

Our next selection, Golden Lion, is also from Perlova. Prince Danilo Galician made the name of his son, Lev, eternal with the founding of the city of Lviv. A great golden lion marked the city’s coat of arms and was posted at each of Lviv’s gates. This elegant vodka was created  in honor of this glorious city. Another excellent sipping vodka that has been crafted in the traditional manner to quell the thirst of the most discerning palates. There is a delicate aroma of mint to this medium bodied vodka. It is mild and refreshing. The finish is pleasant with a soft tingling sensation. It is 40% alcohol and a rare find at only $25.

“I think Golden Lion is completely representative of the traditional vodkas that have come out of this area,” Darina proudly boasted. “I believe that the light fragrance will also be to the liking of many women.”

“Once again I am impressed by the soft elegance of the vodkas of the region,” I paused in reflection. “I am also impressed by the melding of the Polish and Ukrainian styles that have produced a vodka that is solely unique to this region, and transcends time.”

Our final selection far supersedes the others in terms of extravagance. Polubotka has produced a luxury horilka that contains flakes of gold within the bottle. Zoloto Polubotka is slightly reminiscent Switzerland’s Goldschlager Schnapps. So why the gold flakes? No one really knows. There is a myth that imbibers believe the flakes make small cuts as they are ingested, resulting in a quicker absorption of alcohol. This is absurd. The particles are  gold leaf, and there are no edges to cause any cuts whatsoever, to one’s esophagus. Another tale is that the gold flakes are actually cinnamon, which in part, create the subtle aromas of various spices. Then there is the legend that the flakes are the remains from the lost Cossack treasure of Pavlo Polubotok. The flakes are 23-carat gold and almost insensible while tasting. In short, the Cossacks believed it was invaluable as a colloid solution and regenerated vitality. Zoloto Polubotka is indicative of a time when luxury and opulence knew no bounds. It is 40% alcohol with a price tag of $45. 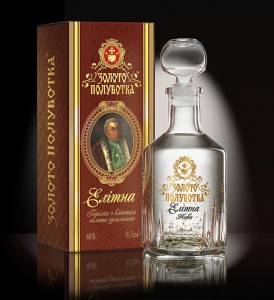 “I actually like the subdued spiciness if Zoloto Polubotka,” Darina’s eyes crinkled softly. “I am still not quite sure as to the point of the gold flakes.”

We both erupted into laughter.

“Grisha, are you aware of the Western Ukraine custom of drinking a minimum of three shots per bottle?” Darina queried.

The festivities went on throughout the night. Another Ukrainian custom states that once a bottle of horilka is opened, it must be finished in entirety. There were also endless dishes of zakuska as we quaffed down our three bottles of horilka.

“Do you think we will make the morning train to Bukovina?” Darina’s tone and manner clearly indicated that she was tipsy.

The one time Duchy of Bukovina I reflected fondly. “But that my friends is another story …”