My brother Mike and his wife Diane were visiting for the holidays – staying with my mom in West Los Angeles – and we offered to drive to them for a dinner out.  My editor Michael Perlis knows some great places so I checked with him and this one, with a $10 corkage fee and more than one meat n’potatoes option, fit the bill.

I made reservations for an early dinner at 5:30 and we ended up arriving at 5pm.  The door was open though they didn’t open until 5:30, so we thought about entering, and the manager saw us, came out, and invited us in to sit at the bar for a bit.  We went for it.

We started with ordering a nice French rose and a Malbec by the glass.  (The wine was served in carafes alongside the stemware.  The bartender poured only a couple of ounces.  I like this approach as I have room to swirl.  I understand from servers that they like it as it reduces discussion with patrons about whether or not they are being poured a full glass.)

We started with a few “bites” while at the bar: Indonesian Crispy Brussels Sprouts, Seared Pineapple Salad and Tuna Tartare.  The Brussels Sprouts were a bit spicy for me but Mike loved them and the fact that there was an entire selection of Crispy Brussels Sprouts – seven in all!  Diane enjoyed the Seared Pineapple while I liked the rum glaze on them.  And, finally, the Tuna Tartare was slightly different from other versions as it was stacked above a fresh seaweed salad in a ginger-orange dressing. (Happy Hour is Monday through Friday from 5-7 p.m., and the food at the bar is all priced at $6 and selected wine by the glass is $4.) 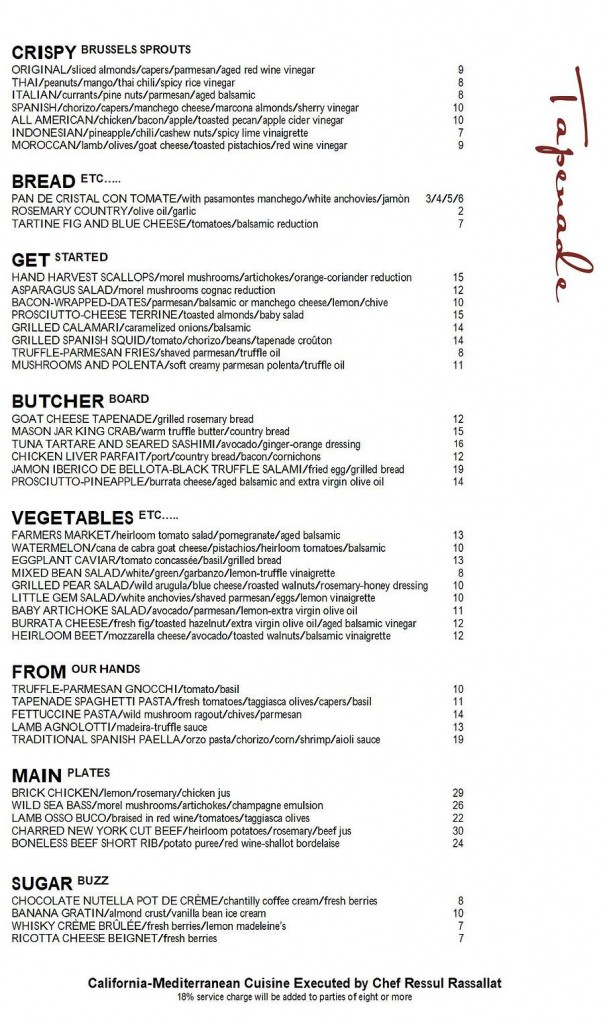 Soon it was 5:30 and we moved to our table to dig in for more.  It was here that our Brazilian waitress (sorry, I should have gotten her name!) came to our aid.  She went through the menu – all eight sections – explaining that we could order from each and share a main dish.  We took her up on her idea.  And, even better, as she herself liked everything on the menu we tried…as much as we humanly could.

I was glad that I had brought a 2007 Lucas and Lewellan Petit Verdot as later I had to order an Earthquake Zinfandel – because we were still eating after the first bottle was done!

All in all we had a remarkable time.  I’ve never had so many tapas at one seating before.  I’d like to think it was because there were four of us ordering, but the reality is we were enjoying everything – the menu, the company, the service and the wine – and it added up to a memorable experience.  One I would like to duplicate soon.

Founded by Chef Ressul Rassallat, the menu reflects the chefs extensive travels and culinary experience in the south of France, Paris, London, Asia, Spain, and the United States. Ressul showcases his lifelong commitment to preparing simple yet innovative California cuisine and features one of the most creative wine lists in the city.