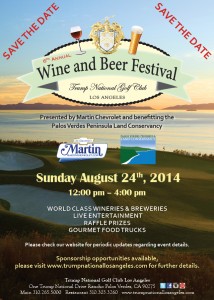 Angelika Carry of WineBuzzLA.com proclaims, “It was the best event I’ve attended this year. It was an excellent way to spend a sunny Sunday in a beautiful setting, drinking fabulous wines with nice music and great friends.” PubClub.com touts, “Trump National Wine & Beer Festival has become one of the hottest social events in the social- heavy South Bay…”

“The Palos Verdes Peninsula Land Conservancy appreciates being the beneficiary of the Wine and Beer Festival. Let’s raise our glasses to open space as we work together toward our commitment to the land,” said Andrea Vona, Executive Director of PVPLC. Trump National hopes the growing tradition of the Wine & Beer Festival event will continue to raise awareness for The Palos Verdes Peninsula Land Conservancy.

Tickets for the event go on sale June 24th and are available online or in the Pro Shop at Trump National. General Admission Tickets are $60 for adults, 21 years of age or older, and include unlimited wine and beer sampling. VIP Tickets and preferred parking passes are also available. For tickets and sponsorship opportunities please visit our website at www.trumpnationallosangeles.com and click “Wine & Beer Festival” link at top left.

The mission of The Palos Verdes Peninsula Land Conservancy (PVPLC) is to “preserve land and restore habitat for the enjoyment and education of all.” The Conservancy preserves undeveloped land as open space for historical, educational, ecological, recreational and scenic purposes. Since its founding in 1988, the Conservancy has successfully preserved 1,600 acres of open space on the Palos Verdes Peninsula. The Conservancy’s vision is the creation and management of large blocks of natural open space where visitors may enjoy peaceful solitude, where children and adults can learn about the natural environment, and where native plants and animals can thrive.

Alella, a small wine district in the north eastern part of Spain centers around … END_OF_DOCUMENT_TOKEN_TO_BE_REPLACED