People are often very willing and very good at volunteering information explaining their actions. But those explanations, particularly when it comes to the kinds of spontaneous opinions and decisions that arise out of the unconscious, aren’t necessarily correct.  Consumer responses during market surveys can often be misleading.

A study by the Cheskin company involved two competing brands of inexpensive brandy, Christian Brothers and E & J. The client, Christian Brothers, wanted to know why, after years of being the dominant brand in the category, it was losing market share to E & J. Their brandy wasn’t more expensive. It wasn’t harder to find in the store. And it was not being out-advertised. So, why was it losing ground?

Cheskin set up a blind taste test with 200 brandy drinkers. The two brandies came out roughly the same. Cheskin then decided to go a few steps further. He told people which glass belonged to Christian Brothers and which to E & J. This time Christian Brothers’ 3 numbers were up. Clearly, people had more positive associations with the name Christian Brothers than with E & J. But if Christian Brothers had a stronger brand, why was it losing market share? Two hundred people were contacted, this time with the actual bottles of each brand being in the background. There was a distinct statistical preference for E & J. The problem was not the product or the branding. It was the package.

ChristianBrothers looked like a bottle of wine: it had a long, slender spout and a simple off-white label. E & J, by contrast, had a far more ornate bottle: more squat, like a decanter, with smoked glass, foil wrapping around the spout, and a dark, richly textured label. To prove their point, Cheskin did one more test. Two hundred people were served Christian Brothers Brandy out of an E & J bottle, and E & J Brandy out of a Christian Brothers bottle. Christian Brothers won hands-down, by the biggest margin of all. Now they had the right taste, the right brand, and the right bottle. The company redesigned its bottle to be a lot more like E & J’s, and solved the problem.

Clever packaging cannot be a substitute for a bad-tasting product. The taste of the product is important. But the point to note is that when we put something in our mouth and in that blink of an eye decide whether it tastes good or not, we are reacting not only to the evidence from our taste buds and salivary glands but also to the evidence of our eyes and memories and imaginations. Marketers cannot afford to overlook this point and pursue a simplified, uni dimensional approach  .http://www.vedpuriswar.org/book_review/BLINK.pdf 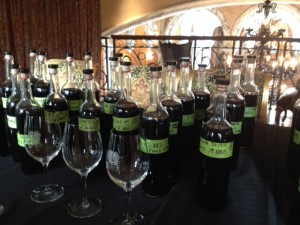 So how do you think you would measure up on a taste test?  Having a cold for the past week a few people wondered why I gave up wine.  When I was a kid home with a cold my mother gave me an extra large Hershey Bar to make me happy.  It didn’t.  I couldn’t taste it.  I could enjoy seeing the bar, tearing through the outer paper wrapper and slim inner foil, having it melt on my tongue…and then?  Nothing.  Packaging can only go far.

The same thing can happen with wine.  Whether, red, white or pink, I can’t taste it when I’m congested.  And, if I were to try, I wouldn’t enjoy it and I would remember that negative outcome.

The next thing about tasting wine, when I don’t have a cold, is the process.  You might catch me holding the base of my wine glass on my table swirling longer than you think is necessary to open up the flavors of a just-opened bottle  – while you’re on your first sip.  I’ll smell it next, a little at the first swirl maybe, but most likely at the last swirl more.  I’m looking to see what I can detect, and what is changing, as I wait.  When I’m satisfied, and you’re likely to be half done with your glass, I will sip…but not yet drink.

I will hold the sip in my mouth, move the wine around my tongue and finally, swallow.  I will repeat this whole thing again and again, and be completely conscious of what I’m doing.  I often will feel like I’m having a different wine if I delay finishing it – aerating changes it that much for me.  It’s not a habit that works on its own doing.  It’s from years of tasting blind.  Of not letting the bottle’s back label, handy winery tasting notes, or you, tell me what I will find there.

I remember labels for wines I like and don’t like, but I’ve also learned enough to know that each vintage year is different, as are the changing winemakers, so I will try the same wines at a different times.  If you swear by something I may try it…but you, as the “packaging”, is something I will only consider briefly.

So, as far as the Brandy test above, I find it truly interesting as I did the entire Blink: The power of thinking with out thinking by Malcolm Gladwell.  Even me telling you how I drink wine now makes your experience subjective.  Can you drink alone?  Spend at least 10 seconds thinking about the wine you are sniffing or tasting?  Not use it just to wash down a meal?  Then your own your way to making your own experience objective.

By the way, take note that they only had two Brandys to compare in the quote I used above, multiply that by the thousands of wines we have.  That makes thousands of different answers.  One thing I will tell you, and why I don’t do many bottle ratings, is what you find in your glass will be different from what I find in mine.  And neither of us is right in speaking for anyone else.

Alella, a small wine district in the north eastern part of Spain centers around … END_OF_DOCUMENT_TOKEN_TO_BE_REPLACED