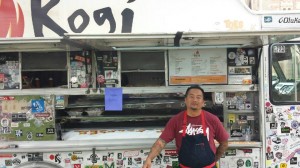 Alex’s Lemonade Stand Foundation carries on the legacy of Alexandra Scott, who passed away in 2004 at the far too young age of 8, having spent most of her life not only battling her own illness but raising money to fight childhood cancer. Millions of dollars have been raised by this organization.

In Los Angeles, L.A. Loves Alex’s Lemonade is an annual event dedicated to raising money for ALSF. The fundraiser brings together top chefs, not only from Los Angeles but from across the country, as well as great wines and spirits, along with entertainment. This year, UCLA played host on a picture perfect (finally cooler) Sunday afternoon.

Here are the chefs and libations. Note that when the chef is listed, that chef was actually there, not just a restaurant representative. Pretty much a “who’s who” of great chefs. And Roy Choi even brought the food truck!

The food and drinks were phenomenal. For the first time ever, I have to resort to a 100-point system to sort things out. Here are my scores:

All the mixologists: 100 pts

This event was about the contributions to a great cause, and everybody deserves equal praise and recognition.

That being said, I did have three tacos from Chef Choi’s truck. And Michael Voltaggio’s ice cream sandwiches helped to cool off the day as things heated up slightly.

And the wines — so many to choose from and I couldn’t try nearly enough of them [mainly because I was stuffing my face with the food as lines were short and those beautiful dishes were just begging to be eaten] but I do recall especially enjoying the Brown Estate Zinfandel, a red Rhone blend from Mighty Nimble [Paso Robles], another Rhone blend from Archium in Santa Barbara County, and a Syrah from Baker Lane Vineyards in Sonoma County. A real treat was connecting with Tracey Skupney of Napa Valley based Lang & Reed, a producer of outstanding Cabernet Franc.

There were plenty of celebrities in attendance. I was told there were sightings of Sean Hayes, Mark Feuerstein, Kirsten Vangsness, Nolan Gould and Jimmy Kimmel, among others. My personal favorite was when we just happened to be sitting next to Aarti Sequeira, former winner of The Next Food Network Star, and her family – had a nice chat with them.