What a lovely way to spend an afternoon: Driving through the hilly Las Virgenes Canyon until it becomes Malibu Canyon, passing by the grand green lawn of Pepperdine University to go to a beautiful new wine tasting bar across the street from the Pacific Ocean to mingle with a dozen other wine writers and social networkers. 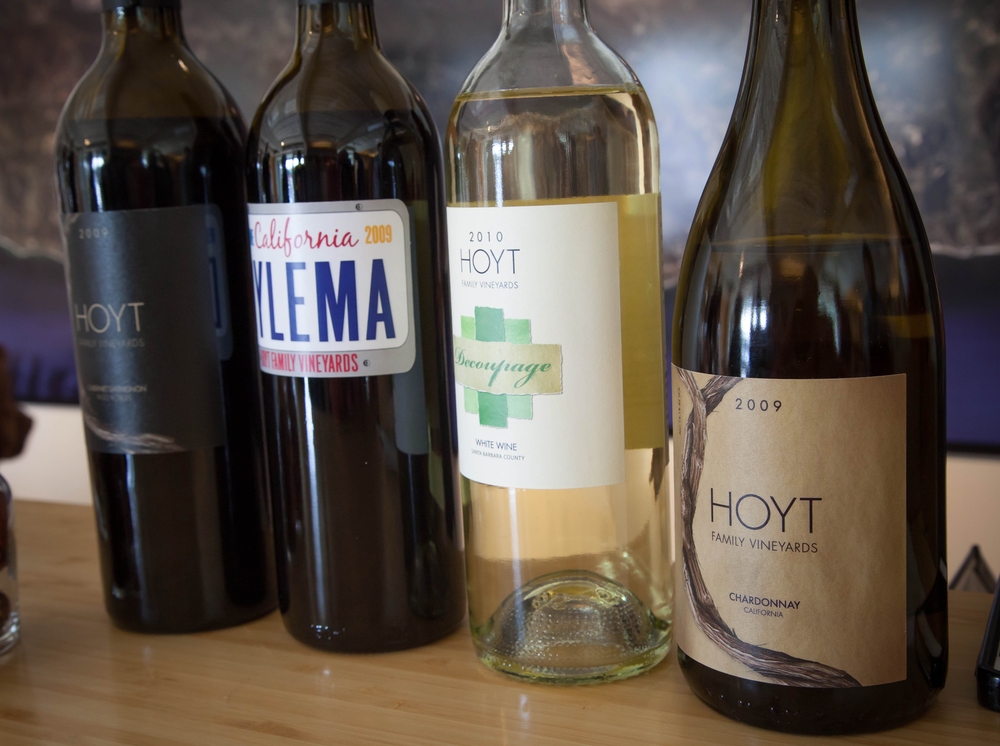 I’d made a slight error in judgment of the drive, and woefully arrived too late to hear owner Jim Palmer talk about his new venture* but what I lacked in timing I made up for by edging my way past my pals to the front of the bar to meet him and the other two wine makers/owners in attendance, Shawn Halahmy of Shai Cellars and Carol Hoyt of Hoyt Family Vineyards.

“…It’s all been a learning experience,” began Jim Palmer. “Every day you are a student learning something new. And being in California with over 9000 wine labels, and many UC Davis viticulture graduates, you are accepted for your passion.”

Carol Hoyt, a resident of Malibu with grapes sourced from Malibu and Paso Robles, added, “We support, and are fans, of one another.”

Shawn Halahmy, a businessman turned winemaker from the San Fernando Valley, with grapes grown in Santa Ynez, brought in two of his outstanding reds…that even though I had before I happily tasted again.

Shawn said, “Coming from a business background I was pleased to be treated so warmly into the wine biz industry.”

Starting with a Pinot Grigio named “Ramato” that Jim had made in the Italian “orange wine” style by leaving the skins on for a bit to create a blush color to the wine, I found it very crispy, lean and interesting, His Rose of Sangiovese greeted me with a burst of strawberries followed by butter and melon. The ‘10 Syrah had a beautiful garnet color followed by wonderful perfumy aromas of raspberry and mushroom and a balanced taste of both fruit and tannin lending to a long finish.

Using 50% new and used oak the Chardonnay had a sweeter nose than I expected and a nice crisp flavor. The white blend, of Pinot Grigio, Viognier and Chardonnay, which Carol called, “a party in your mouth”, had a full mouthfeel with tropical fruits and a hint of honey. From there I moved onto the reds. The first that I had, and later chose to buy for only $19, was the “Dylema” blend named after the Hoyts’ two children Dylan and Emma. Equal parts of Malbec, Cabernet Sauvignon and Petite Sirah gave way to a robust nose of mint, eucalyptus, forest floor, rich fruit and cigar. The taste was dry and tannic but overlaid with dark, rich fruits. Next I tried the ’09 Tempranillo and got a whiff of leather and dark fruits followed by a lighter-than-expected taste of cherry. The final Hoyt wine I tried, a ’09 Cabernet Sauvignon, delivered balanced black pepper and dark fruits and a taste of blackberry/blueberry jam on toast. Carol called that one, “Velveteen rabbit in my mouth.”

Starting with Shawn’s ’09 Adome red blend of Syrah and Cabernet Sauvignon I loved the aromas of black fruit, plum, black cherry and black pepper followed by nice deep fruit flavors nuanced by a smoky finish. The ‘09 Grenache had a great nose of red fruit, plums again and some mushroom; the taste was of smoothly developed fruit.

Just Janʼs jams (The whole tasting lineup was awesome after the wine!)

Gotta Have Smore (One word, “adorable”!)

Franklinʼs Teleme Cheese (My dairy-eating friends were uber-happy with the cheese and crackers from Rustic Bakery.)

From our Host, Miz en Place

Jim Palmer, owner of Malibu Vineyards, opened Malibu Beach Wines in September with a grand opening celebration on September 15th. He began the process 3 years ago and opened the first tasting room in the city of Malibu.

Jim planted his Decker Canyon vineyard, in western Malibu, in 1997 and takes a great deal of pride in working his 4 acre vineyard himself. It was a dream of Jim’s to open a tasting room in Malibu to feature the wines of Malibu and other boutique producers who don’t have a place to sell their wines. Most vineyards here do not have a place to pour their wine or sell to the public so we are giving them that opportunity.

He has a passion for small boutique producers and for many of the wines of Malibu. There are about 50 vineyards in the Santa Monica Mountains and about 20 to 30 are producing wine. Some of these vineyards are as small as a half acre. “There are a lot of small producers making 20 to 30 cases a year of great wine and they have few outlets to sell them.” says Palmer. His aim is to carry as many of the local wine producers as possible. He also is bringing in wines from smaller less known wineries throughout California, with a few from outside the state as well as France. Jim likes to bring in wines from producers he has a relationship with. Each of the winemakers has a unique story to tell that is reflected in the wines they produce.

Our company culture is to give the Malibu community an opportunity to experience the fruits of labor done by their own beloved locals. Our goal is to turn this into a business mecca for all the Malibu locals in the wine industry.

Some local Malibu wines and winemakers that have been garnishing awards include:

Malibu Beach Wines is a specialty wine tasting room and retail store located on Pacific Coast Highway in the center of Malibu California. We offer a community of local vintners creating hand-crafted, artisanal wines. We have the largest selection of limited production and ultra-premium wines from the Coast and Canyons of Malibu. 22775 Pacific Coast Highway Malibu, CA (Editor’s note: While many of the wineries mentioned still exist, sadly the Malbu tasting room has shuttered.)

A few weeks ago I received an email from Naushad Huda, the “Voice of Modern Wine … END_OF_DOCUMENT_TOKEN_TO_BE_REPLACED