Lots of wines, eight in all, to taste through this week. We are starting with the ports, though we would normally recommend finishing with a port. There is nothing at all wrong with starting a meal with a little taste of something sweet, and revisiting the same wines after your meal as well, give it a try. (A note on the Ports: they arrived the day before Halloween and came with suggested candy pairings.)

From Portugal we will be traveling to “The Promised Land” so to speak with wines from South Australia, starting with an unoaked Chardonnay and finishing up with a Shiraz.

Warre’s Otima 10 Year Old Tawny Port with DOTS: A unique bottling in clear glass and a slightly smaller size, I was interested in trying this tawny out. The color had a clear red center and brown edge, almost indicative of an aged Rose. On the nose we got aromas of chocolate covered cherries, liquor-filled chocolate, and Luxardo liqueur or a Luxardo cherry in a Manhattan. On the mouth there were more caramel and vanilla notes, as well as that same dark cherry, plums and a bit of sherry-reminiscent. 90 Eve pts. Suggested Pairing – A bright nose full of fresh nuts alongside a delicate palate of dried fruit make Otima 10 Year Old Tawny Port (SRP $26) the perfect complement to the mixed fruit flavors of DOTS.

Dow’s 2011 Late Bottled Vintage Port with KIT KAT®: The color of a fine Cabernet Sauvignon and very opaque. The aromas ranged from dry, dusty earth to dark cherry, dark chocolate, mushroom…with a lower alcohol and sweetness feeling compared to the tawny. When we tasted this one we got a very richly layered feeling, with good tannin structure, lots off depth, heat, big fruit, and a little smoke/cigarette ash on a very lengthy finish, 91 Eve pts. Suggested Pairing – Dow’s trademark drier style comes through, making this wine the perfect pairing with the candy’s crispy wafer and smooth milk chocolate. Unlike other Port houses, Dow’s only produces Late Bottled Vintage Port from the best of years.

Cockburn’s Special Reserve with Butterfinger®‎: A dark garnet in color, the special reserve had dense notes of red to black cherry, black plums and a dusty quality. Then came a mouth-coating viscosity on the taste with balanced flavors of fig, red cherry ad brown sugar. 90 Eve pts. Suggested Pairing – A luscious style of Port, bursting with bright red cherry fruit, and Cockburn’s signature mellow cask-finished tones enhancing its smoothness, make for a devilishly delicious pairing as the creamy milk chocolate base gives way to a peanut buttery palate. 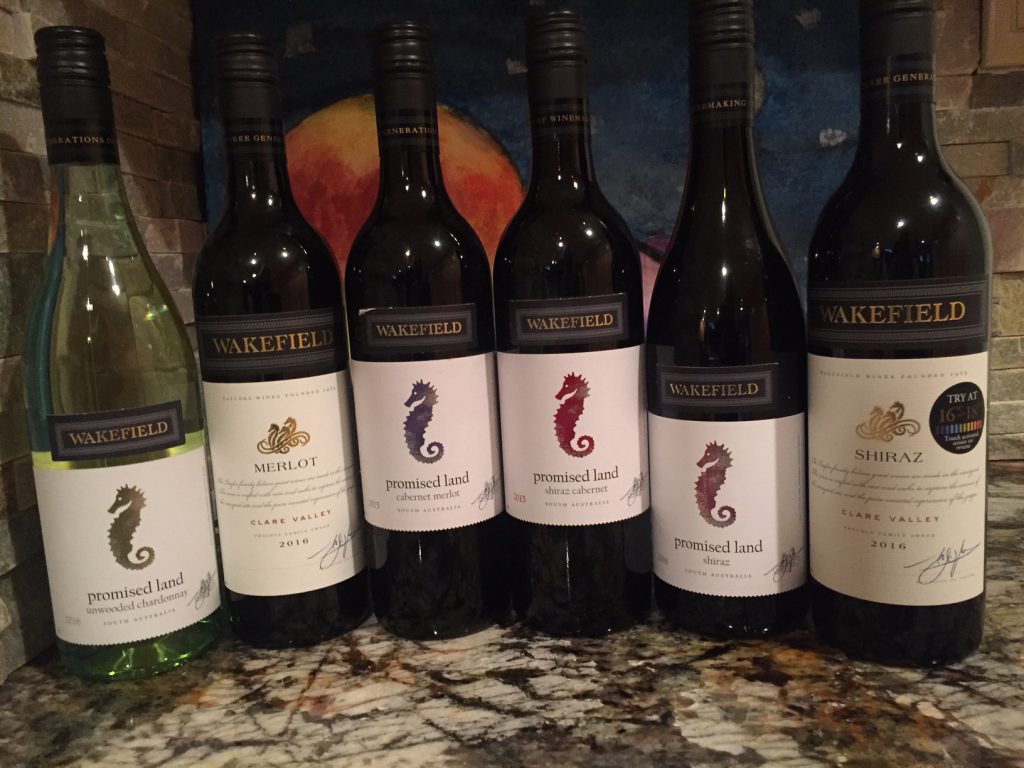 2016 Wakefield Merlot, Clare Valley Bold crushed blackberry, stewed plums, both dark and milk chocolate as well as mint and cinnamon rose up in the aromas. On the mouth there was blue to black fruit, very dry and tannic, and some welcoming spice held in for a medium to long finish. 89 Eve pts. From Tech Sheet – Bouquet: …raspberry, cherry and violets with enticing vanilla bean, spice and cinnamon from quality oak maturation. Palate: …ripe, dark fruit alongside rich fruit cake characters…flavours of vanilla, mocha and subtle spice…

2015 Promised Land Cabernet Merlot Crushed boysenberry, blueberry, jam, chocolate candy, tobacco and ash on the nose followed by the same fruit but less jammy and drier, also some blackberry and black currant, tannins help the flavors to linger. 88 Eve pts. From Tech Sheet – Bouquet: …plum, red berries and liquorice along with a hint of spice, cedar and vanilla… Palate: …ripe plum, red berries along with subtle liquorice and chocolate…

2015 Promised Land Shiraz Cabernet Aromas of pungent black fruit, cigarette, wet rock, very dark chocolate/cocoa and a hint of…paprika. On the mouth it was a bit tight due to its young age so we let it sit a bit and came back to revisit. Then we got nuances of blackberry, white pepper, green peppercorn, some smoke on the finish and firm tannins. 88 Eve pts. From Tech Sheet –Bouquet: aromas…plum, cassis and licorice. Palate: …red berries, plum, cassis, chocolate and spice…

2016 Promised Land Shiraz Blackberry, blueberry, boysenberry, dusty, milk chocolate, cream, vanilla bean all on the nose; while on the mouth I got that same black fruit but with lots of spice, tobacco, tannins and a medium finish. 89 Eve pts. From Tech Sheet –Bouquet: …red currant, plum and a touch of spice. Palate: …berry fruits, fine gentle tannins and a soft silky finish.

2016 Wakefield Shiraz, Clare Valley Hints of blueberry, blackberry, jam on toast and only a bit of pepper all on the nose while the mouth held notes of that same blue to black fruit, not a lot of spice or pepper, but good tannins and a tingling quality. 87 Eve pts. From Tech Sheet –Bouquet: …plum, blackcurrant and dark cherry fruits along with a bouquet of subtle mocha and a touch of oak derived spice. Palate: …plum and blackberry…Mocha coffee and subtle spice…