What a fun book! In the book Dragonvine by Steve Laine we begin by going to Napa, China and San Francisco with three stories – some taking place in the past and some in present day – which I knew would intertwine; and intertwine over wine they did. 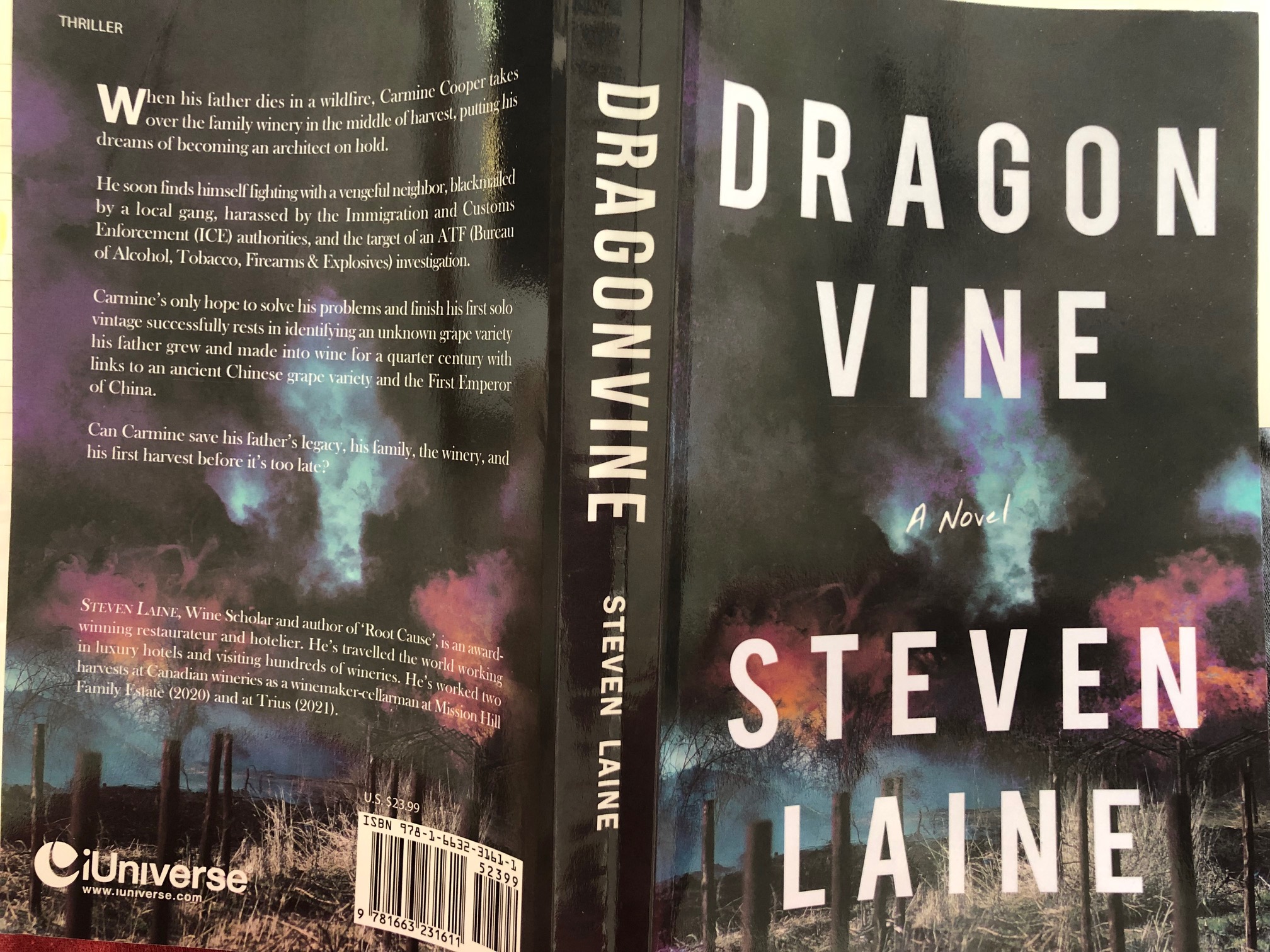 From the opening, an exciting fire scene in Napa Valley that was ripped from headlines we all had to live through, to ancient China and a murder scene, then to San Francisco for a female drug “gang” leader that lives by the words from Sun Tzu’s Art of War. The first time the author Steven Laine mentions the word Dragon I was paying even closer attention. The reason for the title was yet to be revealed.

As each story develops, along with the main characters, it’s a page-turner. Soon a dispute over vineyard property in Napa ensues. ATF and I.C.E officials also join the story. With the shady female gang leader now considering making and selling forged wine.

(Readers will now enjoy learning about fake wine, even if this book is fiction I found it immensely interesting. In some way I could see the appeal of working to try to create something just as good as a cult or rare wine. Along with the thrill of getting caught…or not.)

My only regretful note: one of our main characters doesn’t have a spot of wine until about 150 pages in, and he overindulges. I prefer my wine-themed books to intertwine some good wine tasting experiences in with the drama, or comedy.

Even with that note, Laine kept me on the edge of my seat for nearly 400 pages – the story ends on page 397. And not wanting to give away too much I will leave you with this: Sometimes when I drink an exceptional glass of wine I have to say to myself, “There’s a lot going on in this glass”, and that’s how I felt about reading Dragonvine.

Here is the synopsis for his new book Dragonvine:

When his father dies in a wildfire, Carmine Cooper takes over the family winery in the middle of harvest, putting his dreams of becoming an architect on hold. He soon finds himself fighting with a vengeful neighbor, blackmailed by a local gang, harassed by the Immigration and Customs Enforcement (ICE) authorities, and the target of an ATF (Bureau of Alcohol, Tobacco, Firearms & Explosives) investigation.

Carmine’s only hope to solve his problems and finish his first solo vintage successfully rests in identifying an unknown grape variety his father grew and made into wine for a quarter century with links to an ancient Chinese grape variety and the First Emperor of China.

Can Carmine save his father’s legacy, his family, the winery, and his first harvest before it’s too late?

Recommended for wine enthusiasts, Steven Laine has paired his extensive experience in the wine industry with his passion for writing to create a captivating wine thriller. https://bookpublicityservices.com/wine-book-dragonvine/