We got up early, Terry, CJ, Scott (two of our sons) and I.  We piled into Terry’s minivan and drove out to what has been variously described as Saugus, Acton or Agua Dulce.  Most of us know it as Le Chene.
buy strattera online https://medstaff.englewoodhealth.org/wp-content/languages/new/withoutprescription/strattera.html no prescription 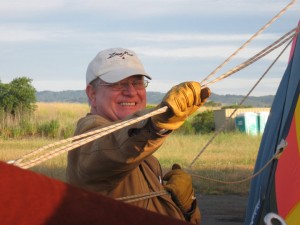 We got to a 5-acre vineyard near the home of Le Chene’s owner, Juan Alonso, at about 7:30 am.  Now, rather than plying us with foie gras or garlicky snails, we got hot coffee and Krispy Kreme donuts, along with a blade that had a circular handle that slipped over our finger.

Juan gave us (and about thirty of his closest friends) a ten minute tutorial on how to harvest grapes and set us to work.  I wasn’t that much into wine then so I can’t tell you what varietal we picked, just that they had seeds so they were less desirable as table grapes.

We failed to set any records for amount of grapes picked in three hours (unless you count fewest harvested).  But we completed our job and headed to Juan’s house.  There, he lived up to his justly deserved reputation as a great chef.  We had a terrific brunch with some delightful wine.  The meal must have been the highlight of the day because when I asked CJ if he remembered our being field hands, he replied, “Well, I recall Juan giving us something wrapped in bacon.  It was great!”

After our meal, we watched Juan and his consulting enologist feed the grapes into a crusher and then into fermenting barrels.  It was my introduction into the wonders and mysteries of wine.

Fast forward a dozen years.  I recently visited with Juan and his bride, Claudia.  He treated me to a delightful sampling of several of his home-grown wines, along with some tasty morsels tapas-style of his appetizers.

All of Juan’s wines are named after family members, or himself.  Such as his Don Juan Red.  Now, I don’t know if this is an example of gratuitous self-promotion or Juan just poking fun at himself. 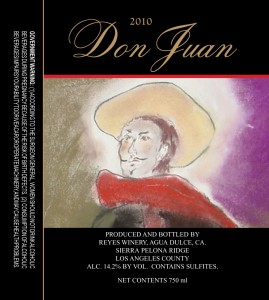 First up was the 2009 Adrian Tannat, a varietal I have little experience with.  A beautiful deep red, with a bouquet of warm raspberry jam.

A pleasant shift was to the 2007 Claudia Grenache.  Typically lighter and more refreshing than Tannat (I learned that night), it was very tasty.

Next was the 2010 Felix Syrah.  The first thing that hit me was the barnyard or moist earth fragrance.  A lot of pepper.  Very quaffable, as they say in Sideways.

Then came the star of the night.  It was an unlabeled bottle.  Immediate taste of chocolate, along with soft tannins.  Well balanced, and it went great with the flank steak Claudia served.  Juan gave me a self-satisfied smile and told me that it was his 1999 Cabernet Sauvignon/Merlot blend.  1999, huh?  Right around the time the Kanowsky family brought in the harvest.  Whatever, it’s great juice.

Given their prices of $20-$25, Juan’s efforts demonstrate that quality wines can be made locally.

A last note.  Juan and a partner are working on a wine preservation system called Vinum.  Right now it’s just available for restaurants.  But if it’s ever sold at a retail level, check it out.  Most of the wine we had that night had been sealed using Vinum.  They were remarkably fresh despite having been opened days earlier.  Vinum vivit.

“Before joining Eve Wine 101 I wrote articles about wine and the wine industry for a local newspaper for about 1 ½ years.  I also have a blog on my web site with several wine articles and I send out weekly newsletters to hundreds of my readers.  In my Santa Clarita law practice, we have represented both local wineries and several restaurants.  Readers are free to me by email at cjk@kanowskylaw.com“