Old news now, right?  These popular videos, with an even more popular tag to get attention, have come and gone.  But, before I decided to do one about the s— wine people say, I didn’t find a single other video on YouTube.  Yet.

Fast forward to a call out to a few adventurous peeps.  I was surprised when almost a dozen people showed up, willingly, to either be the person saying the s— things or on the receiving line…of said s—. 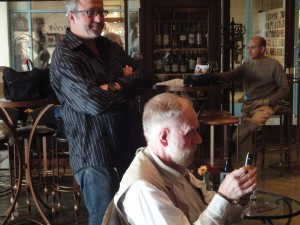 My idea, of several people making several s— statements was quickly abandoned.  No one wanted to be scripted, or have to stop to look at a script.  And lucky for me local winemaker, Roman Weiser (The brains behind the Pour into Haiti event I co-chaired along with him and All Corked Up’s David Schutz) was there to play our director.  Close, at hand, and equally appreciated was our cameraman, with stage experience to boot, John Dickey.

I had the very clever Susie Majesky playing adorable –  no acting needed – to my tacky wino.  The size of my cellar, how I hate long-distance spitters, stupid things we smell in wine and tacky behavior at wine events were all covered in our s— episode.  Susie was so funny!

Episode Two – Local funnyman Duane Harte played the wine 101er to Goddess of Vine Denise Lowe for a lesson on Pinot Noir.  With an emphasis on NOIRRRRRRRRRR.  Following their clever banter Denise is featured alone, swirling and explaining…the art of the left-handed swirl.

Episode Three – Shawn Halahmy, of Shai Cellars, showed up without knowing exactly what we were doing.  Bacchus love him!  Anyway, he ended up playing novice with Denise Lowe, again as the educator.  If you’ve wondered how wine can taste like cherries – watch:

Episode Four – A very quick close-up on the art of tasting and spitting.  If you go to wine events, or a lot of tastings, it’s important to learn how to do this.  Keeps you from inebriation!  The happy spitters, in order of appearance, were Bob Jones, me, Denise Lowe, Shawn Halahmy, Susie Majesky and Roman Weiser.  Can you spit like any of us?

Episode More – At “press  time”  Roman is diligently working to extract more from our two hour-plus impromptu taping…so…stay tuned.  The real s— may be still to come!

Of special note, most of the guests had run through the two bottles of wine that I purchased at Valencia Wine Company, a Pinot NOIR and a Shiraz before getting into two that Shawn had brought from his own Shai Cellars.  Seemed everyone loved Shawn’s wines.  We had his popular Adome blend of Syrah and Cabernet and new Grenache.  Learn more about Shawn, and try his wines here: http://shaicellars.com/ or email him at: shawn@shaicellars.com

Did you miss me? My blogs over the past two weeks were “Vintage Eve” articles as … END_OF_DOCUMENT_TOKEN_TO_BE_REPLACED