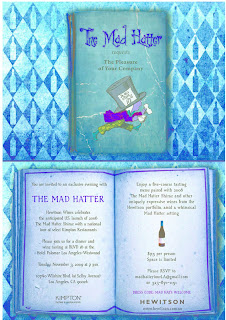 THE COUNTRY GOES “MAD” FOR HEWITSON WINES THIS OCTOBER,

With a series of four wine-pairing dinners held throughout the U.S., Hewitson invites wine enthusiasts to experience its most recent vintage release

(LOS ANGELES, CA; September 22, 2009)—On October 6, 2009, in conjunction with National Mad Hatter Day, South Australia’s Hewitson Wines launches the U.S. release of its highly anticipated 2006 The Mad Hatter Shiraz. This celebrated vintage—awarded 94 points by Australian wine critic and author of the Australian Wine Companion, James Halliday—will be available at select wine retailers and also showcased in a series of wine dinners, dubbed the “Mad Hatter Tour,” held throughout the U.S. at participating Kimpton Restaurants. The first of these wine dinners will take place in New York on October 27, 2009 at 70 Park Avenue Hotel’s “Murray Hill” room, followed by dinner in Chicago (October 28) at 312 Chicago at Hotel Allegro Chicago; in San Francisco (October 29) at Fifth Floor Restaurant & Lounge at Hotel Palomar San Francisco; and in Los Angeles (November 3) at BLVD 16 at Hotel Palomar Los Angeles-Westwood.

Complemented by whimsical Mad Hatter-themed décor, each dinner will feature a multi-course menu from the restaurant’s respective chef, tailored to fit the flavor profile of this single-vineyard wine. The 2006 The Mad Hatter Shiraz will also be available for purchase at fine wine retailers throughout the U.S., as well as on the wine lists of these Kimpton Restaurants.

For more news about the Mad Hatter Tour and launch of the 2006 The Mad Hatter Shiraz, visit www.facebook.com/madhatterustour, which includes event updates and information about upcoming special offers, as well as tasting notes, entertaining tips, and photos. Fans can also follow the “Mad Hatter” on Twitter (www.twitter.com/madhattertour). This celebrated vintage is available at the Chelsea Wine Vault in New York City, select Binny’s Beverage Depots in Chicago, select K&L Wine Merchants in San Francisco, and the Wine House in Culver City, CA.

Hewitson, founded in 1998 by venerable winemaker Dean Hewitson, produces traditionally-made, uniquely expressive wines from the great vineyards of South Australia’s famous wine regions: Adelaide Hills, Eden Valley, McLaren Vale, and the Barossa Valley. Geographically these regions are collectively known as the “Adelaide Super Zone,” and are home to some of Australia’s, and the world’s, most celebrated vineyards—many of them dating back to the 1800s. Hewitson wines are praised for their flavor, balance, and complexity. Find out more about Hewitson at www.hewitson.com.au, follow the “Mad Hatter” on Facebook, or on Twitter at www.twitter.com/madhattertour.