Sometimes, opportunities arise that can’t be passed up.

Even at the expense of missing one of my Cultural Appreciation of Wine classes at Napa Valley College.

The instructor of my Cultural Appreciation of Wine class is Paul Wagner, Grand Poobah of Balzac Communications.

Balzac Communications put on a wine industry trade show featuring wines of the Rioja region of Spain. When the call went you for volunteers to help at the event, my arm went up so fast that I re-aggravated my rotator cuff and I had to be iced down to prevent further inflammation.

I was able to justify skipping school in my own mind, as my Father was down from San Juan Island in Washington. He comes down each year to help with the grape harvest for my small home winery. This year, harvest happened to fall on his birthday, October 3. I had no choice but to treat him like a Cellar Rat for the day. The harvest had to get in and he had to help bring it. And bring it, he did. Did I feel bad for making my dad work on his birthday? Nahhh…… But I was grateful and so I decided a fitting birthday present would be to take him to a wine tasting event at The Palace Hotel in San Francisco.

This event featured some of the best wineries in the Rioja region. Their representatives, or in some cases, the Winemakers, poured 4 wines each. A few cheated and brought more, but I promised I wouldn’t tell anyone.

Wine has been made in the Rioja region of Spain for more than 1,000 years. The combination of a warm Mediterranean influence from the east and the cooler inland climate from the south and unique soils and topography make this one of the great winemaking regions of the world. Rioja is the oldest quality wine region in Spain, gaining Denominacion of Origin (DO) status in 1926. Riojo is also the first,and still only one of the two regions, to be promoted to the superior Denominacion of Origin Califcada (DOCa) status, reserved only for wines of the highest quality.

Front and center, and the predominant native grape of Rioja, is Tempranillo. 75% of the planted acreage in Rioja is Tempranillo. Tempranillo is the foundation on which many wines from Rioja are built. This red grape ages gracefully and results in a beautifully balanced wine in the hands of one of the region’s many experienced Winemakers.

On hand for the event were 16 wineries from Rioja. Each different and unique, but all of great quality and tradition.

I was there to help, so upon arriving, Dad and I were assigned the task of opening the wines to be poured. The aromas were delightful and I can say with great satisfaction that neither myself nor my father gave into temptation and drank directly from the bottles before the tasting event even began.

Participants began to trickle in and when we felt we could sufficiently blend into the crowd, Dad and I grabbed glasses and tried to decide what wine to taste first. So many great Bodegas.

A little about the wines of the region first.

We learned that most of the wineries were pouring “Red Crianza”. This is a type of wine that is from the Rioja region and has been aged in oak for at least one year. A wine labeled Crianza will be a younger wine. Wine labeled as “Reserva” will have been aged longer than a Crianza, a minimum of three years with at least one year in barrel and a Gran Reserva will have been barrel aged the longest. Gran Reserva wine is aged at least 5 years, with at least two years in barrel.

Along with Tempranillo, many other Spanish varietals are used. Graciano, Mazuelo, Viura, Granache and Maturana Tinta, among others.

There were very few white wines being poured, but we found a few.

From Bodega Alicia Rojas, S. A., we tasted the Finca Alicia Rojas first. This is a 2007 barrel fermented wine, made from Malvasia de Rioja grapes. It was aged 6 months on it’s lees in 100% American oak barrels. This wine had a sweet nose for me, but finished crisp and dry with flavors of apple and pear. We both really liked this offering.

We also tasted her 2005 Red Crianza, called Solarce Organic. This wine has aromas of ripe cherry and has a good balance of acid, with an astringent finish.

We next stopped at the table for Bodegas Ontañon, S. L. We spoke with Laine Boswell. She did a wonderful job educating us on the climate of Rioja and the surrounding areas, shedding some light on why the wines of this reqion are so acclaimed.

We tasted the “Arteso” from this winery. It is a 2006 vintage blend of 75% Tempranillo, 15% Grenache and 10% Graciano. The vineyards from which the grapes are harvested are some 50 years old and the wine is aged in new oak barrels and undergoes malolactic fermentation. This wine is rich and full, with hints of the barrel toast on the nose.

We found the marketing of this winery to be one of the best. I am sure that a visit to this winery would be fantastic. They not only have a passion for their vineyards and wines, but also for their history and extensive art collection.

Next was a stop at Bodegas Tobia, SL. We tasted the “Oscar Tobia”, with is a 2005 Reserva, 90% Tempranillo with 22 months in barrel. A lovely smokey nose was accompanied by excellent balance. The star of the show, however, was the Alma Tobia. This 2008 Rose of 60% Tempranillo, 25% Graciano and 15% other grapes (I still don’t know what varietal “Other” is) had 5 months in French oak barrels. Deliciously fruit forward, this barrel fermented Rose has aromas of vanilla and brown sugar and ripe strawberry. This is a very food friendly wine and was my favorite of the show. Psst….this winery is looking for a west coast distributor.

On to Bodegas Viña Ijalba, S.A. Here, we tasted the 2005 Dionisio Ruiz Ijalba. This is made from 100% Maturana Tinta grapes. we spoke to the representative, a very dapper gentleman, who told us that this grape has been traced back to writings from 1622 and was nearly extinct until rescued by Viña Ijalba who planted approximately 6000 vines of this rare and unique grape, propagated from a small patch of 20 vines found in an old vineyard. This wine was fermented and aged in French oak barrels for 13 months and the caramel and brown sugar on the nose are very apparent. Flavors of cherry and sharp red fruit were complimented by a slightly bitter and astringent finish.

One of the most interesting stops was at Senorio De Somalo, S. L. This expressive winemaker spoke no english, but he had a young woman as a translator. Though her, he explained to me that his white wine, made from 95% Viura and 5% Malvasia, was cold settled for 48 hours and then racked to stainless steel fermentation vessels where the temperature was kept to about 58-60 degrees during fermentation to preserve the aromatics of the grapes. This crisp and clean wine resonated of lemon and lime. This winemaker’s voice, speaking in Spanish, was melodic and emotional. He was very passionate about his wines. I appreciated the way he took my glass to pour me a sample. He poured some of his wine in my class, swirling it to collect the remains of the previous wine. He then dumped and poured again, making sure his wine was the only wine in my glass.

My father and I spent several hours tasting, discussing, working as volunteers for the event, eating, chatting with new and old friends and moving from one winery in Rioja to another, all within the confines of a finely decorated room at The Palace Hotel. We learned much of the region and it’s wines and people. I can’t think of a better way to travel, short of actually traveling.

I introduced my Father to Paul Wagner. Remember him? Yeah, he is the guy who teaches that wonderful Cultural Appreciation of Wine class at Napa Valley College. Paul was the host for this great event. Class was later that evening. I told Paul I wouldn’t be making the class.

Of course, he asked my Father to write me a note, excusing me from class.

Next week, back to class. Note, or no note.

You can see pictures of this tasting at:

Anthony Blackburn is a student at Napa Valley College in the Viticulture and Winery Technology Department. He is also the Student Sales and Marketing Intern responsible for selling the wines made by the students in the student winery. www.napavalley.edu/winery 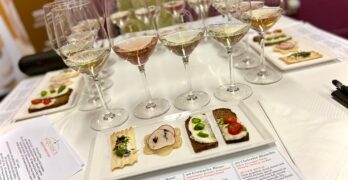 Every year I reflect back on the best wines I’ve enjoyed the past year, and … END_OF_DOCUMENT_TOKEN_TO_BE_REPLACED