MONTEREY, Calif. — Local wine growers said a proposal in California to tax wine $5 a bottle will kill their business, and the California economy along with it. 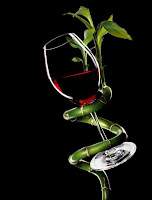 Oh, well, that sucks.  Two buck Chuck will be $7 and still be worth a dime.  And anyone that decides by a margin of $5 will choose lesser quality wines.  (Hmmmm.  Where would that leave them?  I think wine coolers cost more than Chuck.) For me?  I don’t even clip coupons.  Don’t know if I’d notice.

I read that it would go toward alcohol related injuries and damages.  If you’re going to drink and drive YOU should pay for your misdeeds.  But my cellar, that usually is enjoyed from my home, shouldn’t pay for that.


So that drunk driver isn’t being responsible?  Surprise, that’s what makes them get behind the wheel in the first place.  Don’t tax me; take his car, his money, his freedom – but leave my car, money and freedom out of it.

They need 434,000 signatures.  They tried this once before for a nickel increase and lost.  So I’m not too worried.  I’m miffed at the solution, to a real problem, that takes away one of two things California is known for: Winemaking and misbehaving celebrities.  How about we tax celebs for their injuries and non-discretions?  I’d much rather have a lot less of Paris, Mel, Brittany, Kanye and Lindsay than any less wine.

At least they can financially afford their irresponsibility.

What do you think?

LOVINGSTON, Va./PRNewswire/ -- Virginia Distillery Company and members of the … END_OF_DOCUMENT_TOKEN_TO_BE_REPLACED