The simple tweet above led me on a journey from chefing it up at home to analyzing wine paraphernalia as phallic symbols.  Read on, but you’ve been warned. 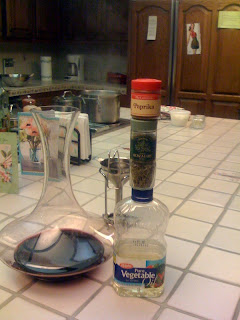 When I tweeted the photo above my caption read: Setting out spices before Chef 101 cooks. Why do I have “unused” ones?  Wrong recipe or too much wine “added”?

A little tough to explain in 140 characters or less in a Tweet but, what happened is that I set out my ingredients in advance, and clear up as I go.  As I get closer to the meal being ready, I have a little wine. At the point that I took the photo I was surprised to have several items still left to be used.  I re-scanned my recipe and didn’t find that I had mistakenly left them out.  As I looked over other recipes on the opposite page I found that I had added in some from two others.

So things, I guess, could have gone worse in my meal.

But what caught my Twitter friend’s attention was that I lacked the new Eve decanter from Riedel.  I knew I had seen it before at tasting events, but I went ahead and looked it up again.

I don’t want to insult the entire Riedel family, especially the Eve this was named after, but I do have problems with this…err…item. 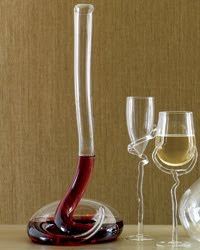 First of all, if you watch the cool video, you will learn that even though it “double decants” your wine as you swirl it after filling, it requires more manual dexterity than a wine 101er may have.

It should be washed in your bathtub as it’s too bulky and fragile for a normal sink.  While you’re in the tub, don’t put any soap inside of it, only on the outside.  And, if that’s not enough, bring a little white wine with you to remove red wine stains.

Then I wondered, what is that little curl at the bottom of it for?  The one that’s either supposed to look like the edge of ivy from Eden or…

A phallic symbol for something that normally requires batteries instead of a bathtub?

And, upon further examination, it would appear that I made my spices taller than my decanter in the first photo.  Would that mean that I was already subconsciously providing my own phallic symbol and am just as guilty as Eve Riedel?

LOVINGSTON, Va./PRNewswire/ -- Virginia Distillery Company and members of the … END_OF_DOCUMENT_TOKEN_TO_BE_REPLACED