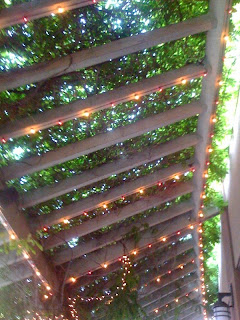 “My wife isn’t here because she’s over working on opening her Roman Holiday wine bar…”  Which begged two questions, maybe three: When is the new wine bar opening?  Why are there so many men at Lee’s Wine Bistro tonight? And, who didn’t send us over a glass of wine to “just try”? (That I made a few tasting notes for you below of, it’s my duty…)

It was a night to definitely “Take it all in”.

Not really planned that way.  It started as just a plan to meet one gal pal – I’ll just call her Double E here – there at dinner time. Going for the patio seating, when it was still hovering near 100 degrees, was brazen enough.  (We like the ivy-covered trellis!)  Ordering the 07 Hess Chardonnay be kept in an ice bucket seemed more than apropos, as did the ”Choose your own gourmet cheese” plate and, just to make sure we too had enough to call it dinner, the hummus and olive tapenade.

We sipped and savored.  Lee Yoon, the owner of the Bistro, checked in with us while we enjoyed the buttery nose and sharp, refreshing taste of our Chard.

Soon, we got an eye full of guests that brought their own wine (Chuck and Marca Johnson) that wasn’t subject to a corkage fee.  We learned from other guests that opened a bottle from their own private locker at Lees, or brought one in, that they could all be enjoyed without a corkage charge.  I think the deal was that if you had a locker there you received this privilege.

Friends that came and went through the course of our evening included full-o-personality and wine-ish plans, Doug Gould and his strikingly beautiful date, Sommelier George Skorka and Mark Kallen.

Morris Thomas and John O’Connor were leaving as we were arriving, but we stood and gabbed until we missed our wine…too much.

C. Pat O’Brien brought his own wine in too, and sent over a glass for us to try.  He apologized as he feared that having to leave it in his car for 20 minutes, though in the shade, may have hampered it.

His 05 Kenwood Cabernet Sauvignon had a nose full of tannins but a smooth taste, some dried cherries, while my pal noted black licorice and white pepper.  We did have to agree that the heat might have affected the outcome.

Then we hit the mother load.  Robert Schwartz walked in.  Wine Royalty in my book.  He had a cellar I was itching to get into and he now knew it.  He’s going to have his wines paired with food created by Oaks Grille Chef Daniel Otto, for a “Top Chef of SCV” event on October 15, just to kick off Soroptimist International of Greater Santa Clarita’s Sip, Stroll and Savor event that weekend.  (I should be volunteering, join me one way or the other www.sigscv.org)

He said he would call me to have me come and write about the pairing.  Hopefully he, or someone he knows, will read this and remind him.  Or, I’m back to stalking him.

Robert sent us over a couple of glasses of a 2000 Chateau Belle-Vue Haut-Medoc Bordeaux.  It had a huge, perfect nose, lovely tannins, ready to drink for me.  Robert explained that it was not a first growth and could go one or two more years in the bottle.  He thought it a little boring.  (Now you see why I gotta see his cellar!)

We chatted about wine and events and mutual friends, thoroughly enjoying ourselves.  But it was soon time to leave.  And, almost as an afterthought, we wondered where all the women were that night.  They certainly weren’t next door at the cigar bar…where they all working to open Roman Holiday wine bar?

The one teaser – in the beginning of this rant – about the new wine bar proved to be nothing more, I only put it out here for you to know that it is indeed coming, and to get your feedback.  (Yes, I know you prefer e-mail than commenting on this blog.)