I have a cozy place in my firefighter wife’s heart for George Thomas, the owner of Route 66 Classic Grill, and it isn’t fueled by his creamed corn and vodka martinis alone.  George has once again decided to host an event, with none other than SCV Councilman Bob Keller as emcee, that honors all first responders…with a celebrity car show, a band  and a complimentary dinner: 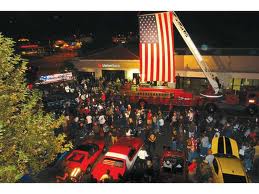 The Classic Car Show will feature the Smokin’ Cobras, a great 50’s band, and the Hollywood Star Cars.  A variety of cars from television and films such as Batman, Back to the Future, the Love Bug will be on display! Also on display will be a fully restored 1949 NYFD Search and Rescue, Power Wagon.

Santa Clarita City Councilman Bob Kellar will emcee the 9/11 Tribute which will include a Bagpiper & Drum Team. Millena Hicks will lead us in the National Anthem, while the Los Angeles County Fire Department slowly raises a huge illuminated American Flag, with their ladder truck.

Route 66 encourages Active Duty Military, Firefighters and Police Officers to attend and enjoy a complimentary dinner from 5-10PM. Join us on September 10, 2011 to help show the world that “We Will Never Forget 9/11”…