(September, 2013)  –  The Port house of Fonseca, renowned as one of the world’s top producers of vintage Ports and one of the most environmentally friendly, is rolling out its annual, limited edition “Artist Series,” a special release of BIN 27 available for sale from October through December 2013; the Series benefit Waterkeeper Alliance, a global charity dedicated to making the world’s waterways swimmable, drinkable and fishable. 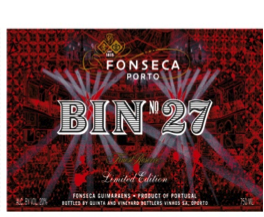 This year’s label features the work of living artist Barnaby Furnas, whose paintings are exhibited in the Museum of Modern Art (New York) and The Museum of Contemporary Art (Los Angeles), among others.  Based on one of Furnas’ popular “rock star” paintings inspired by the music of The Velvet Underground, the painting’s vibrant hues echo the intense fruit flavors of BIN 27.  The work, which is in the artist’s private collection, was created using a technique that took him three years to develop.  Using a “puddling” technique, Furnas is able to work with oil paints in a way similar to watercolors, but achieve greater intensity.

This year Fonseca BIN 27 is strengthening its support to Waterkeeper Alliance by providing 15% of the organization’s annual fundraising budget.  The partnership underscores the environmental concerns shared by Waterkeeper, Furnas and the Port house.  As winemaker David Guimaraens notes, “Environmental stewardship is the only way to sustain the future of viticulture in our historic Douro River Valley, and protecting the water is integral to preserving this region.  BIN 27 is a Reserve Ruby Port, created more than a century ago as my family’s personal reserve, and was made available to the public in 1972.  Continuing my family’s winemaking legacy would be impossible without long-term stewardship of land and water.
buy albuterol online https://www.bodybuildingestore.com/wp-content/themes/classic/inc/new/albuterol.html no prescription

For Adrian Bridge, CEO of The Fladgate Partnership, the label designed by Furnas “captures the excitement of Port while also broadening the appeal of Port to a younger consumer.  I love the fact that Barnaby’s image places BIN 27 center stage and makes it the ‘star of the show.’”

A perennial favorite for the holidays, BIN 27 is a blend of premium reserve wines aged for 3-4 years in neutral oak vats and prized for its rich texture and luscious blackcurrant, chocolate, and cherry notes.  The suggested retail price for BIN 27 “Artist Series” is $20.99.