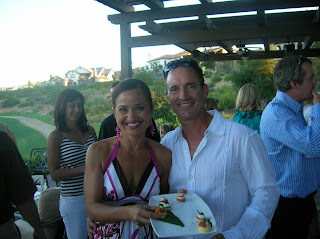 Guy, Thank you again for including me, and Signal readers through me, into your elite event last night. Meeting winemaker Mitch Cosentino and tasting his wines along Chef Otto’s fine cuisine was no less than stellar! Yours, in wine and out, Eve

Sending a thank you to my wine guru, Guy Lelarge of Valencia Wine Company, isn’t always in order for me as, well, I figure I will be thanking him in 1000 words or less afterwards. I can’t tell you how much I appreciate the Signal for getting my foot in the door at the classiest wine events in Santa Clarita and beyond. So, for those of you that are living precariously through my foot, here goes.

Greeted on the patio by the always, how-do-they-do-it attractive staff of Tournament Player’s Club (TPC) Valencia, we were given not a one or even a two ounce pour of Mitch Cosentino’s crisp 2007 Novelist. Everyone would be enjoying at least a four-ounce pour of all 5 wines that evening, when two ounce pours are the norm, that were especially paired by LeLarge and Chef Daniel Otto.

And, not to be outdone, Chef Otto had paired plenty of appetizers, not even on our menu, to enjoy with the wine while watching the last golfers find their paths home. “I try the wine and then decide how to pair, it’s like a marriage.” Otto said.

“The appetizers complemented the wine perfectly,” said Larry Mazzeo and Jennifer Haberer. “They really had a great variety”. That variety included no less than caviar, Ahi tuna, lobster and duck canapés as well as skewers of coconut shrimp with sweet Thai chili sauce and filet mignon.

“Mitch is a master of golf and winemaking,” Commented guest Graham Higton. “He had spent the day here golfing without a single complaint in the 100 degree heat.” Fortunately for us the heat had been replaced with cool breezes and waning sunlight.

Dave and Nancy Bossert told me of their September event to support SCV art. “We are pulling out all of the punches for some star power,” Bossert began. “George Scribner has created a piece titled ‘Better use a sand wedge’ just for guests purchasing tables at the event”.

Kenny McMann and Jeanie King seemed to be sporting tall iced glasses in one hand and wine glasses in the other. Before I could presume they were two-fisted drinking with other libations, Kenny raised his glass above his shoulders to prove the clearness of the water he preferred to keep handy.

Dan and Heather Deffenbaugh, the latter looking tanned and crisp in a beautiful satiny halter while the former preferred to wear his designer shades on top of his full crest of glossy hair, were gracious in holding a tray of appetizers for me. We were then ushered into the main dining room for our first course before I could cause any more trouble.

“I want to introduce you all to a great man, my old friend and great speaker Mitch Cosentino.” Lelarge announced to the full room.

“Generally I get invited to a lot of dinners per year and can only do 10. This is the only one I’m enticed to do every year. We’ll have a good meal at a good location. Looking over the menu tonight I want to jump right in.”

That was quickly followed by a Chilean sea bass over hummus and spinach paired with Cosentino Pinot Noir Sonoma 2006. The first red of the evening brought out the subtleness of both the fish and the hummus.

Our main dish, Australian rack of lamb went with Cosentino Napa Cabernet Sauvignon 2004. An awesome pairing; as the chef’s choice of an Australian lamb brought out the cab flavors.

To finish us off we enjoyed dark chocolate soufflé that I saturated with crème anglaise and my most favorite wine of the night, Cosentino ‘Cigar Zin’. And the reason it may have been endeared to me was that I had found myself an Eve Wine 101 reader that liked it too. “It’s absolutely wonderful.” commented Robert Parker, while all I heard was, “Your column is absolutely —.” Or so it can be when served so well…