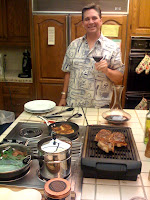 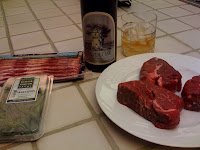 When you marry a firefighter you learn that all that all of the “events” don’t actually occur when they are on a 24 hour shift. Valentines Day, birthdays, OTBN don’t take place when your loved one is blissfully laid back in a vinyl recliner in front of a 56 inch screen TV with nothing but a remote to cling to.
So you…pretend…that it didn’t take place for you either.
That was my plan. I’d open something (from the list a couple of posts down) for myself and really dedicate my blog post to the uninterrupted tasting. But…some non-winey people got in the way.
Earlier in the day I had decided to finally see Slumdog Millionaire (only escapist films take place when said firefighter is not on shift) and sent out an e-blast to a few friends. I got two church ladies, one husband and my sister. (The latter formerly of White Zinfandel fame.)
After the film, and so needing a drink, I raced home and pulled out the Joseph Phelps new Freestone label 2006 Pinot Noir. (Jammy at first pour.) Eddie had generously left that choice out for me. Not what I had in mind for OTBN but more than adequate for my guests and my fridge fare of cold pizza, artichoke dip and chips, cheese and crackers, one sliced apple, cut watermelon and some brownies end pieces. (Yes, they were all leftovers from another church party – for the kids that time.)
The guests were gracious about the wine, we discussed the film, all were equally put off by the violence of the film and the…watermelon.
I was left hoping for a redux the next night. I told Eddie what had happened and he agreed to have OTBN again on Sunday just for us. We decided to have a 1998 Silver Oak with dinner. During that morning I went on Facebook and lived through a friend’s OTBN:
“We also made it into a movie night. My husband surprised us all by opening an 02 Hart Cab, an 03 Chateau St Jean Cinq Cepages (which was still massive!!), an 04 Justin Isosceles and topped it off with an 05 Sea Smoke 10..we had a great time enjoying all of the above! We had a small gathering … Michael (the hubs), our oldest daughter, Tawnee, Michael’s mom, Pat, and his Aunt & Uncle, Nikki & Tom…We did however manage to finish all of the bottles! Lots of water was on hand and we started early!”

I read the above to my husband and, unable to wait another minute for the N of night in OTBN, we headed out to a local wine bar and started with Dampierre NV Champagne and Chateau De Candale Bordeaux .

From my iPhone Wine Log program the abbreviated tasting notes were as follows:
Chateau De Candale Bordeaux 2005: Soft nose, soft tannin, subtle fruit, pomegranate, balanced,earthy, Bordeaux character, approachable. (Larry M. contributed to these tasting notes. We both bought a couple of bottles.)
Dampierre Grand Cuvee NV Champagne – perfection as always, and quite the nose tickler.
From the wine bar we went over to Bristol Farms. While Eddie (yes firemen are the best cooks) chose the Filet Mignon, fresh beans, potatoes, bacon, garlic, eggs, lemon, some kind of green leafy looking spice that might have been … tarragon to make my Bearnaise sauce, I ventured into the wine department.
(For you local yocals I found that they are doing Thursday night Wine and Food Tastings starting this Thursday March 5 from 6-8pm with J Lohr wines, Trio of Brie cheese, poached salmon with Bearnaise sauce, roasted sweet potatoes, prosciutto asparagus, fruit sorbet with apricot tartlet. March 12 is Bogle, March 19 is South American – primarily Argentina and Chile – and March 26 will be Sauvignon Blancs. Reserve by calling the catering department: 284-5970.)
When we finally got home for Ed to cook, I decanted my Silver Oak and hungrily waited for the chef to say it was time. (You can see by the photos that the chef was cleansing his palate with Balvenie single malt Scotch and was in no hurry to appease said wife.)
So, after a lot of pretend-helping in the kitchen I had finagled my first glass. More iPhone tasting notes:
Black cherry nose like a rush of a fire engine’s hose, tannin on first taste, long finish, zinfandel qualities, clear garnet color. It was an A+.
And I did manage to save save a glass, or two, for the meal Eddie had prepared. It turned out to be a perfect OTBN. Even though I had to clean up the saddest thing in the world: an empty decanter waiting for the next OTBN…