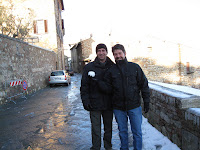 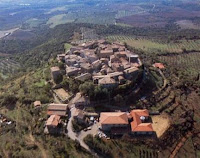 The day after Christmas 2008, we found ourselves in Florence, Italy for one week as a result of having found an outrageously low airfare offered on the Internet. This time my wife and I took the opportunity to introduce another couple, who had never been to Italy before, to Tuscany during the 2009 New Years Eve celebration known as Cappodanno.
After a few days in Florence the decision to make a road trip for an overnight stay into the Chianti region came easy. The four of us squeezed into a bright yellow Fiat cinque cento and drove south on Route 222 (pronounced due-due-due) from Florence towards Siena. Skirting around Siena, we headed south to Montepulciano, home of the famous Nobile di Montepulciano.
Despite the fact that Montepulcino is a higher elevation than its neighboring hilltop villages, we were surprised to find the remnants of a recent storm had blanketed the village in snow. Montepulciano consists of a series of steep narrow stone streets that test the uninitiated – especially when covered with snow and ice.
However, you are rewarded for your efforts with numerous stores, restraints and entoca (wine bars). After fortifying ourselves at a small Osteria, we were ready to walk in the village, around the corner we ran into a local vintner named Adamo of the Contucci winery who asked us we would like to tour his winery and taste his wines. The weather had driven off the usual visitors in the area and we found ourselves alone with Adamo who was happy to show us the wine of his village.
The Nobile di Montepulciano prominent grape is (Prugnolo), the local name for Sangiovese, which is blended with the red Canaiolo grape to make wine. The wine is typically aged for 2 – 3 years in oak barrels and has the distinct rich flavor of the region – undertones of smoke and cherries with a good depth which gets better with age. After tasting numerous wines we purchased the 2004 Contucci reserve to take home with us.
We rented rooms for the night in Montalcino so we headed west driving by Pienza and arriving in Montalcino at sundown.
Brunello di Montalcino is reputed to be one of Italy’s greatest wines. The village is devoted to their wine. Montalcino was prosperous under Siena, but after the Medici family took control of the region the town became weak.
The village of Montalcino regained fame in the 19th century, when the Biondi Santi family created a rich, fine, dark red wine, calling it “the brunette”. The Sangiovese grape clone Brunello, which is a strain of Sangiovese, has a deep brown skin. Brunello is aged at least 4 years, the reserve at least 5 years. The aging process gives the wine a rich, deep, powerful structure.
We checked into Palazzina Cesira, a 13th century residence modified as a bed and breakfast. We met our gracious hosts, Lucilla and her American born husband Roberto, that were a wealth of information – seemingly knowing everything and everyone in the region. We took notes of this for future travels in the area.
Roberto referred us to an excellent restaurant that we ate several times called Il Grappollo Blu under the helm of Luciano served incredible local cuisine at reasonable costs. In Montalcino the typical Tuscan foods such as pici ai funghi porcini (local pasta with porcini mushrooms), ribollita (twice cooked bean/vegetable soup) and Cinghiale (wild boar).
Also with the advice of Roberto we found Enteca Piazza. There we met Nicolo who, although one of the youngest wine purveyors in Montalcino, offers more than 70 different Brunellos for tasting. By the time we had left, educated in Brunello’s by Nicolo, we had purchased bottles of ’97 Fontebuia Reserve, ’97 San Giacono, ’97 Asisano and ’99 La Rasina at wholesale prices.
We look forward to our next journey in September, and exploring in depth the region and what it has to offer to local vintners and foodies. For a week’s adventure in Tuscany – enjoying all the simple pleasures such as friends, food, wine, new cultures, meeting friendly people along the way – it made our whim holiday on a budget seem as though we were away for months living a rich, beautiful life (la bella vita).

MOORESTOWN, N.J./PRNewswire/ -- Wines 'Til Sold Out (WTSO) has a new kind of … END_OF_DOCUMENT_TOKEN_TO_BE_REPLACED