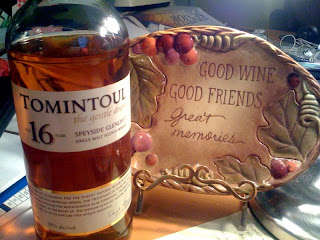 There’s a new Scotch shouldering its way into my liquor cabinet, threatening the alphabetical order of the rows, behaving like the brash teen that it is and taking more than its fair share of bravo calls: Tomintoul 16 year old.
I didn’t find it “the gentle dram” from Speyside as the labelling predicted at a recent single malt Scotch tasting. The guests were still reeling over my Littlemill, that I had promised would be the king of the evening with it’s gentle coloring and light, yet full taste, when I introduced them to Tom.
Tom was like a broad smack of hazelnuts in the entire mouthfeel. Something I could sip on during the holidays instead of an entire pumpkin pie. Tom had the aggressive hue I was used to. Tom was my new home.
When the guests had sampled the 6 Scotches we had laid out, and headed back to my Littlemill, I went for Tom. My forward example allowed for them to re-sample too and comment on the striking differences.
You may recall from the last tasting that I had put my name on that bottle of Littlemill, thinking I wanted to save some for later. It was funny for the guests to see me do that. This time I wasn’t taking any chances. The Littlemill and the Tom were deftly removed from the tasting arena, and the paying guests, and stowed away in a secret location. (Right behind me on a wine rack – but these guests didn’t notice wine at all that night.)
I’ve written about our home Scotch tastings before in this blog. You can search “Scotch” if you want to know how it’s done. If you want a funny, newbie perception of it, read this from one of my more snarkier guests that night: http://thedailysnark.wordpress.com/2009/04/14/isnt-scotch-a-guy-thing
For me, well I’m going to make sure Tom isn’t causing a riot in my liquor cabinet. I know, it’s only 7 in the morning but who knows if 1. Eddie put Tom in his luggage for his upcoming trip to Vegas or 2. I drank it all last night and that’s why I can’t stop talking about it!

LOVINGSTON, Va./PRNewswire/ -- Virginia Distillery Company and members of the … END_OF_DOCUMENT_TOKEN_TO_BE_REPLACED