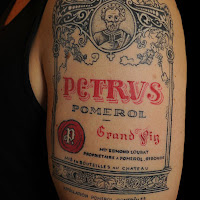 Dan Aykroyd’s Sonoma Project is on Page 81 of the May 31 edition of my Wine Spectator.
I’ve always loved Aykroyd…but not to the point that I can write his name easily. Only to the point that I know he’s not Bill Murray. He married the hot actress from Bosom Buddies while Bill Murray scored Scarlet J. in the movie Lost in Translation. Guys I could do tequila shooters with. In my wildest fantasy? Yea, maybe a Sangria. Oh…wait…that’s the other wine aficionado/actor/old hot Spanish dude.
Yes, that would be Antonio Banderas and he has a winery too. Or, what I actually read, “was stung by the wine bug”.
I get it. Just like when Brad Pitt adopted New Orleans and his wife adopted a child from every country under the charm of UNICEF…having a celebrity champion a cause brings it to the forefront for the masses.
We’re the masses.
But, forgive me if I’m wrong here. I don’t need a celebrity to show interest in my cause. I’m just wondering if other Wine 101er’s do. Because it’s no longer just the Aykroyds and the Banderasses (pun intended).
We have a New Kid On The Block: http://la.racked.com/archives/2009/04/30/ed_hardy_wine_is_just_the_tip_of_the_iceberg.php
The Ed Hardy brand, of amazingly colorful tattoo art fame, is now putting said art on wine bottles…at Whole Foods market. The LA Times says the wine “isn’t half bad”. Does that mean Wine Spectator would rate them at about a 50?
I think anyone with a wine interest, and a million-friggin’ dollars worth of money and taste, can hire a great winemaker. The winemaker can purchase the best grapes and be given all that he desires to make wine.
But Hardy? Known for tattoos, clothing and wine…gee…does that mean that I would want to get a tattoo of a wine bottle on my rump in exchange? That we are on the same page in relation to wine interests? Am I being a snob here?
Somethings are too bizarre.

The KFWE is the destination for wine and food lovers alike, affording … END_OF_DOCUMENT_TOKEN_TO_BE_REPLACED