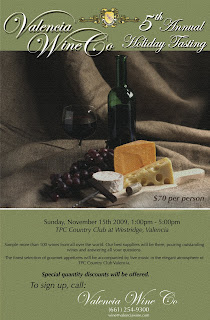 (This story originally ran last year, in our local newspaper, written by yours truly. I’m running it today to give you a chance to read how it went last year and to also remind you that the event is limited to 200 guests. If you still need tickets contact Valencia Wine Co at 661-254-9300)

Lucky enough to attend Guys Lelarge’s fourth annual holiday wine tasting event I had the opportunity to taste some very high end wines while be entertained by some of his happy guests.

The week before, Lelarge’s distributors were unable to get through to TPC due to the horrific fire and subsequent freeway closures. I came to the event that day, wondering for myself if I should bring some wine, and was met in the parking lot by the man himself. He planned on spending the day talking to his guests that had been able to get through, apologize in person for something well out of his control, and extend invitations for the following week.

So, on this Saturday, he was rewarded with a full house of guests; made thirstier by the weeklong wait.

“We did it again,” Lelarge explained. “The finest, the most high end, the best variety of wines from around the world are here.”

My own tasting notes marked several high priced wines to try that I’ve never seen poured at a tasting and included, but weren’t limited too (as I might have missed something):

“I recommend that you try the Bodegas Mauro.” Said guest Oliver Thomas that I knew well from the wine bar. The Mauro was a favorite for Sandi Gordon as well, “It fits my tongue like a glove”.

Guests raved about the Chateau Trocard Bordeaux Blanc 2007 reasonably priced for less than $20 and the La Rioja Alta Vina Alberdei 2001, again for less than $30. There were to be plenty of wines available, just as appreciated, as their more expensive counterparts.

Paul Young, selling his Rhone varietals exclusively to Lelarge in Santa Clarita had decanted a wine not on his list: Clos St Jean Chateauneuf du Pape 2006 created by winemaker Philippe Cambie. As it’s rare to see a decanter at a massive tasting such as this, it created quite the hub.

We then sampled Schild Barossa Shiraz 2006 that consistently had been awarded 90 – 96 ratings from Wine Spectator (WS) magazine throughout the years. From there we tried a Cigale Meritage, a Wayne Thomas Petit Verdot 2005.

We lingered over the Hinton Pinot Noir 2004 and then moved onto a Chapoutier Crozes-Hermitage 2007 from France. I savored the dusty Tohu Sauvignon Blanc 2007 run by the indigenous people of New Zealand, the Maori. Proceeds from the wine sales helped support Maori programs.

Summerland was given an ‘A’ for their Pinot Noir Santa Rita 2006 by several drinkers. Other domestic wines we enjoyed were the Sbragia Merlot Home Ranch 2005, Pope Napa Valley Zinfandel 2005, Angeline Alexander Valley Cabernet Sauvignon 2006 and a Bridlewood Estate Syrah 2004 that well deserved its 92 WS rating.

Running into local winemakers, Tomas and Jenny Lukas, Tomas introduced me to his friends, Derrick and Maureen McKaughan. We drank together for awhile until the sun dipped enough in the sky for us to know that our day had come to a close. No smoke swept the sky this time, fortunate for us all, though having the same event in a week wouldn’t have been too terrible.

LOVINGSTON, Va./PRNewswire/ -- Virginia Distillery Company and members of the … END_OF_DOCUMENT_TOKEN_TO_BE_REPLACED