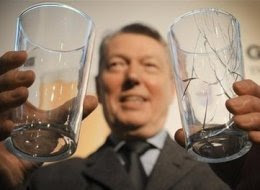 Other interesting tidbits about our friends across the seas:

Officials swore the country would save billions in health care costs by coming up with a glass that doesn’t double as a lethal weapon.

There are about 87,000 alcohol-related glass attacks each year.  Half of all violent assaults in Britain are alcohol-related and it has become common for drinkers to smash glasses and use them as weapons, he added.

Am I the only person surprised by this?  It’s rather shocking.  Do we have bar fights in the USA that even compare?  Are there just many more beer bars in Britain?

I really don’t mean to turn this into a jest, but, maybe they need more wine bars, wine education, wine shops, etc.  You never hear of a “wine brawl” or someone smashing their Reidel stemware into someone’s jugular do you?

If we break a wine glass it’s because we can’t balance it, the stem too dainty…or, as the case may be, we’ve had too much.

But winos don’t ram a glass into another winos eyeball.