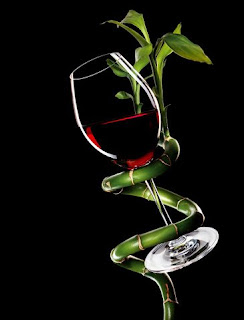 Last year I had this half-brained idea to actually work one night in a wine bar for charity.  I figured I had plenty of first hand knowledge, friends that would come to watch me sweat and favors to call in from the various non-profits I’ve supported in 15 years worth of columns.

I asked Guy Lelarge, owner of Valencia Wine Company (VWC), if he’d let me.  I asked the Reverend of my Unitarian Universalist church, Ricky Hoyt, if the congregation would approve.  I asked my husband if he thought it was a good idea.  Everybody said yes…but everyone also snickered…a lot.
Kevin Osborne, VWC store manager, trained me on the wines I would have to pour by the glass or flight a few weeks ahead.  VWC employee Julie Mino would work with me and manage the food orders and register.  Guy would “help” if needed.
I put the event of Facebook, sent out press releases and had it in the church’s newsletter.  Then church president, Allan Hauptfeld, seemed to take delight in announcing the event at the end of church services when he got to read the tagline, “Eve will be your lackey for the evening” that I myself had written.
Since I was starting early, 4pm, many friends could come before or, as I thought I could make it to 9pm, after dinner.  Some guests that couldn’t attend came during the day to buy a bottle or two and told Kevin to include in the evening’s grand tally.
I arrived early, put out a couple of balloons leftover from an event I volunteered for the day before, and prepared myself…by having a big ol’ glass of wine.
A couple dozen church pals filled the patio, a few more inside.  A few movers and shakers of Valencia showed their support throughout the evening.  Fellow wine blogger, Denise Lowe, came and wrote a blog post that I’ll will leave you with.  Hope it’s enough of a teaser to get you to me on 4/27!
Denise Lowe
Headed up to Santa Clarita Monday afternoon for a fund raiser at the Valencia Wine Company. My FB friend, Eve Hammond Bushman – blogger extraordinaire – was acting as wine server to raise money for her SCV Unitarian Universalist Church. We arrived early, of course, and wandered around the store, reading wine labels and trying to decide what we wanted to drink. We settled on a Bordeaux from Saint-Emilion – Chateau Comte des Cordes 2006. 75% Merlot/25% Cabernet Sauvignon. Dee-lishus! Deep ruby, pale around the edges; nose full of earth, leather, mushroom, toffee; mouth full of earth at first, but opened up and got gorgeous red fruit; nice acid/tannin balance. $34.99 We also purchased a combination cheese and meat plate, a nice charcuterie comprised of 2 types of salami, prosciutto, 6 different cheeses, marinated olives, mini dill pickles, and a plate of water crackers and lavosh. All we needed was some chocolate, and the experience would have been complete!

Spent some time with Rusty Sly, one of Eve’s friends and co-bloggers. He’s very knowledgeable about corks, and has written extensively about corks and why we should keep using corks. He’s also in the earth/space science industry and actually contributes to the labors that go on around shuttle launches and such. A well-educated and opinionated (in a good way) nerd. We liked him a lot – and he must have liked us, as he treated us each to a 2 oz. pour of Mollydooker 2008 The Boxer – a huge Shiraz from MacLaren Vale. It was too much after the elegant Bordeaux; big and jammy; opaque red/black color, smoky, peppery nose; a real fruit bomb with a nice helping of black pepper. And 16% alcohol! Extremely extracted – cherry, pomegranate. Needed a steak or leg of lamb to go with it.

Also got to meet John Carter – not from Barsoom or ER – but from Bar Parts, an online retailer of everything you could possibly need for being in the wine or beer or spirits industry. Last year when I joined WineShop at Home, I ordered plastic dump buckets from him. They didn’t arrive with the rest of my order, and when I called and asked about delivery (as I had tastings scheduled), he said they didn’t come in and he was sending me better quality buckets. In fact, he sent me 2 gorgeous stainless steel buckets that are much more attractive and durable than the plastic ones would have been, and they’ve doubled as ice buckets several times as well. Another nice connection to make. He asked me for info about WSAH, and said he would feature me on his blog. Nice!

Meanwhile, Eve was going back and forth, serving wine and taking orders, and sipping something red while she was doing it. It was fun to watch, as she has never actually waited tables, and was surprised at what a sweat she was working up! We were very amused, and made fun of her because we could. We rolled out of there around 6:30 or so – it was still light out. A pleasant way to end the day!

Press Release
On Tuesday April 27, from 4 to 9 PM, Santa Clarita’s very own wine 101 writer will be struggling alongside the professionals at Valencia Wine Company on Town Center Drive for a percentage of the evening’s sales to benefit the work of the Unitarian Universalist Church of Santa Clarita.
“Last year’s event was such fun I readily accepted Eve’s offer to do it again,” stated Guy Lelarge owner of Valencia Wine Company.  “She writes about all of our local wine bars, events and charities with such passion…why not support her for a change?”  And to this, Eve has already prepped the readers of her Wine 101 blog, the West Ranch Beacon, Elite Magazine, Facebook, Twitter and subscribers to her Dear Wine Friend newsletter with this teaser: “It’s that time again…to watch me sweat over a simple corkscrew.”
If you would like to support the fundraiser, and are unable to attend between 4-9pm, you may come anytime after 10am and mention your purchase should be included in the evening’s tally or send your tax-deductible donation to the UUofSCV, PO Box 800028, Santa Clarita, CA 91380, with the words Eve’s Wine 101 written in the memo line.  Eve can also be reached at ebushman@earthlink.net or via any of the publications listed above.