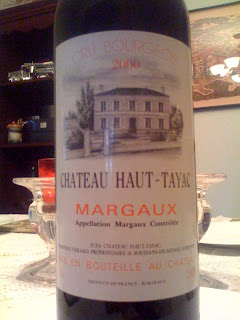 In the film, A Fish Called Wanda, Kevin Kline lets out very long “Disappointeddddddddddddd” when the safe he’s just cracked is empty.  But, if he had our view, he would’ve seen how much more so was Jamie Lee Curtis as she held a blunt object over Kline’s head that was sure to do damage.  Curtis had hoped to get what she wanted from him and quickly dispatch him to the cold asphalt floor.  By far, Curtis, albeit silent, was the more disappointed of the two.

When husband/chef Eddie had been busily making Beef Stroganoff for dinner, he was also doing damage to a Joseph Phelps 2002 Merlot.  Using the age-old excuse that he had to use quite a bit for cooking…I got maybe one decent glass out of it.  And, as we were going to have the 2000 Chateau Haut-Tayac Margaux (pictured above) with dinner, I didn’t feel cheated.  Yet.

(I also didn’t make any written notes on the Merlot.  My memory serves it up as a very balanced, enjoyable wine.)

So, back to my Bordeaux.  We took it straight from our 56 degree cellar and poured a small taste.  Color: Brown.  Nose: Tannic, but something was more off on the nose.  Quickly we decided to decant.  There was very little sediment in the bottle and the cork pieces that had broken apart when I opened it, were caught in the strainer I had placed over the decantor.

We waited a few more minutes.  The nose was now a full-blown can’t-hide-from mildewed, moldy, burnt oak, raisin, oh dang it: corked as corked could be.

But, as dinner was in full swing, and my pest wonderful husband had already drank most of the Phelps Merlot…I simply couldn’t talk him into opening another bottle without sounding like a lush.  Disappointed?  If I’d had a nice mallet handy we wouldn’t even be having this conversation, I’d be in jail.  If he hadn’t cooked the meal we wouldn’t be having this conversation, I’d have even more to complain about.  If he read this blog we wouldn’t be…alive.

(FTC disclosure: We purchased both bottles, one from our wine club membership at Joseph Phelps and the other from a retail establishment.)