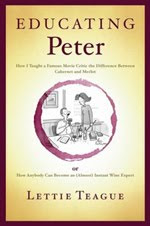 I really wanted to like this book.  First of all because I found it at the 99 cents store so I didn’t have to pay the $25 hardcover price, and second, it would prove to be an easy read that I could learn something from…along with her movie-making movie-obsessed wine 101 neighbor Peter Travers, film critic for Rolling Stone.

It was also published in 2007, and there’s nothing worse than a wine book, especially one that deems to rate current releases, that is more than 5 years old.  Lettie Teague, an editor for Food And Wine Magazine, had a book on the cusp…

Not before Travers and Teague both thoroughly pissed me off though.

In her witty attempts to describe Travers’s wine knowledge, and then educate him using hers, she insults him behind his back.  Undoubtedly he knew she was doing this and isn’t the one responsible for getting the book to the public for only a buck.

On page 63 Teague also takes on and insults the wine knowledge of powerhouse writer Mary Higgins Clark.  (Never read her but read enough to know how prolific she is.)  Clark served her “real deal Chablis” at “the wrong glacial temperature”.  And this conclusion is only based on a story Travers relays to Teague.  Slander?  Hearsay?  Stop the presses Madam Clark?

Travers, in his incarnation or caricature, draws comparisons between wine and film almost every chance he gets – or every time Teague quotes him.

Some of those quotes are innocuous while others are far-reaching.  I get that a wine can be like a film, more likable after 10 years.  But a specific film to a specific wine?  Again and again?  By page 50 all I thought was, You’re killing me Larry Peter.

But it’s Travers that gets invited to visit Argentina (Page 130) and Burgundy’s Laurent Drouhin (Page 69) after showing extreme politeness and interest, not Teague.  Does she take this out on him by putting him in his place in the book?

When I could get past the parts that irritated me I did read a few things I’d like to share with wine 101 peeps:

Can’t tell the difference between a bottle of Bordeaux or Burgundy?  The former has square shoulders to catch sediment, the latter has sloping shoulders.  An Alsace, has an aromatic “perfume” shaped tapered bottle.  A Magnum is best for aging.

Besides basic wine knowledge Teague goes through each country and their wine regions educating Peter.  Some chapters include regions she likes and/or specific wines.

All in all, once I stopped feeling insulted because Peter was getting on my nerves too, I learned a little.  About 99 cents worth.  Lemme know if you want to borrow, or just take, the book.

LOVINGSTON, Va./PRNewswire/ -- Virginia Distillery Company and members of the … END_OF_DOCUMENT_TOKEN_TO_BE_REPLACED