(I looked over this website and thought it very refreshing to find with it’s section called Peeps and Players, art, press and, of course wine.)
SWANSON LAUNCHES NEW WEBSITE
www.swansonvineyards.com 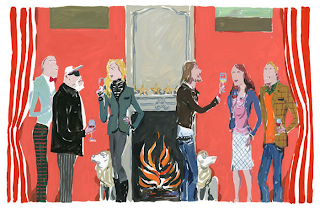 Rutherford, CA, July, 2010—Swanson Vineyards has launched a new website. “We’re presenting a new and lively face for our wines with our new website,” explains proprietor W. Clarke Swanson. “This fresh approach with our website characterizes Swanson as a winery with elegant lifestyle choices, which is expressed by the detail and personality of our new site,” he added.

The website will offer new material each month, such as the essentials of the instant wedding, the instant summer cellar or the instant party. Another feature of the website is Alexis’ Napa, a blog written by Alexis Swanson Traina, full of tips and her personal point of view, whether it’s the taco trucks of Napa Valley or her favorite drives. Her blog will also include profiles of San Francisco Bay Area personalities in a section called Peeps & Players: currently featured are Katrina Markoff, Ira Yeager, Trevor Traina, Andy Spade, Thomas Britt, Jean-Philippe Delhomme, Torryne Choate and Sam Godfrey.

SWANSON VINEYARDS
While the Swanson name is recognized for the famous frozen dinner brand the family launched in 1953, W. Clarke Swanson founded Swanson Vineyards in 1985, planting mostly Merlot on 100 acres of Oakville estate vineyards. Today, Swanson Vineyards is the largest producer of estate-grown Merlot in that appellation.

THE SWANSON FAMILY
Clarke Swanson’s family has a long history associated with agriculture. His grandfather Carl A. Swanson was a Swedish immigrant who settled in Omaha, Nebraska in 1896 and subsequently built into an agricultural empire of poultry farms and creameries.  His sons Gilbert C. and W. Clarke Swanson joined the family business, evolving the company into the business of processed frozen foods, later making history with the production of the “TV dinner” and other convenience foods.  In 1955, Swanson and Sons was sold to Campbell’s Soup Company.

W. Clarke Swanson Jr. enjoyed a successful career as an entrepreneur in community newspapers, radio broadcasting, cable television and banking before founding Swanson Vineyards in 1985. Clarke’s wife Elizabeth, a fifth generation New Orleanian whose mother was Cuban, is a vital force at the winery, described by Swanson Traina as the “dream maker, tastemaker, opinion-maker and keeper of the most special fairy dust.”

Also available both online and at the winery are unusual proprietary bonbons and caviars. These include wild American caviar in two-ounce or half-pound tins and farmed American osetra in a two-ounce tin. Alexis Swanson Traina collaborated with Chicago-based Katrina Markoff of Vosges Haut Chocolat to produce the Alexis bonbon, a velvety heart of exotic cacao melded with Swanson’s Alexis Cabernet Sauvignon, dusted with curry.

ANDY SPADE
Andy Spade co-founded Kate Spade Handbags in 1993 with his wife Kate Spade, bringing his extensive background in advertising to the enterprise. In 2008 he established Partners & Spade with Anthony Sperduti in a storefront and studio on Great Jones Street in the NoHo neighborhood of lower Manhattan. The studio produces films, books, apparel and conceptual products as well as marketing and branding projects. The storefront, open on weekends to the public, presents a constantly changing group show of artwork, objects, collections and ideas generated by an ever changing cast of collaborators.

JEAN-PHILIPPE DELHOMME
Jean-Philippe Delhomme is a painter and illustrator whose work appears in The Los Angeles Times Magazine, GQ USA, GQ France, GCasa; he has published several collections of drawings (the latest is The Cultivated Life, from Rizzoli). He has also directed animated films and has published three novels as well as contributing articles to Architecture Digest France and GQ France. He also writes a blog, The Unknown Hipster. More also at http://unknownhipster.com/.